Few lights are on at the Vision, an 18-story high-rise in West LA, suggesting to some that it may have a number of vacant units. Photo credit: Walter Dominguez

Thousands live on the streets of Los Angeles and many others struggle to pay high rents. Yet, more than 100,000 units reportedly sit empty across our city. So four councilmembers have proposed a vacancy tax on property owners who keep rentals vacant.

This is one of the few housing proposals that appears to have support from people on both sides of the housing divide.

And it may provide an answer to the question many of us have pondered as we watch all the new residential towers going up in LA: Does anyone actually live there? 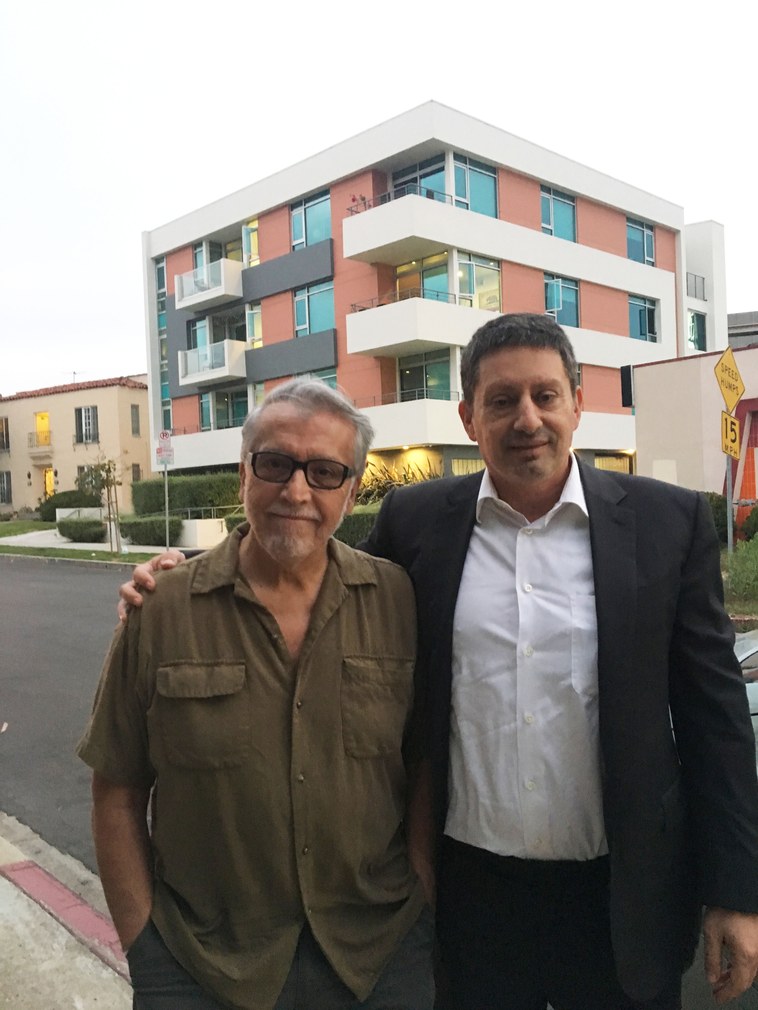 As the sun sets on a cool Thursday evening in West LA, Walter Dominguez and Brad Kane hit the streets. For the past two years, they’ve been driving around their West LA neighborhoods, apartment hunting. But they’re not in the market for themselves. Instead, they just like to count the windows.

“You can look up and see the building, more than half the lights are not on,” Kane said, pointing up at the Vision, an 18-story high-rise on the corner Wilshire and Crescent Heights Blvd. “It gives you a good idea, that our estimate of about 40-50% vacancy is about right.”

Dominguez and Kane look to a building’s windows to get a sense of how many people live there. They believe that in many of the new and expensive apartment buildings going up all over LA, a high number of units sit vacant. Kane said the practice began after he started noticing how many of the new buildings in the area were often dark.

“It became a thing and we started talking about it,” he said. “And to make sure we weren’t crazy, we started driving around to compare notes.”

Dominguez and Kane are both active in their Mid-City neighborhood, South Carthay. Kane is president of the Pico Neighborhood Council as well as the South Carthay Neighborhood Association, while Dominguez, also involved in both, serves as the urban affairs committee chairman. They have been fighting for historic protections as well as to restrict new development that they feel negatively impact their community.

“[Our] entire neighborhood is vulnerable to destruction,” Dominguez said. ”These are virtually all rent-controlled housing. [They’re] also beautifully historic, built with the wonderful craftsmanship of the time.” 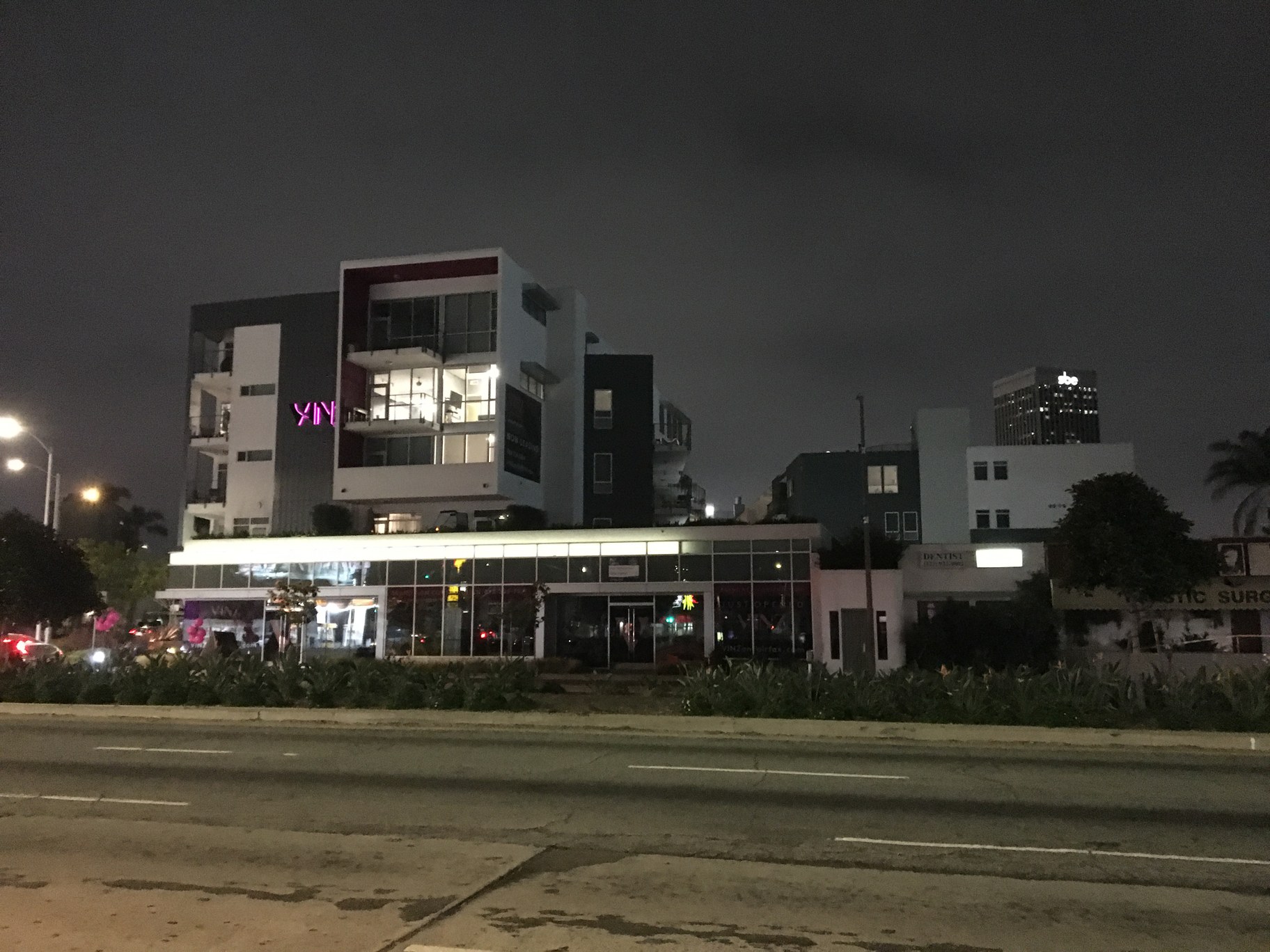 View of the Vinz at night from across Olympic and San Vicente Blvd. Photo credit: Jon Reed

One of the buildings they often check in on is the Vinz on Fairfax. It’s modern industrial chic, with apartments that surround a shared courtyard and pool. It opened in April of last year, with monthly rents ranging from $2,850 for the lowest-priced studio all the way to $6,500 for the highest-priced two-bedroom apartment. Walking along the sidewalk next to the building, it did appear that many of the units weren’t occupied.

According to the website, 18 of the Vinz’s 144 apartments are available. One of the property managers, who actually lives on-site, confirmed that they’re at 91 percent capacity.

Buildings like the Vinz have made Dominguez and Kane wonder, perhaps like many other Angelenos, how can so many expensive apartments keep getting built? Is there that much demand?

Stephen Basham, of the real estate analytics firm CoStar, says yes. He points to downtown as a prime example. 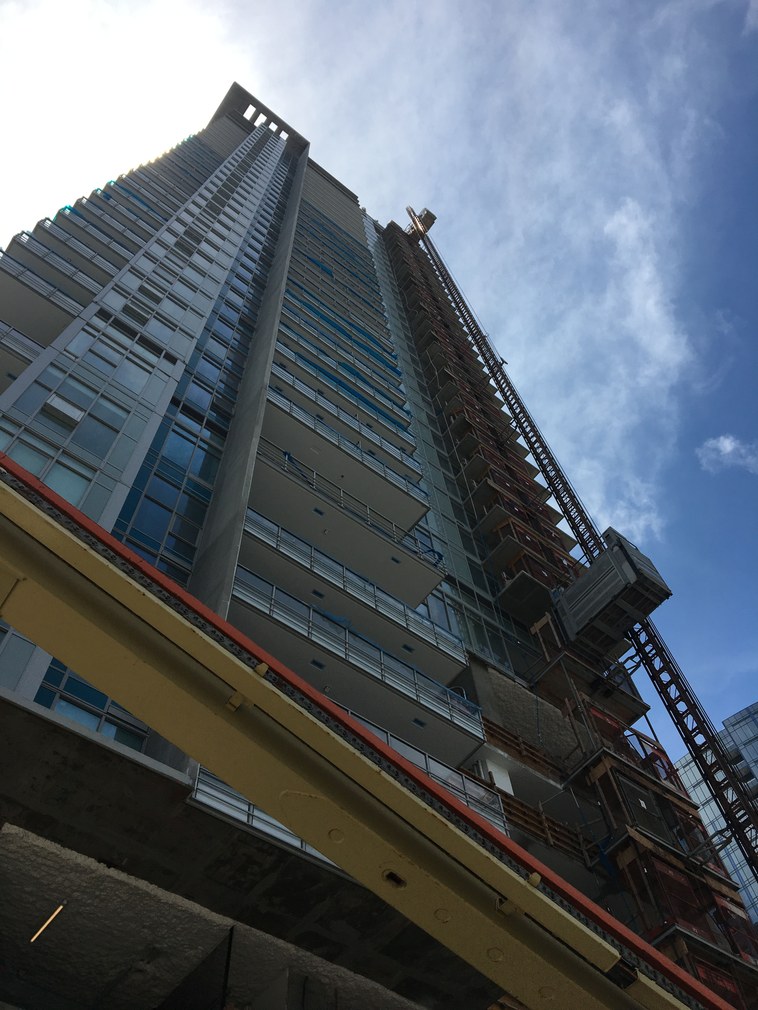 LA last year built more housing than any other region in the state, especially in the luxury, high-rise category. Here, a luxury tower is going up in Downtown. Photo credit: Jon Reed

Basham notes that even with all the new construction, the overall vacancy rate in LA County remains low at 3.8%, which is below LA’s historical average.

Basham’s data, however, only tracks market-rate apartment units -- not single-family homes nor affordable housing -- and he counts roughly one million market-rate units, which translates to about 38,000 vacancies.

“I think that kind of gets at the question here, why do we see low vacancies but a lot of vacant units? It’s really because you’ve had a ton of these projects deliver in a very short time-frame. And the demand for them has been very strong, they have leased up quickly.”

Alina, a 30-story steel and glass tower on the corner of Ninth and Flower downtown, helps explain what is going on.

The building opened last December. It has 344 apartments, of which roughly 53% of them are rented, according to property manager Diana Hong. Hong said they believe they’ll reach 95% capacity by this December.

“We've been doing really well [and at] the rate that we've been going lately, we're crossing our fingers that we can be successful by October,” she said. 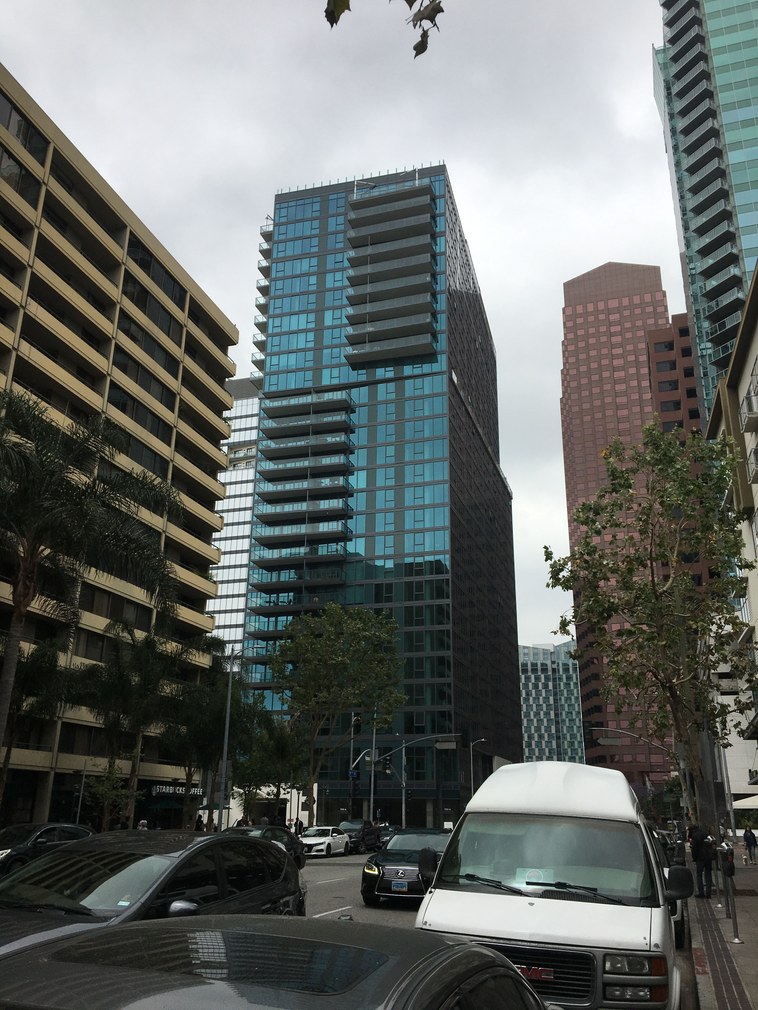 Alina, a 30-story tower on the corner of 9th and Flower St. downtown, currently has a vacancy rate of about 47%, but is expected to fill up by December. Photo credit: Jon Reed

Hong also said that most people who rent at Alina don’t simply hold on to apartments as second homes, they live there. Still, the property reserves 10% of its apartments for corporate leasing, which might account for some of the darkened windows.

Across LA, other types of rentals sit unoccupied in older, multifamily buildings and single-family homes. There are enough that City Councilmember Mike Bonin, along with three of his colleagues and various groups of housing advocates, want to target them.

Last week, they announced a proposal to tax landlords with empty housing units. In his announcement, Councilman Bonin cited census data that suggests LA has over 110,000 unoccupied rentals.

While the city has not yet determined how to apply the tax, the ultimate goal is to make more apartments available and, if that doesn’t work, at least raise some revenue to put towards building affordable housing. It is one of the few strategies that has received support from people on both sides of the housing debate.

A vacancy tax has been tried in a number of other places, such as Paris and Vancouver, and was recently approved in Oakland. 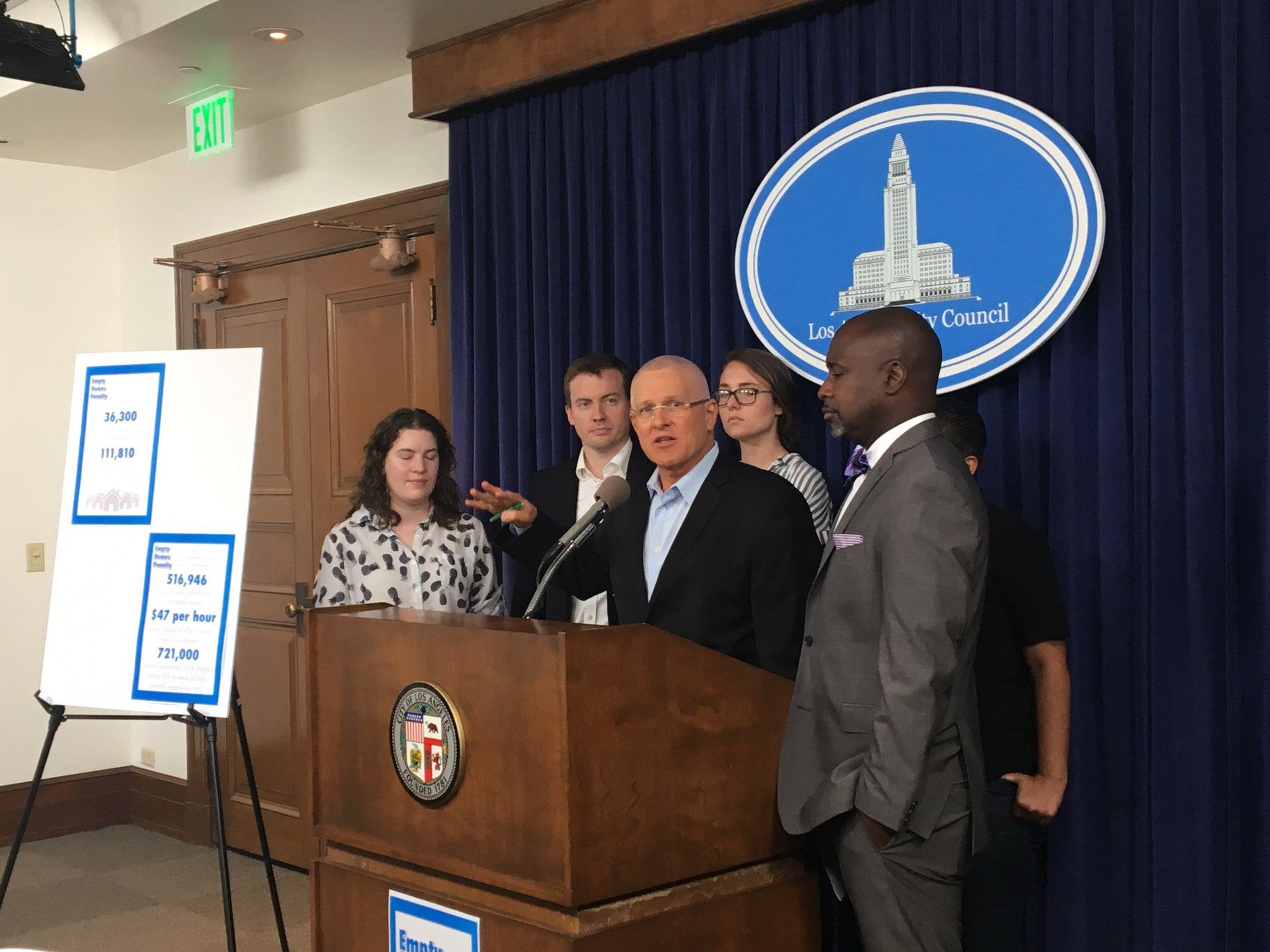 But in order for the tax to be successful here in LA, there first needs to be solid data on what is really going on, according to Paul Sullivan, a tax specialist based in Vancouver. He noted that city officials there had initially estimated the number of vacancies was around 25,000, but later found it was closer to one third once they did their own research.

“Before you spend millions of dollars implementing a new tax -- especially in a vast city like LA -- make sure it’s gonna be meaningful,” he cautioned. “It’s very expensive to do and very expensive to maintain.”

While the vacancy tax could do some good here in LA, many who’ve explored it argue that the real problem is much deeper.

“The ultimate problem is that we just simply don't have enough housing to go around to everyone who wants a home,” said Michael Castle Miller, a legal and policy advisor and CEO of Politas Consulting, “That means that the homes that are there go to the people who can pay the most for them.”

As for Walter Dominguez and Brad Kane, our empty apartment spotters, they think the vacancy tax is worth a shot.

“There’s a Chinese saying about a crisis is a combination of the symbols for danger and opportunity,” Kane said. “While we’re in this crisis, we also have an opportunity to do some good.”

Once that happens, maybe then they can stop spending their nights counting dark windows.

Thousands live on the streets of Los Angeles and many others struggle to pay high rents. Yet, more than 100,000 units reportedly sit empty across our city.