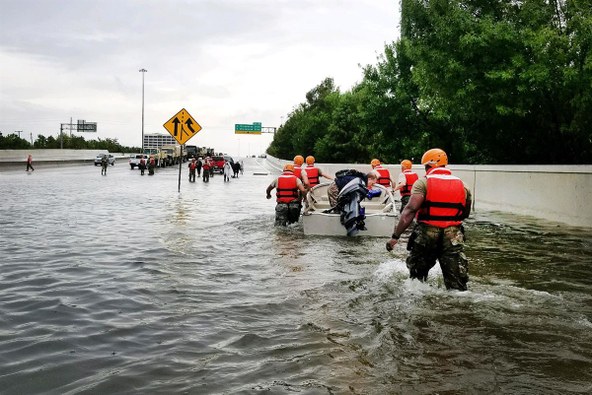 Texas National Guardsmen rescue a resident by boat during
flooding caused by Hurricane Harvey in Houston.
Photo courtesy of the National Guard

Hurricane Harvey, now a tropical storm, is dumping torrential rains on Southeast Texas. Severe flooding has caused a number of deaths and left thousands displaced from their homes in Houston and surrounding towns. This is Houston's worst flood but not its first -- the country's fourth largest city deals with floods about once a year.

Is there something about the region's design and planning that makes it susceptible to flooding? Wesley Highfield considers the impact of runaway construction in the fast-growing city, and explains how infrastructure, hydrology, and how you build on the floodplain affect your chances of staying wet or dry.

Texas National Guardsmen rescue a resident by boat during flooding caused by Hurricane Harvey in Houston.