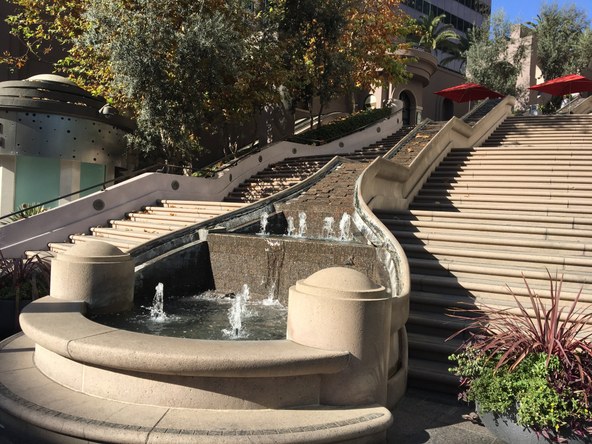 At the dedication ceremony for the Bunker Hill Steps in 1990, the designer,
landscape architect Lawrence Halprin, said, "Great cities are not made by
automobiles, freeways and high-rises. Basically they are made by open
spaces and the people who use those open spaces.
Photo by Avishay Artsy

Look around you today and you will see that landscape design is transforming our infrastructure: the High Line in New York for example, or the remaking of the LA River, or plans to cap our freeways. You can find the roots of these environmental makeovers in the work of the great American landscape architect Lawrence Halprin, whose Modernist parks helped animate downtowns being gutted by urban renewal, in cities including Portland and Seattle. Halprin also designed the Bunker Hill steps and several parks in downtown Los Angeles.

Halprin drew inspiration from the great outdoors and his backpacking trips in the High Sierra, as well as the world of dance: his wife Anna Halprin is a renowned choreographer and dancer. Together the pair initiated a process of participatory design that also shaped the profession.

Lawrence Halprin died in 2009 but many of his parks are being neglected or altered, and his fans want to draw attention to his work. Right now you will find around Los Angeles gallery shows, performances and talks celebrating Halprin's work. DnA producer Avishay Artsy reports.

Amazon’s headquarters in downtown Seattle Photo by Megan Farmer/KUOW Cities are finalizing bids ahead of Thursday's deadline to apply to host Amazon's second...

At the dedication ceremony for the Bunker Hill Steps in 1990, the designer, landscape architect Lawrence Halprin, said, "Great cities are not made by automobiles, freeways...