Then the Trump administration enraged him so much that in 2016 he started painting and drawing cartoons of the president and his allies and posting them on Twitter, with witty, angry captions.

Now a collection of more than 100 of those images have been framed and put on display at Maccarone Gallery in Boyle Heights, in a show called IndigNATION: Political Drawings by Jim Carrey, 2016-2018.

Jim Carrey talks to DnA about what drove him to take up political cartooning and why even people who can’t draw should take up art.

Veteran gallerist Michele Maccarone explains what attracted her to Carrey’s “urgent” images and how the show has tapped into her own personal and career “crisis” over what constitutes “art.”

Carrey got a start in visual art while a child in Canada, drawing with his mother on a train. Even then he was a performer, and showed them off to other passengers.

He was, he says, “shameless, absolutely shameless and still shameless in that way. Mostly I just want to show that I'm another flawed, whacked out human being but that I can kind of have fun with the form you know. That's what I've always tried to offer people is freedom you know; freedom from whatever stuck ways they were thinking.”

He tells DnA that finding expression for feelings is what matters, whether through a performance on stage or a line on paper.

Jim Carrey spoke to DnA just before the November 6 election. And at that point he said, “I hope I have no reason to draw another political cartoon.”

The political landscape has shifted since the midterms, but the president’s love of divisive rhetoric appears undimmed, and so Carrey is still busy drawing. 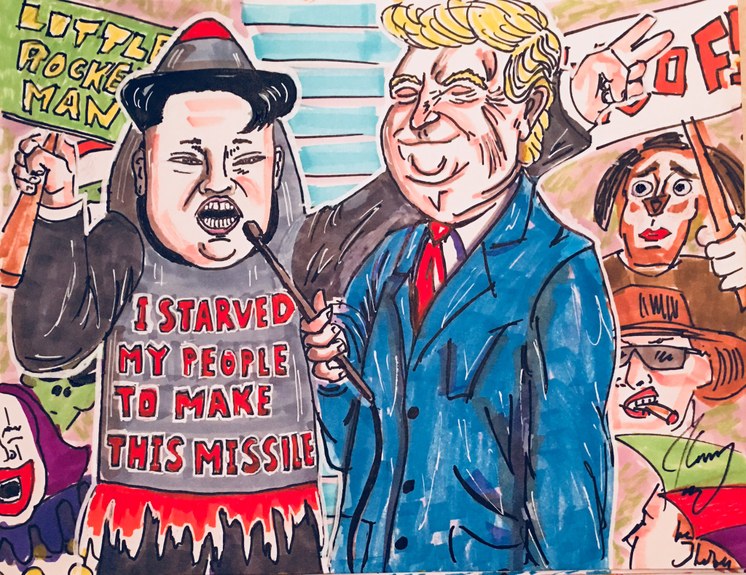 The more than 100 images on show at Maccarone show a range of artistic skill, from somewhat crude to more complex. But they burst with urgancy and “indignation” and he has a knack for capturing likenesses -- of Trump, Putin, Giuliani and many other characters on the current stage.

“When I look at the show, I see the beginnings and I go ‘wow.’ It was rather crude right out of the gate and I've slowly started turning into an actual cartoonist,” he said.

And would Carrey like some attention from Trump, in the form of a lawsuit or an eviscerating tweet? 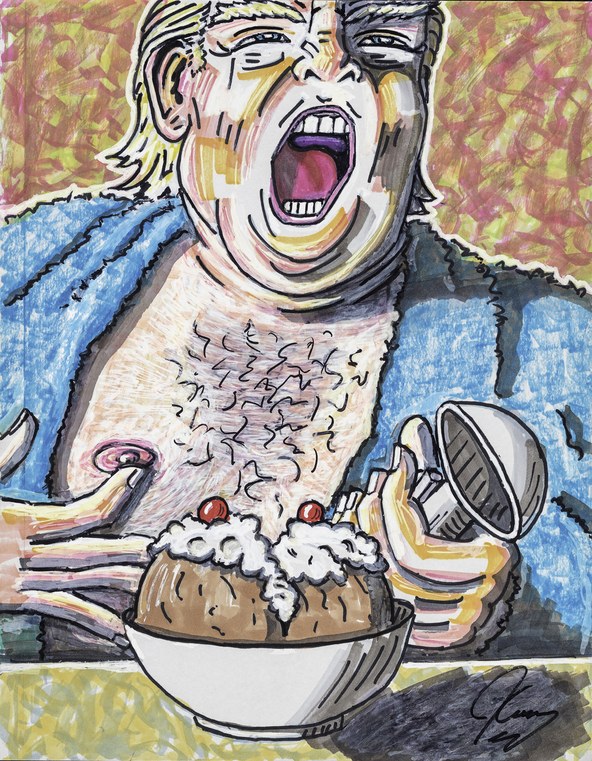 Now of course a question comes up in connection with this show: would Maccarone gallery owner Michele Maccarone have been attracted to these images if they weren't by Jim Carrey?

She says she shared his fury at the Trump administration. But if an unknown artist had submitted them to the gallery, would she have even given them consideration?

“I wouldn't have seen them unless they were on Twitter. And the reason why they were so visible on Twitter is because he's a celebrity. So it goes hand in hand. And I just felt that there was such an obsession and fury to it,” she said.

Maccarone says the Carrey show has drawn a whole new audience to her gallery, one that’s not necessarily tied to the art world.

Her trademark shows to date had been in her words, “rigorous, conceptual, contemporary, sometimes political, sometimes formal, sometimes groundbreaking.” But recently the Barnard-trained art historian and gallerist has been rethinking her artistic values.

Saying she is going through a “professional, emotional, personal, crisis,” she finds the art world has become so rarified that “I don't know where I belong in it anymore.”

How far will you go to land your dream house, when you are in competition with many other buyers and some can plunk down a massive deposit or pay in all cash?