This Saturday, DnA, de LaB, and the LA Forum are presenting a walking tour of West Hollywood in memory of John Chase, dear friend, astute writer of books about L.A., and longtime urban designer for the City of Hollywood, whom we featured on an episode of DnA when he died last year. Using smarts and an exuberant personality, Chase worked with the often arduous planning process to help shape the fabric of West Hollywood. The tour will stretch over the day and will include readings of Chase's work by fans and friends. DnA associate producer Alissa Walker, who helped to produce the walk, passes along a few highlights of the tour, which you can RSVP for here. 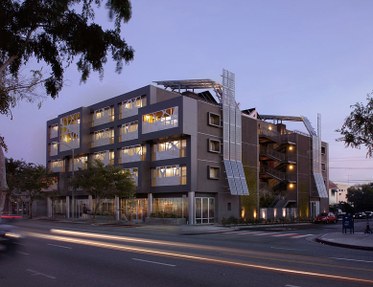 Sierra Bonita Affordable Housing designed by Patrick Tighe, one of the many projects John Chase helped make a reality. Photo by Art Gray

Redesigning the Los Angeles of 1947

L.A. Noire is a video game released today by the company that brought you Grand Theft Auto and Red Dead Redemption. It was created for Rockstar by Team Bondi in Sydney and...

This Saturday, DnA, de LaB, and the LA Forum are presenting a walking tour of West Hollywood in memory of John Chase, dear friend, astute writer of books about L.A., and...

END_OF_DOCUMENT_TOKEN_TO_BE_REPLACED
KCRW's Power in Numbers Drive: Today, your dollars will be doubled up to $25,000, thanks to the generosity of Paul & Renee Haas.
Give Now
Give Now