The Los Angeles County General Hospital was considered a state-of-the-art institution when it opened in December 1933 amid the Great Depression. The 19-story, 1.5 million square foot, historic Art Deco goliath was designed by the same architects behind the Bob Hope Patriotic Hall and the Hall of Justice. It started off as a trauma teaching hospital with over 800 beds, and trained generations of medical professionals.

“It's an icon within Los Angeles in terms of its visibility and its presence. Certainly on the east side, but anybody that is driving on the freeway will see this building in this complex. It's a formidable structure,” says Adrian Scott Fine, director of advocacy at the L.A Conservancy. 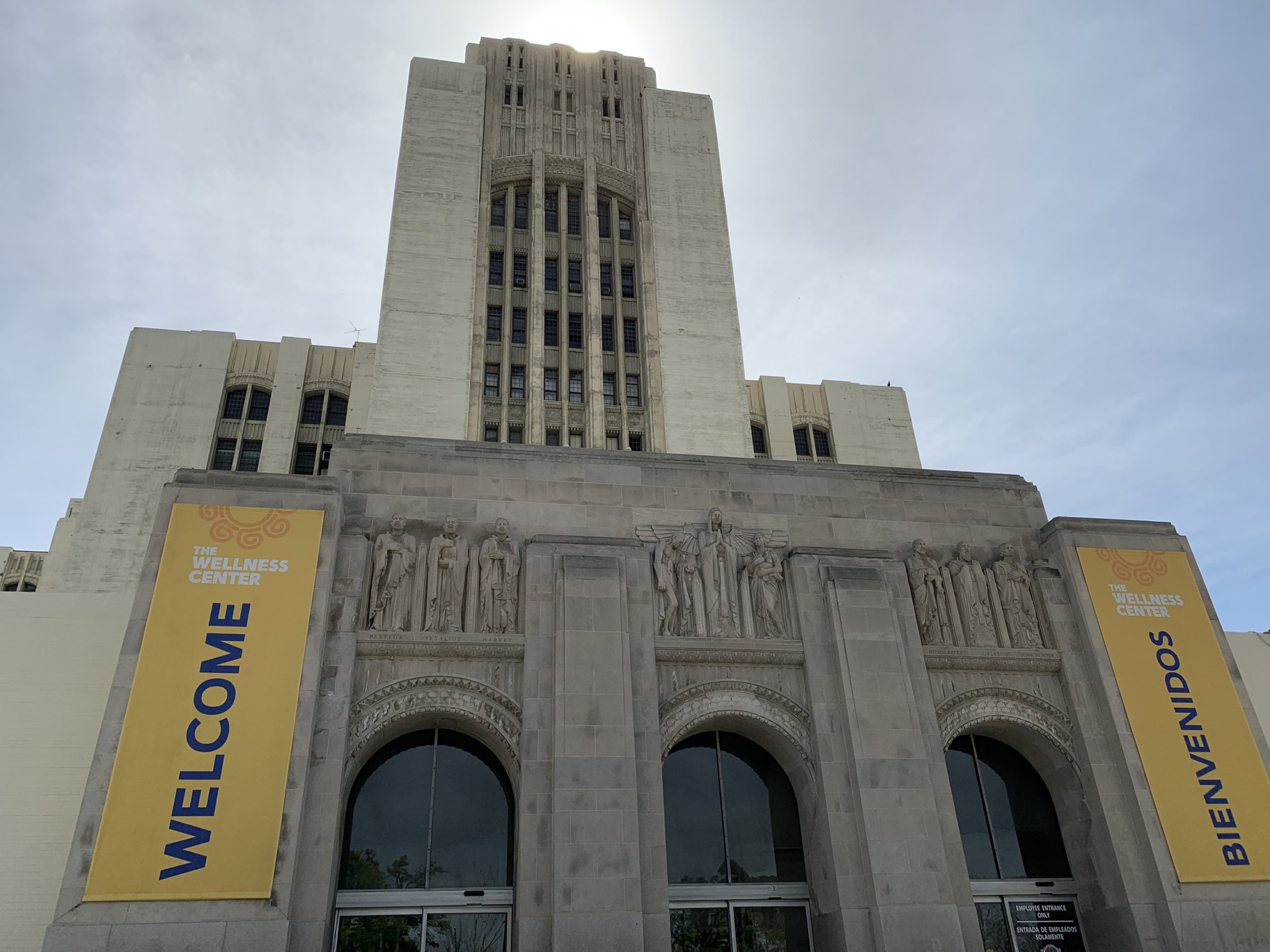 Inside the hospital, ceilings boast intricate artwork by Hugo Ballin, whose other works are at the LA Central Library and the LA Times building in downtown.

The hospital is currently eligible to be listed on the National Register of Historic Places. Thus, the hospital itself and the tunnel connecting it to the west campus area are considered historic and cannot be demolished. 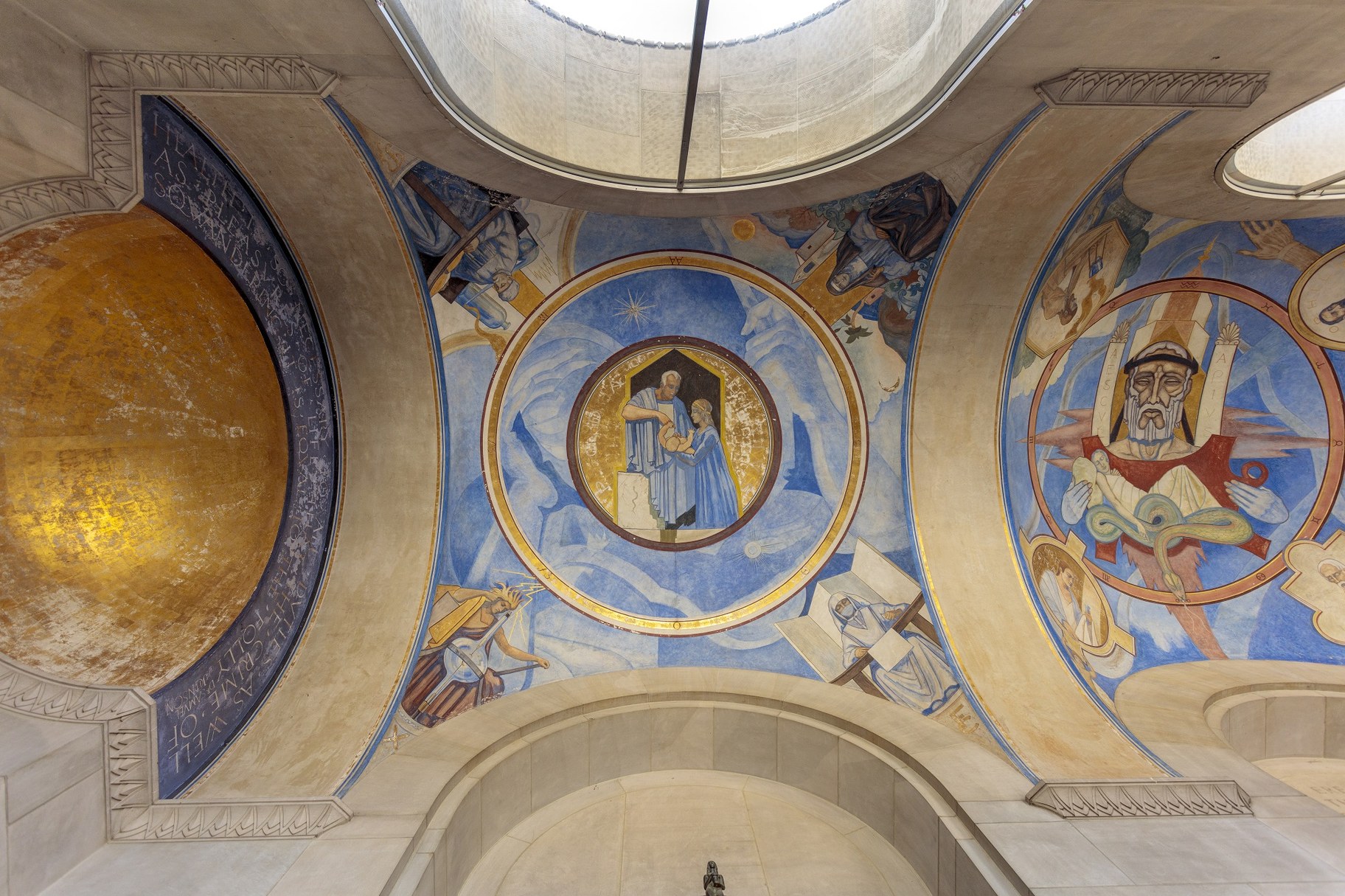 Inside the lobby, when you look up, you can see Hugo Ballin’s only public fresco: Asclepius (Apollo’s son who could bring the dead back to life) and his two sons, Podalirius and Machaon, are on either side of him depicting the medical sciences throughout the ages. Photo by Laura Kondourajian/KCRW 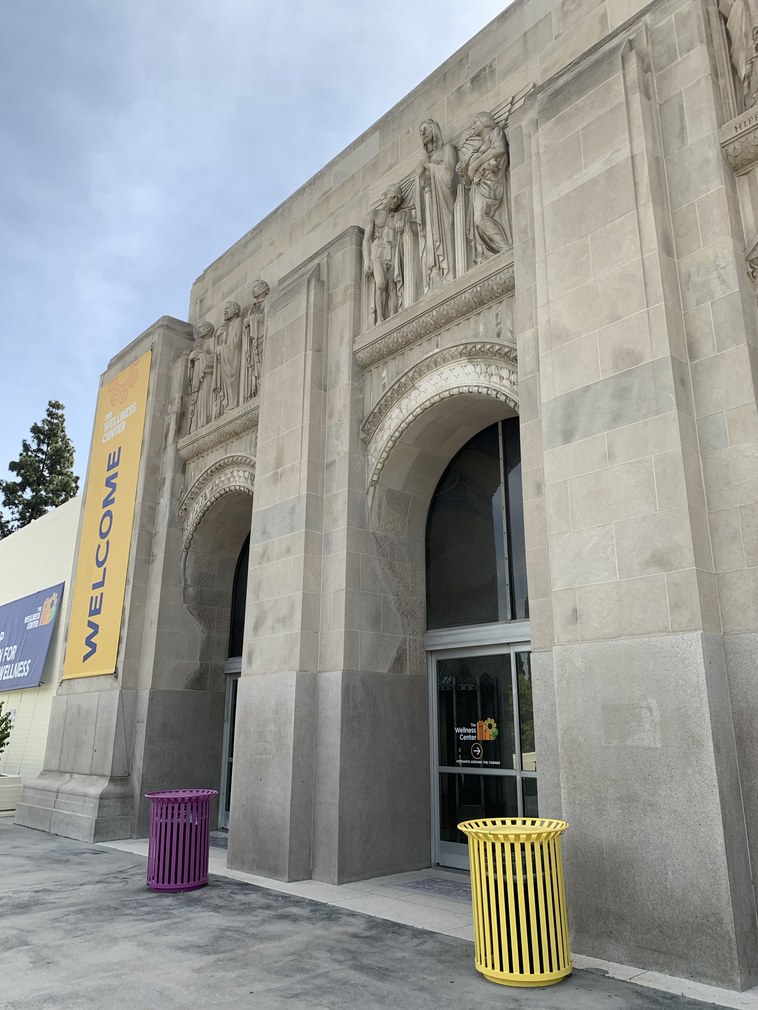 The front entrance of the Old General Hospital. Before you walk into the employee lobby, you’ll see statues of historical greats that have contributed to medicine, such as Louis Pasteur, Andreas Vesalius, and Hippocrates. Photo by Laura Kondourajian/KCRW

Fine points out that in the 1970s and 1980s, some advocacy groups protested outside the hospital in the hope that LA’s health care system would better address the HIV and AIDS epidemic at the time.

Fine adds that during the 1970s Chicano movement, activists were concerned about Latina women being sterilized at the hospital at an unprecedented rate and without their consent.

A presence in pop culture

With its iconic exterior features, the hospital has appeared in TV shows and movies such as General Hospital, The Interns, City of Angels, and Dr. Kildare.

Marilyn Monroe was also born in the charity ward of the hospital. And in 1954, jazz saxophonist Stan Getz was processed in the jail ward on the 13th floor, while his wife gave birth to their third child one floor below.

From busy to abandoned

In the hospital's heyday, it was one of the busiest public hospitals in the western United States, with 1,726 beds. It was the site of significant scientific contributions in clinical medicine and surgery. As a Level I trauma center, about one of every four major trauma patients in Los Angeles County was treated there. Its ER was one of the best in the country.

In 1994, the Northridge earthquake damaged the hospital and its surrounding buildings. Concerns about building safety codes were questioned. After a few months, the California Hospital Seismic Safety Law was enacted, which made both buildings out of compliance with safety codes. This prompted Los Angeles County to build a newer, safer facility down the street as a replacement. 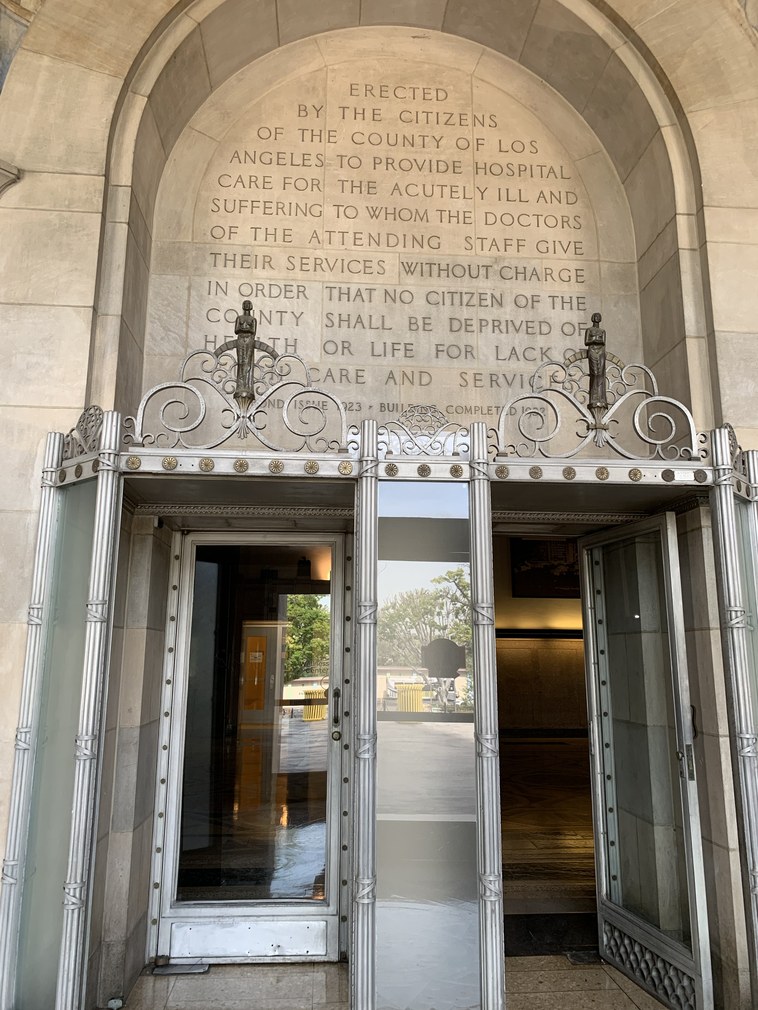 The mission of the hospital displayed on the wall of the entrance to the lobby by the Los Angeles County in 1933. Photo by Laura Kondourajian/KCRW

However, today the hospital is largely unused.

Since November 2017, the LA County Board of Supervisors has been planning to reuse almost 9,000 county-owned properties to ease the housing and homelessness crisis. That includes using the hospital as housing for “high-need populations,” including homeless Angelenos and low-income tenants. That’s part of LA County Supervisor Hilda L. Solis’ Restorative Care Village initiative.

On Tuesday, November 12th, following several years of community meetings led by the Health Innovation Community Partnership and actions taken by Supervisor Solis, the Board of Supervisors approved $68.4 million for Phase 1 of the Restorative Care Village, which will include an Acute Care Hub with 160 beds of bridge housing. 96 recuperative care beds and 64 crisis residential care beds comprise the total.

LA’s most recent homeless count found some 58,936 people living on the streets in LA County.  That’s despite the fact that two years ago, residents passed Measure H to tax themselves to help build more housing. 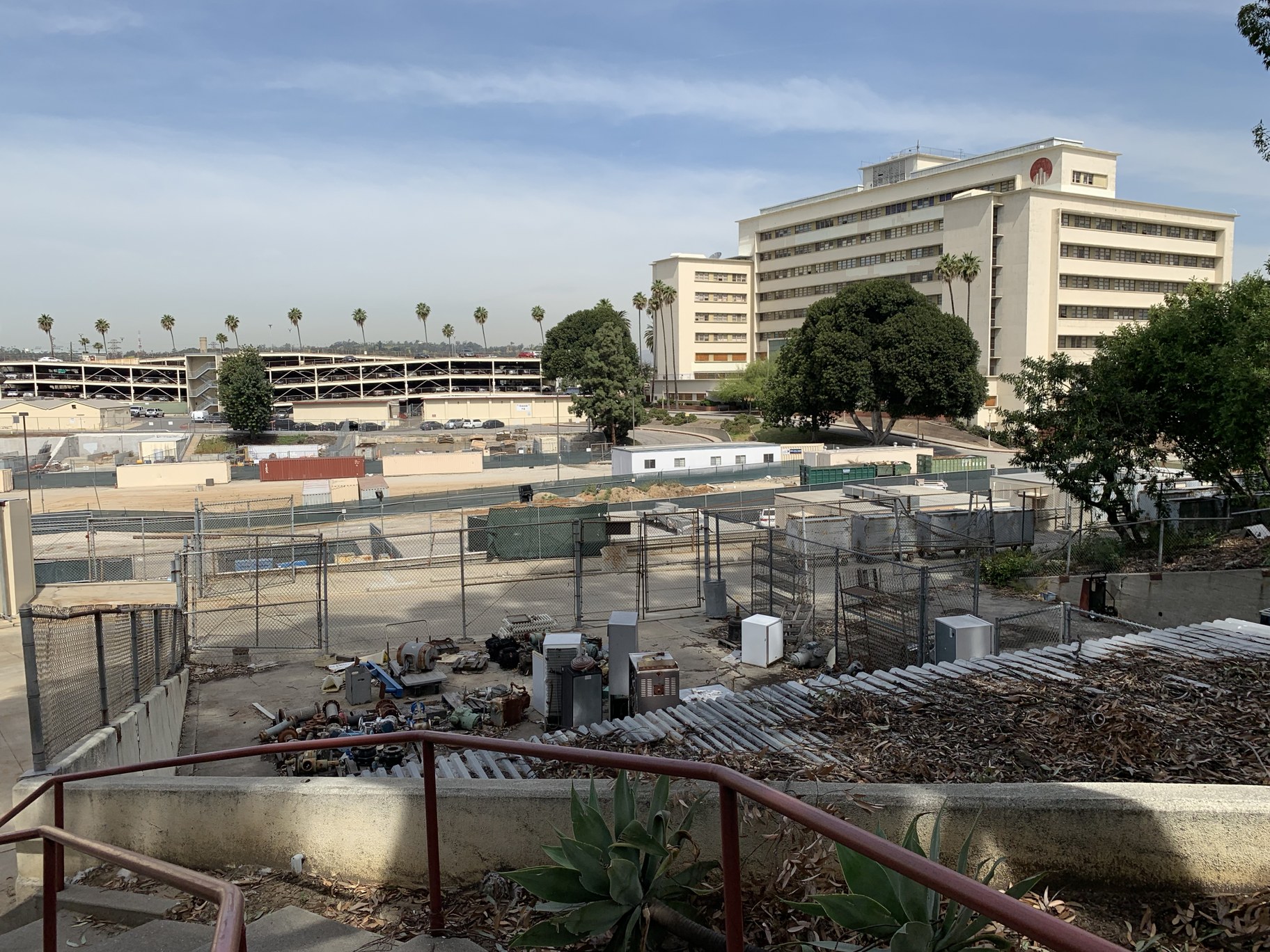 The Old Women’s Hospital and surrounding area to be demolished to make way for the Restorative Care Village. Photo by Laura Kondourajian/KCRW 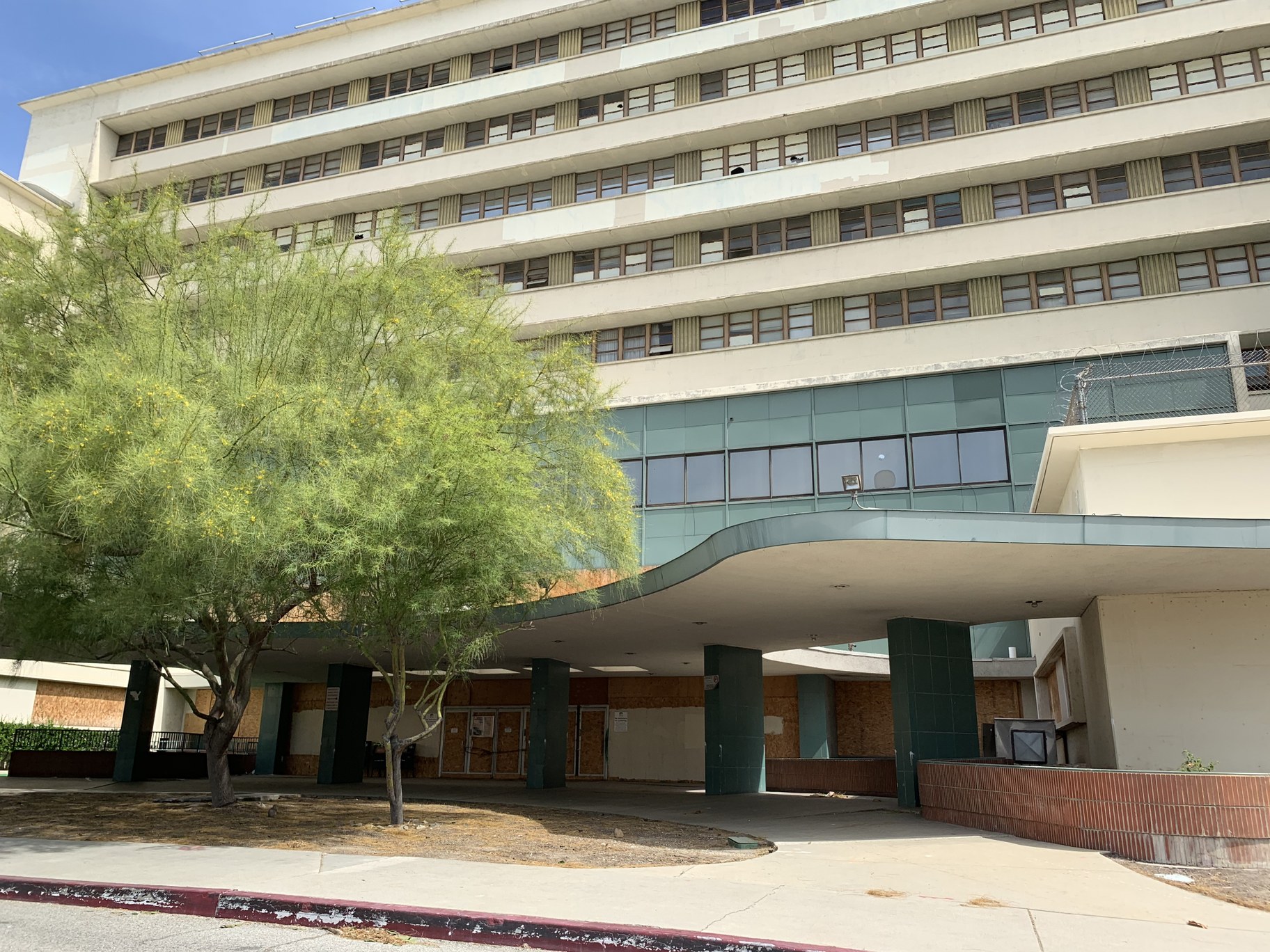 The shuttered front entrance of the abandoned Old Women’s Hospital on the West Campus. Photo by Laura Kondourajian/KCRW

Renovating the old hospital comes with difficulties. The hospital’s exterior will need extensive repairs. Its walls and foundation will need strengthening. Its roof and windows will need repairs. Hazardous materials will need to be removed. The electricity and plumbing systems will need to be replaced. And there’s no central A/C or working elevators right now.

Who will pay for this project?

It’ll have to come from multiple sources, including the federal government, state and local municipalities, health corporations, and housing and business sectors.

Supervisor Solis and her team have led several community meetings to get input from residents. So far, Angelenos say their most important concerns include parking and transportation (including better ADA access), senior care, supportive and homeless housing, gentrification, displacement, and mental health services.