If you were going to a protest who might you turn to for inspiration for your poster?

Perhaps Emory Douglas. He is the Bay Area-based artist and graphic designer who edited the Black Panther Party’s newspaper and poster art, and captured the passion of a radical movement for social change.

Now there’s an exhibition at LACE gallery in Hollywood where you can see a mix of Emory Douglas׳ early visuals for the Panthers, his new “remixed” imagery and protest art by others he inspired or who have worked with him -- such as a collaboration he did with the Zapatistas.

DnA spoke with the artist and co-curators Essence Harden and Daniela Lieja Quintanar.

“The iconography he made from his work in the 1960s and 70s is so vast and bold and wild and… it's the first work I ever saw that looks like that and the use and the spread of art for revolutionary practices is something that I think continues to be just deeply inspiring,” Harden said.

Quintanar pointed to one of the “remix” pieces in the exhibition.

“The image is from 1967, and also is related with the Cuban revolution, but also I think it connects with different revolutions around the world,” she said.

Emory Douglas selected a piece from 1969 that shows three men holding guns, wearing berets, and staring directly at the viewer. Above them is the inscription “Revolution In Our Lifetime.” The man in the center has a button on his shirt that looks like a little black girl holding a white doll.

One of Douglas’ trademarks is the thick black lines of his figures.

“I like woodcuts but it took so long to [make them, so] I started playing with photographs and shadows and playing with markers and pens to get that old woodcut look,” Douglas explained.

Douglas began his career as a graphic designer and artist at City College of San Francisco, where he studied commercial art. He was already involved with the Black Arts Movement when he met the founders of the Black Panthers, Huey Newton and Bobby Seale, at a meeting in Oakland in 1967.

“The first issue of the [Black Panther Party newspaper] was a legal size sheet of paper done on a typewriter and markers, which Bobby Seale had done. And I just happened to come to a location where they were coming over to connect with Eldridge Cleaver, because they knew of him as a writer in prison, and they were trying to recruit him to write for the Black Panther newspaper. And I’d seen what they were doing on that first legal size sheet of paper and I told them I could help them improve the quality of that... they said, ‘you seem to be committed. You've been coming around and we want to start the paper and we want you to be the revolutionary artist.’ That was my initial title and the purpose would be to tell our story from our perspective,” Douglas explained.

So what advice does Douglas have for protest movements today, like Black Lives Matter?

“As a graphic designer you will be challenged about what you say and how you say it. You have to be in tune with the community itself. You have to be informed and enlightened and in that way you definitely get your message out to a more broader audience,” he said. 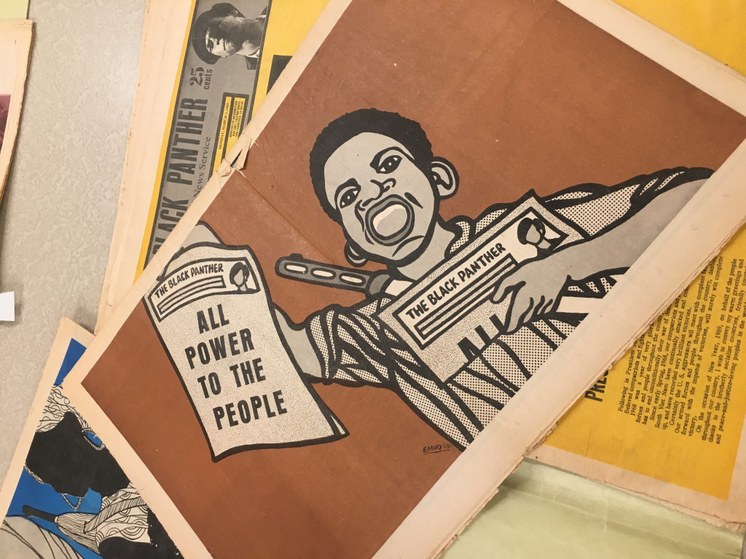 Houses and housing take many forms in LA, and that includes living on boats in the Southland’s marinas. So what’s it like to live on a yacht or sailboat? Is it affordable...

If you were going to a protest who might you turn to for inspiration for your poster? Perhaps Emory Douglas.

Late summer is the season for tomato sauce. Evan Kleiman shows you how to make it Press Play with Madeleine Brand

How Today’s Uprisings Compare to the 1960s Rebellions Scheer Intelligence

Joe Mathews: Are we supposed to visit grandma, or not? Zócalo's Connecting California