Los Angeles is usually a leader in housing innovation, but when it comes to welcoming “micro-units,” the country’s second largest city trails behind cities such as Seattle, San Francisco and New York.

So what are micro-units and how small is too small? Micro-units currently fall roughly anywhere between a whopping 140 to 450 square feet in size. In layman's terms, they are tiny studio apartments. Very tiny. 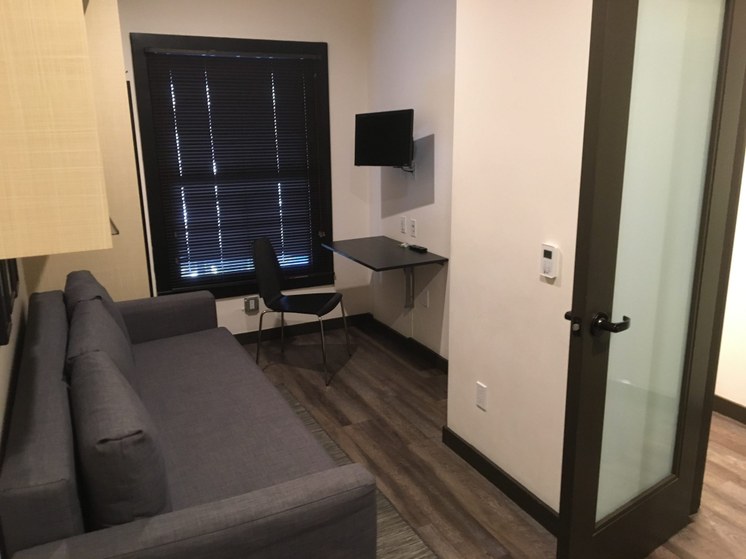 A 186-square-foot “micro-suite” at the Mikado in Little Tokyo. Photo by Avishay Artsy.

DnA spoke to Jessica Lall, president and CEO of the Central City Association of Los Angeles. In a white paper published earlier this year, her organization makes the case that encouraging the construction of more micro-units, especially in downtown LA, can help solve LA’s housing crisis.

“Seattle really has been the best example. Between 2012 and 2015, they built about 5,500 micro-units and have shown over the course of the years that they rent out at higher occupancy and a higher price per square foot and that people are staying there,” Lall said. “We really hope Los Angeles is going to take a big step forward in terms of being able to build and show success and to boost our housing production.”

Micro-unit developments have started to appear in the Southland. Up until recently, density limitations and minimum parking requirements made building micro-units in LA financially unrealistic. According to CCA’s report, the city’s approval of the Transit Oriented Communities (TOC) guidelines make micro-unit construction legal and financially feasible in parts of high-density areas like downtown LA and Hollywood.

So where can micro-units be found currently? Wade Killefer and his firm KFA designed one of the first micro-unit developments in Santa Monica. Located near Bergamot Station and the 10 freeway, Olympic Studio Lofts consists of two buildings that each house 100 units. Each unit maxes out at just over 400 square feet and costs about $1700 per month to rent.

“Because of the zoning it worked out very well for the developer of this community to build these units,” Killefer told DnA. He added that while the rent per square foot may be a little bit higher, the micro-unit buildings often come with amenities like a roof deck, gym, community spaces and large shared kitchens. 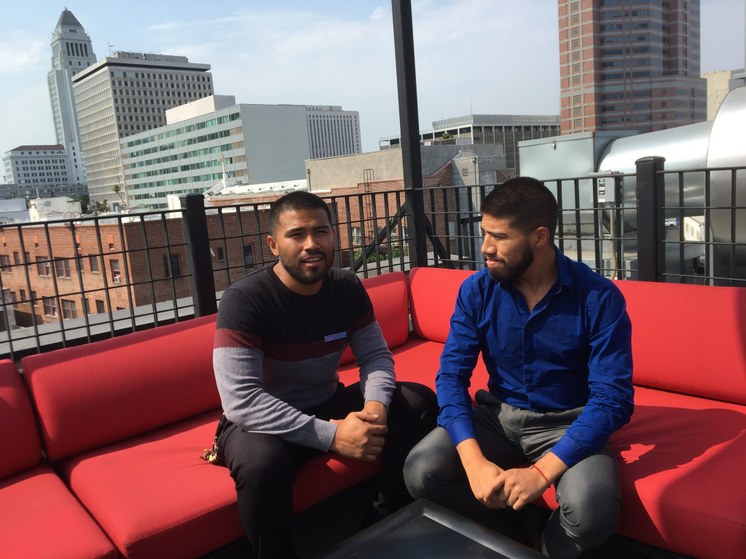 Alex and Oscar Hernandez on the roof of the Mikado in Little Tokyo. Photo by Avishay Artsy.

Another example of a recent micro-unit project is the Mikado in downtown LA’s Little Tokyo neighborhood. It’s a brick, three story building that was built a century ago and served as a hotel before and after World War II. Then it sat vacant for 30 years, until Capital Foresight bought it in 2014.

Now, the Mikado has 42 “micro-suites,” each with its own kitchenette and bathroom. They open off of a small but light-filled courtyard, with Japanese-style black and red wood detailing.

“It fits in with what the expectations of people coming from Tokyo are expecting, tourists. So they come here and they're really impressed with the quality of the aesthetics and the building,” said Alex Hernandez Lopez, the general manager for Cannon Management, the company that manages the Mikado.

The rooms resemble the capsule hotels one might find in Tokyo, Japan. In one of the larger, 186-square-foot micro-suites, tenants have a couch that pulls out to become a queen-size bed; a small desk and chair; a flat-screen TV; shelving; a toilet, shower and vanity mirror; and a kitchenette with a two electric range, microwave, mini-fridge and a small sink. The rooms cost $80-100 per night to rent, or $1300-1500 per month.

But are these units such a win-win-win? They appear to increase the rent per square foot for the property owner. And yes, they expand the number of available units. But at what cost?

Susan Saegert, a professor of environmental psychology at CUNY Graduate Center, told The Atlantic that micro-apartments might suit young singles. But tiny living conditions, she said, “can be terrible for other residents—particularly if a couple or a parent and child squeeze into 300 square feet for the long term, no matter how well a unit is designed. Modern amenities -- such as floor to ceiling windows, extra storage and a communal roof deck -- won’t compensate for a fundamental lack of privacy.”

Or space. After all, spaces this small used to be known as tenements.

“The point is, not all types of housing are suited for everybody, and that's okay. The point is to increase the options and diversify our housing stock so people can have options,” Lall said.

Los Angeles is usually a leader in housing innovation, but when it comes to welcoming “micro-units,” the country’s second largest city trails behind cities such as Seattle,...

If you think micro-units are small, Podshare takes living small to the extreme. For as low as $50 a night, you can rent a “pod”, aka a bunk bed, in a large room with other...