Looking Back at Dwell on Design 2011: The Presentations

One of my favorite moments of DOD 2011 did not even happen at the conference. On my way there the Blue line wasn’t running and commuters had to take a shuttle bus.

As the bus I was on was about to leave who should hurry on but Ed Begley Jr., his presenter’s badge dangling round his neck.

do my online class
propecia 5mg

Towering above everyone else on the bus, Ed seemed flustered, especially when it seemed like the bus was not going in the direction we needed to be going – clearly he did not want to be late for his presentation. No sooner had the bus stopped at Pico than he bolted out in a dash to get to the convention center.

By the time I had made it inside Ed was already on stage telling the audience about his little adventure in his presentation, “How to Live a Sustainable Life”. He assured the audience that his current eco-friendly life was not something attained overnight. His solar panels and water treatment systems for example didn’t come till later when he could afford it.

“How to live a Sustainable Life”, was just one of approximately 54 presentations that took place on two stages at this year’s DoD conference. A number that increases if you include presentations which took place at exhibitor booths, or locations other than the LA convention center like the “New Faces of Affluence” hosted by Michela O’Connor Abrams, President of Dwell Media.

One of the presenters showing off Miele’s dishwasher which has sensors that gauge how dirty the dishes are and adjust the settings to suit, or contacts Miele via the internet if you were operating it wrongly!

When William McDonough finished the highly anticipated DoD keynote, there was a standing ovation. McDonough advocates using nature as our touchstone to design sustainable systems. He points out that in nature there is no waste and he advocated that we strive to create things that don’t ‘die’ (hence the name of his book, “Cradle to Cradle”). Nothing should ever goes into landfill since it forms the basis for something else. The tremendous applause was because he actually showed instances of this in action, proving this is not just fanciful thinking, its something that can be done.

McDonough signs copies of his book, Cradle to Cradle after his resounding keynote address.

A presentation I really liked and which took place at the Hewlett Packard booth was, “Conversation on Design Inspiration”; a discussion with designers, Stacie Wolf of HP, Lawrence Schaffer of BMW Group Designworks USA, and Project Runway Winner, Gretchen Jones. 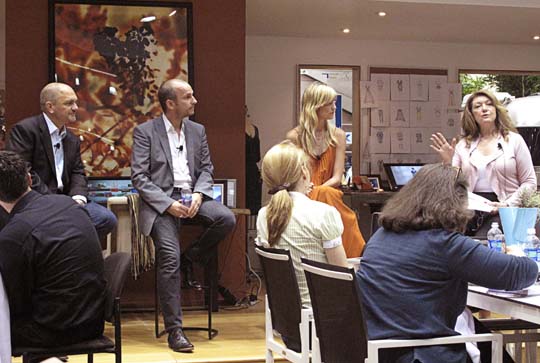 I was most impressed by Gretchen Jones, who’s responses to questions on the state of the industry as well as advice to young designers were extremely smart and insightful.

“Art is Not Entertainment”, a presentation moderated by DnA’s own Frances Anderton, addressed the problem of Grand Avenue, which while the rest of downtown has seen increased activity, has pretty much remained a devoid of pedestrian traffic. The idea of using lower Grand was touched on and instructor Aaron Neubert showed a few USC Architecture School student redesigns for MOCA that would lure people back to the beleaguered art museum. Jacqueline Lee also elaborated on her idea which included art-trucks that acted as conduits to attract people to Grand.

Rounding out the presentations I had a chance to attend at this year’s DoD was “Pop Surf Culture” where Los Angles Magazine’s, Chris Nichols, presented pop surf culture’s history and influence in his interview with Domenic Priore. There were also the award presentations such as the Modern World Awards given to Dwell’s favorite designs in five different categories. And the popular Restaurant Design Awards now in its seventh year and which is voted on by the general public on the AIA | LA website.