Can Gita, the cargo-carrying robot, make you walk more? 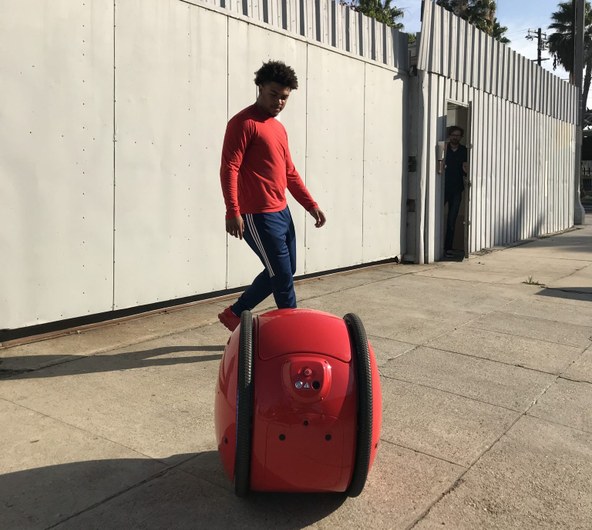 A prototype of Gita and Jeremy, a resident of the Crenshaw district of Los Angles
Photo by Frances Anderton

Would you walk with your belongings in a ball rolling along behind you? Maybe, if it looks like Gita.

Gita is a kind of robotic suitcase on wheels. It’s being prototyped by Piaggio Fast Forward, a subdivision of Piaggio, the Italian company that dates back to 1884 -- and brought us the Vespa scooter.

Piaggio Fast Forward was founded to focus on fresh ideas for lightweight mobility. And its first big idea is an autonomous container on wheels that follows its owner.

The concept is to get people walking to the store or the farmers market instead of making these kinds of short trips in a car.

"We don't want to have a world like WALL-E where everybody's fat and lethargic and everything just comes to them the minute they think about it," says PFF chief creative officer Greg Lynn. "We would much rather have a city that's smart and intelligent with autonomy like this but that really puts people and their experience and lifestyle in the center of it."

Gita will be featured among other alternatives to the private automobile, on show this weekend at the LA CoMotion Mobility Festival taking place in downtown’s Arts District.

Also on display will be SWITCH!, a Gensler-designed prototype of climbable streetlight-come-benches that are part of LADOT's "playstreets" initiative; the Transdev autonomous shuttle, as well as electric scooters, cutting-edge bicycles and other innovations that might hit our streets in the near future.

Can Gita, the cargo-carrying robot, make you walk more?

A prototype of Gita and Jeremy, a resident of the Crenshaw district of Los Angles Photo by Frances Anderton Would you walk with your belongings in a ball rolling along...