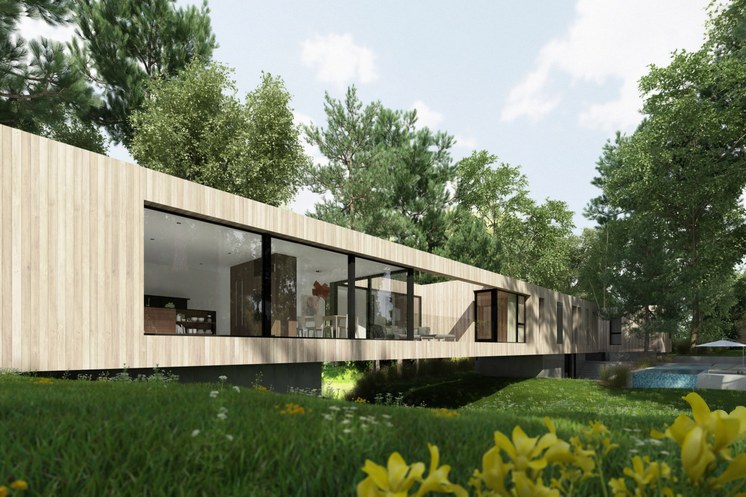 A rendering of The Bridge House, designed by Dan Brunn Architecture.

In our series “This is Home in LA” we’ve looked at many models of residential architecture. What about the architect-designed, Modernist-inspired home? Has it become LA’s leading high-end house style, and can you still find wild experimentation in design for living?

For answers, we turned to authors, architects and aficionados of Modernism, starting with Dominic Bradbury, author of The Iconic House.

Bradbury selected houses built from 1900 to 2012. They span the globe, but about 1 in 10 of his choices are in LA and Palm Springs, and all were built in the 20th century. 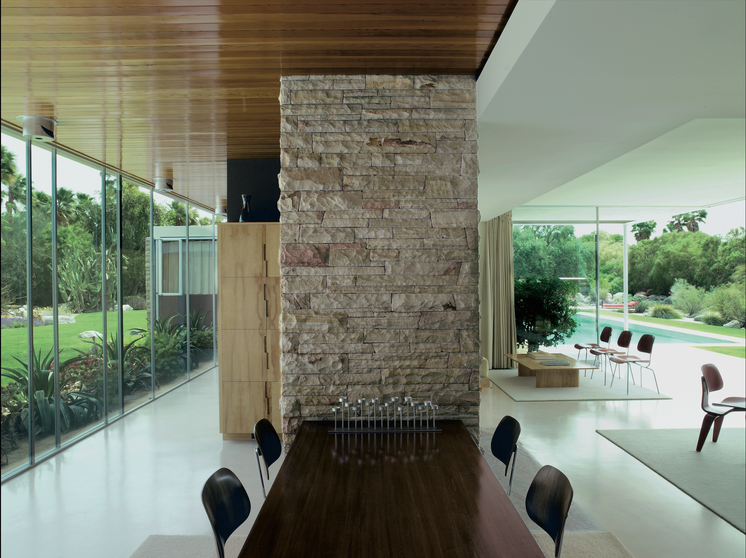 “One thinks of the mid-century period as this golden age in Californian design and desert modernism,” Bradbury said. “Our definition of iconic has to do with houses that had an influence and an importance beyond their original purposes of residence. So they carried ideas, messages that influenced all of us one way or another down through the years.”

Bradbury’s personal preference is for the Modernist tendency in Southern California. And that is still highly influential today.

To find out just how, DnA visits Dan Brunn, an architect who is building a 210-foot-long and 20-foot-wide house shaped somewhat like a tube and utilizing an innovative construction system BONE Structure that saves on wasted materials. It spans a dry brook in South Hancock Park. He’s named it “The Bridge House.”

“So the idea with the house is in essence a place to share a story and a place for us to showcase and to let people see what I believe a house of the future can be,’ Brunn said. 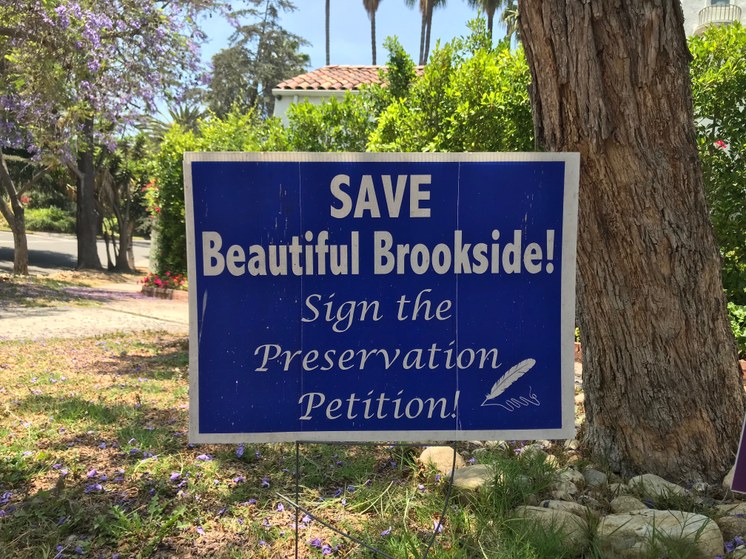 A sign posted a few doors down from the site of Dan Brunn’s Bridge House. Photo by Frances Anderton.

Brunn himself lives opposite his new home, in a house he calls “American 1950s residential traditional.”

The Bridge house is not small  -- 4500 square feet -- but Brunn has turned the tube at right angles to the street, and given over a lot of the site to landscaping, so it does not appear bulky. Rather, it’s intended to look as if it floats in nature.

But, in the front yard of a house a few doors down is a sign that reads “Save Beautiful Brookside.”

Owen Smith, a Brookside resident who also serves as president of the Greater Wilshire Neighborhood Council, told DnA that, had the HPOZ passed, a house like Brunn’s might not have been approved, because its design, while “a thoughtful use of the site,” is a “drastic departure from the existing character of the neighborhood.”

Brunn, however, plans to show off his home when it’s complete.

And that is because he has done what many designers have done over the decades: build a house as calling card.

He’s offsetting some of the costs of his construction -- $4 million, or around 900 dollars a square foot -- by doing trades with subcontractors and vendors.

And he even has a media partner, Dwell magazine. He sees this house as a continuation of the Case Study housing program. 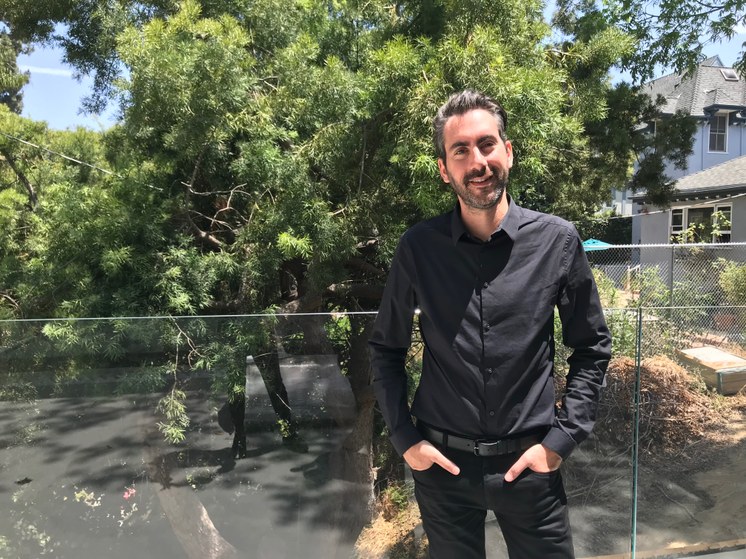 Dan Brunn, architect of The Bridge House, at his construction site in Brookside. Photo by Frances Anderton.

“Maybe this will spearhead others -- developers, architects, homeowners -- to be a part of this and to say, ‘you know what, let's rethink how we do things,’” he said. “I encourage others to try and push the envelope forward instead of just saying OK well this is how we have to build in Los Angeles.”

Dan Brunn’s Bridge House is expected to be ready early next year.

Now Brunn’s house may be radical for its South Hancock Park neighborhood.

But does LA’s Modernist past offer radical-enough solutions to today’s living needs?

“There's an expectation of what a modernist house looks like now,” said architect Michael Maltzan. He came to LA in the late 1980s to work for architect Frank Gehry and went on to start his own firm, and started by building private houses.

Publications like Dwell, Wallpaper, design websites, and the tastemakers that make over homes for AirBnB have long promoted a Modernist aesthetic: lots of glass, white stucco, cedar cladding, minimalist interiors.

Maltzan wonders, could that have had an unintended consequence: homogenization, and a loss of inventiveness when it comes to solving new problems?

“While the general level of design I would say is quite good, the breadth of experimentation has largely been lost. And that's coming at a moment when how we live is under extreme pressure in a city like Los Angeles, because of a whole set of new factors being laid on top of housing. And this is the moment where I think there's room for a new round of extreme experimentation.” 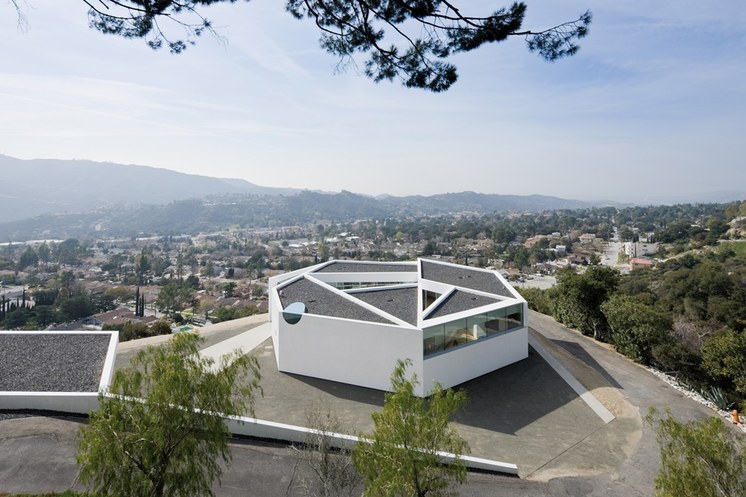 Maltzan kicked off his career with an inventive private house for the artists Lari Pittman and Roy Dowell: an opaque, white, seven-sided structure in a pinwheel around a raised central courtyard, alongside a 1950s house the couple owned, designed by Richard Neutra.

But he has turned to multifamily housing -- both affordable and market-rate -- to explore social relationships, space and form, exemplified in such projects as his housing for the Skid Row Housing Trust and One Santa Fe in the Arts District in DTLA.

Meanwhile George Smart, host of the US Modernist Radio podcast, says the problem is not one of too much popularity.

“Modernism has never really been that popular, to be honest, even in L.A. that embraced it more than anybody else in the single family homes,” he said.

“It's just like many other styles that we're used to seeing: Victorian, Georgian, etc. and that there's still room for experimentation in architecture all over the country. But in L.A. it is particularly hard because everything is just so darn expensive... not to mention there are certain requirements for permits and zoning and licenses and things like that that… make it a big barrier to doing some innovative work.” 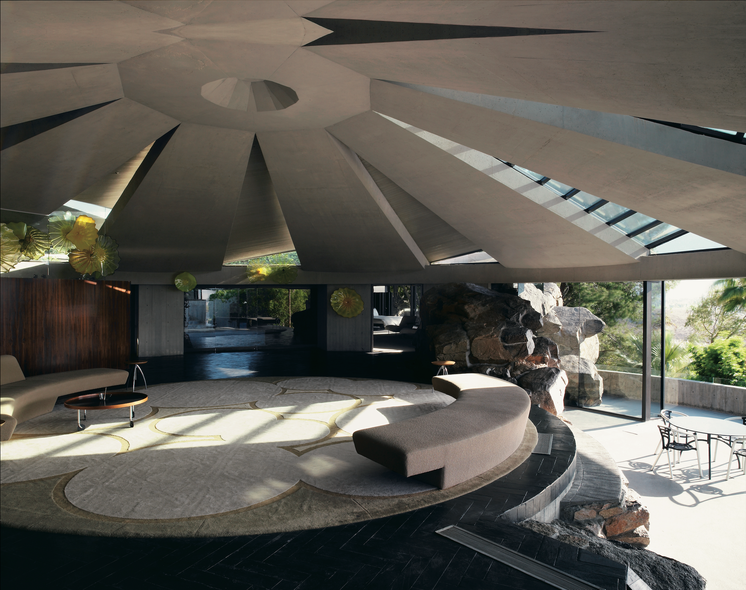 “He clearly said, ‘I don't want to build a house that looks like everything else in LA. I don't want to build an orthogonal house. I want something that is very much a response to the site.’ So he built this curve and it's composed of different strata going from heavy and solid to transparent. And they look like they're embedded into the hillside. And he even calls the house The Slither,” she said.

Cohen was drawn from New York to LA by the region’s eclectic design. But she says that a number of factors are making it harder for designers to innovate.

“The costs are exorbitant, so that having an architect-designed home is truly a luxury that's available only to the privileged few,” she said. “They are investing the time and the money, and I don't think they want cookie-cutter. But I think they want an absolutely stunning statement.”

Hollywood Boulevard is famous for its historic movie theaters. There’s the Chinese Theatre, The Egyptian, and El Capitan.

A rendering of The Bridge House, designed by Dan Brunn Architecture.