A view of the Mark Taper Forum from the newly redesigned Music Center Plaza. Photo by Frances Anderton/KCRW

The Music Center opened to the public with great fanfare in 1964, creating a central gathering place for Los Angeles’ cultural elite.

But it was designed to be accessed by car, not by foot. Now a 20-month renovation has produced a pedestrian-oriented gathering place, updated for a new era.

“We absolutely prior to the renovation would have people standing on Grand Avenue saying, ‘where is the Music Center?’ And between the gentler stairs, the escalators, the canopies which are bright and inviting, and the huge banners that announce you are here, I think people are going to know they're at the Music Center now,” said Howard Sherman, chief operating officer of the Music Center. 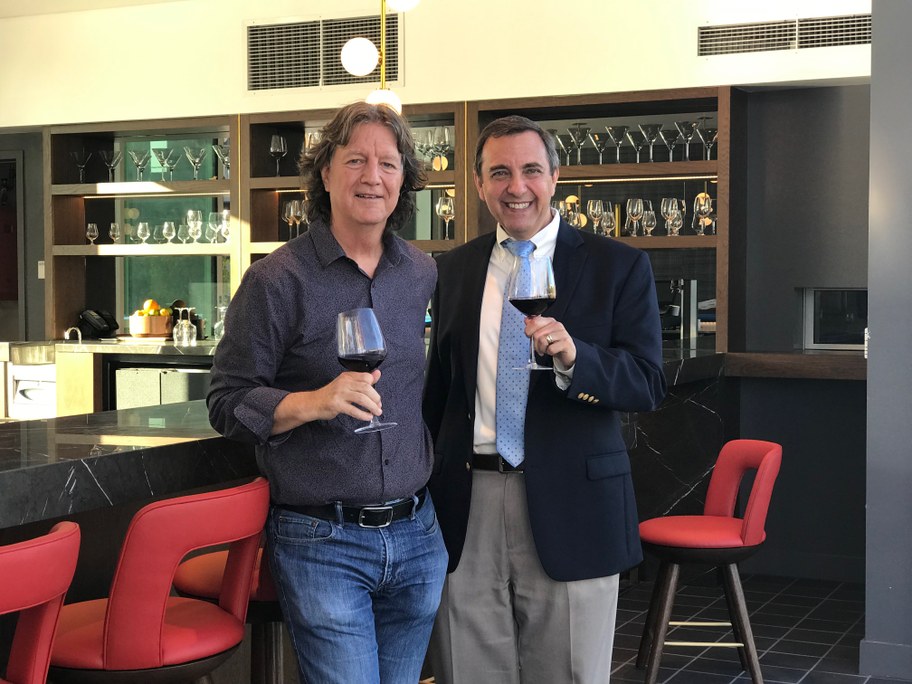 DnA met up at the site with Sherman and with Bob Hale of Rios Clementi Hale Studios, the architects who oversaw the plaza update, which cost around $41 million. His firm also designed Grand Park, across the street.

“We had to walk a line between preserving as best we could what was here but making it work better for the changing urban environment that we have here,” Hale said.

The architect of the plaza, Welton Becket, worked with landscape designers on a sunken plaza that would knit together the complex of lofty and much-admired cultural institutions, including the Dorothy Chandler Pavilion, the Ahmanson Theatre and the Mark Taper Forum. 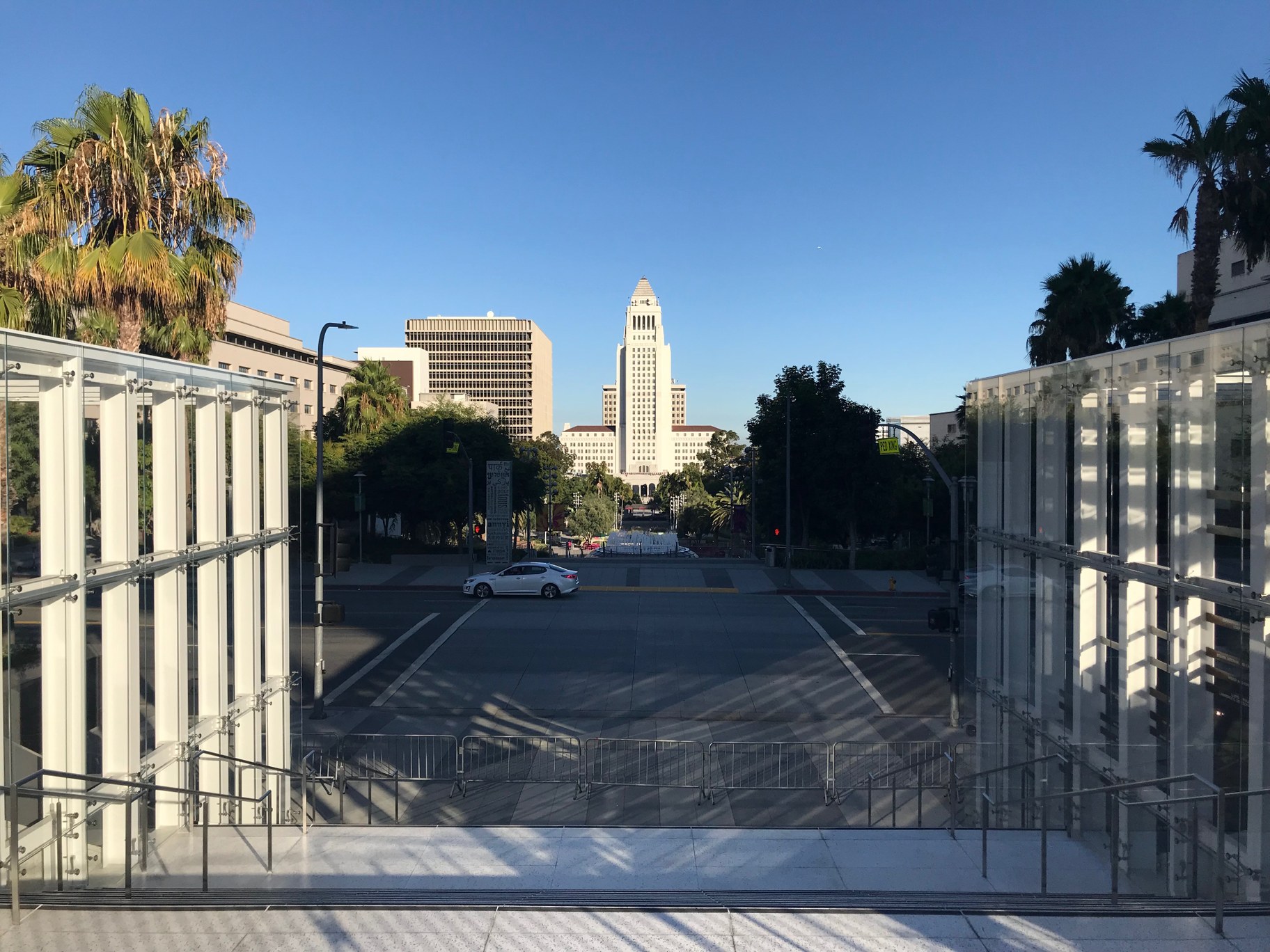 A new staircase and escalators help bring visitors from Grand Avenue into the plaza. Here’s a view from the plaza of Grand Park and Civic Center. Photo by Frances Anderton/KCRW

But this plaza, atop the steep Bunker Hill, was difficult to access and it languished for years, underused.

So tweaks have been made to draw people in. These include a staircase that now goes directly from Grand Avenue, flanked by escalators that are covered with a canopy. Bright banners announce your arrival at the Music Center.

“We've created a single level so the steps that were up and down sort of making it different disjointed spaces are gone. So now it's a big beautiful open space. We have relocated the [Jacques Lipchitz-designed sculpture “Peace on Earth”] that was in the middle of the plaza to actually the valet parking entrance, creating another huge open space. We've doubled the capacity, and then we've added five small buildings,” Sherman said. 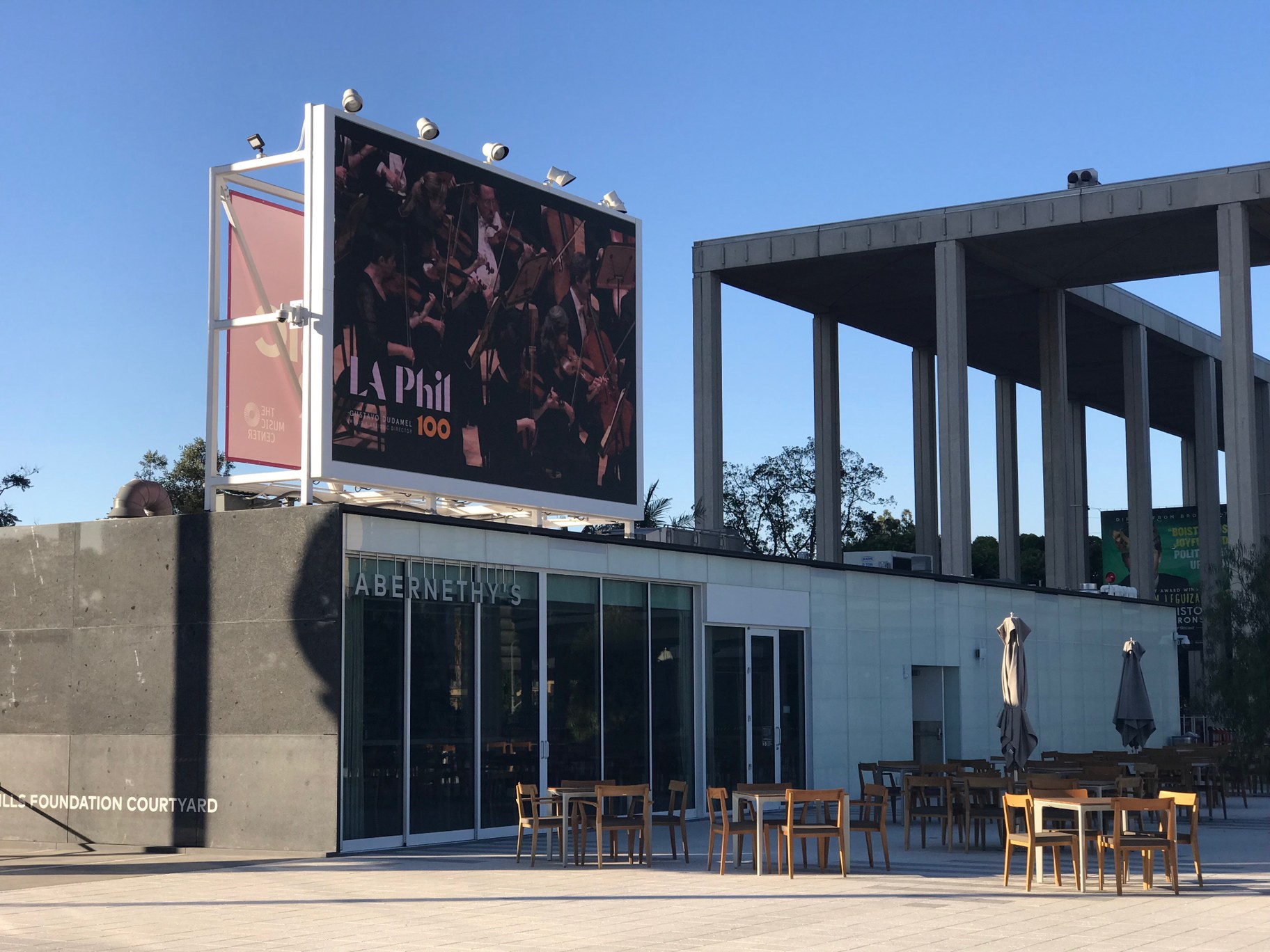 Abernethy’s is a new full-service restaurant that will feature an emerging chef program. Photo by Frances Anderton/KCRW

Those buildings include the Lisa Specht Welcome Center, permanent public restrooms, and three new dining options: an outpost of the local coffee bar Go Get 'Em Tiger, the Mullin Wine Bar, and a full-service restaurant, Abernathy's, that will feature an emerging chef program.

“There will be a new chef in this building every quarter featuring the diversity of L.A. County, both geographically and ethnically and all that L.A. has to offer from a food point of view,” said Music Center COO Howard Sherman.

On the plaza are LED screens featuring interactive art.

“How people experience art and want to experience art is radically different. There will always be a place for the classics, for opera, for symphony, for ballet. But people now want to engage in art and create art in ways Dorothy Chandler didn't imagine. And so what we've created here is an incredible space for people to engage in art in all new ways,” Sherman said.