Planning for this bridge goes back years -- it was funded through a 1992 lawsuit against Metro, as community mitigation for construction of the Metrolink rail yard at the downstream end of Taylor Yard.

“We are connecting two neighborhoods but these are two neighborhoods that at times had conflict, sort of a place where you might get into a little tussle but hopefully not. The idea is that you come to the middle of the bridge and there's two viewing platforms and there's a place hopefully to meet and have a nice quiet moment," Pali said.

The city of course doesn’t call it this - their name is not so charged: the Taylor Yard Bikeway and Pedestrian Bridge.

Pali kept it relatively simple and took inspiration from the industrial railroad bridges that did actually go over the river at one time -- though he describes this as being more streamlined and modern, and with a structure that is as efficient and light in use of materials as possible.

Since it was turned into a 51-mile concrete channel, the LA River has functioned as a wall, reinforcing the demarcation between communities made by the adjacent railroads, industry and freeways -- and dividing LA economically and culturally. 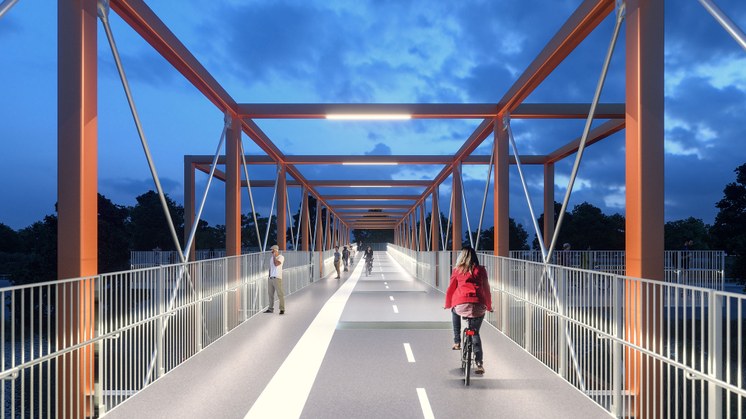 A rendering of the proposed pedestrian bridge over the Los Angeles River, connecting Elysian Valley and Taylor Yard. Image courtesy of SPF:architects.