Orange County Museum of Art gets a Morphosis-designed home The project has been going on for over a decade. But now it seems like Orange County is finally getting a permanent home for its art museum.

This is the third iteration of the design since he started working with the museum.

And prior to that the museum had embarked on various expansion attempts including in the mid-’80s when they worked up a scheme with architect Renzo Piano, designer of BCAM and the new Academy Museum.

OCMA says they need a new space because right now no one can find them in their location at the edge of the Fashion Island mall, between a parking structure and rows of condominiums.

So this museum will be in Costa Mesa, on a vacant space between the 2006 undulating glass-veiled Renée and Henry Segerstrom Concert Hall, designed by architect Cesar Pelli, the 1986 Segerstrom Hall designed by Charles Lawrence, the Plaza and the street.

They will also almost double their space for their permanent collection of more than 3,000 works of art from the 20th and 21st centuries.

To make all this viable, they had to sell their existing building. The new building is budgeted at around $50 million.

Mayne is known for very dynamic, industrial buildings that are at the same time very sensual -- as in rich in surface and material. They are never wallflowers.

With this one, he’s determined, he says, to avoid building an “icon” to sit alongside the other icons at Segerstrom and instead he has made a building into something resembling a landform, with horizontal layers like ancient rock.

This wraps around a very large public plaza ending in a cascade of steps, all of which is oriented towards a Richard Serra corten (or weathering) steel artwork, called The Connector. It’s 66 feet high and Morphosis has scaled the building in such a way that it becomes the focal point.

“The gallery spaces are spaces that we service the art. And they have a neutrality, a simplicity. The architecture is within both a broad urban thinking, and then the foyer, the entry, the atrium, the cafe, bookstore, is where the energy is,” Mayne said.

Many museums of contemporary art own a Richard Serra sculpture but often his dramatic abstract works sit in a large room. Here, the Serra is the focal point of the design. And Mayne says the general public is a “material,” essential to the vitality of a scheme that he says is 70 percent public space.

Over the lengthy process of getting this new building, there have been criticisms about priorities and allocation of money and whether the museum can even afford it. Staffers were cut a couple years back as the museum focused on the planned move.

But if the building succeeds as the design team, museum board and its director anticipate, it will be a magnet for viewing art and many other activities that will benefit the museum.

Mayne was on a shortlist of architects considered to redesign LACMA in 2001, one of fivve near-missed opportunities to build an art museum, a highly desirable building type for many architects.

They offer the chance to experiment with pure architecture -- space and light and form -- and make a mark on contemporary culture.

The Orange County museum is growing, but the collection itself has also changed as the demographics of Orange County have changed.

OC is home to the third largest Asian American population in the United States. And the museum has changed their programming to reflect a more Pacific-based, as well as Latin America-based, exhibition program.

The museum will close this Sunday and will move to a temporary location in South Coast Plaza Village in Santa Ana.

Next spring it’ll break ground on a permanent home at the Segerstrom Center for the Arts in Costa Mesa. The opening is planned for 2021. 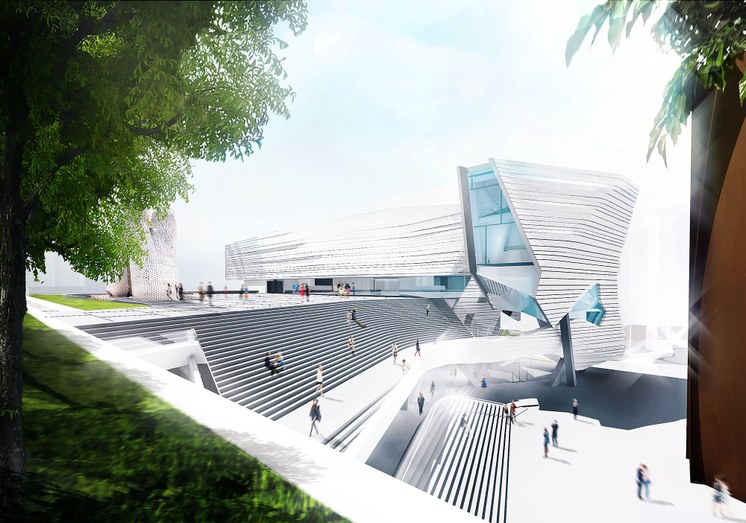