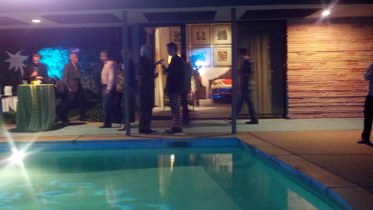 California's Modernist architecture might be L.A.'s most famous export and one of the movement's largest celebrations, Palm Springs Modernism Week, happens right here in our own backyard. For two weeks, hundreds of design enthusiasts descend upon the desert city for parties, panels, tours, a trade show, and lots of gawking at gorgeous homes. The event kicked off last weekend and one of those in attendance was Jason Groman, KCRW’s utility guy, composer of DnA’s theme tune, and an ardent preservationist—with the added pedigree of being the nephew of noted Modernist architect Donald Wexler.

After arriving in Palm Springs in his 1964 Chrysler Newport, his first stop was a party at the clean-lined home of Ol' Blue Eyes—Frank Sinatra's house, designed in 1947 by E. Stewart Williams. While there, he ran into Jacques Caussin, the man who has taken this show from a tiny event 12 years ago to the 11-day extravaganza it is today. The party is still raging: Frances will join Jason in Palm Springs this weekend, where she'll interview the musician Moby (a recent guest on this show) about his passion for Modernism; and Jason will talk to his uncle, Donald Wexler, in an interview we'll podcast later. 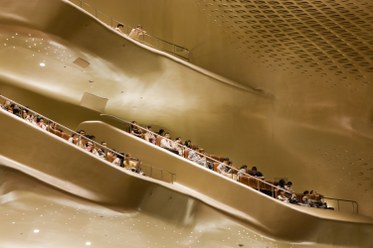 The romance with midcentury Modern architecture results, in part, from the way the buildings and their occupants were portrayed by photographers of the period, most famously Julius Shulman and his sleek, glamorous, effortlessly cool style. Now photography is telling a different story about buildings, says LA architect Barbara Bestor, who also happens to be executive director of the Julius Shulman Institute at Woodbury University. What makes these new photographers work different, says Bestor, is an interest in the messy context of buildings, as in the work of Iwan Baan, Richard Barnes and Catherine Opie. 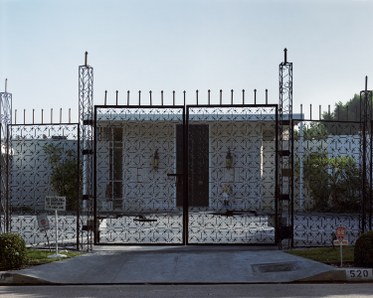 All three have work on show in LA this month: the work of Iwan Baan opens this Wednesday evening at Perry Rubenstein; Richard Barnes has a piece on display at LACMA; this Saturday, Regen Projects will open a show of Catherine Opie’s photographs and she is also exhibiting right now at Woodbury’s own WUHO gallery, on Hollywood Boulevard. To hear more about contemporary photographers of the built environment, catch a longer interview with Barbara Bestor here on the DnA web site.

The term "contemporary Chinese architecture" conjures up imagery of hyper-modern steel-and-glass showpieces like the CCTV building designed by Rem Koolhaas or the Bird’s...

California's Modernist architecture might be L.A.'s most famous export and one of the movement's largest celebrations, Palm Springs Modernism Week , happens right here in...