Lakewood, a "Paradise of the Ordinary"

DnA is currently exploring the theme of “This is Home in LA: From the Tent to the Gigamansion (and everything in between).”

The premise of the series is that in the boom years of the last century, Los Angeles developed homes that were specific to the region, its lifestyle and the economy.

“When I think about how the lifestyle product called California was marketed to the world, I have to start with the houses of Southern California,” says DJ Waldie, historian and author of “Holy Land: A Suburban Memoir.” 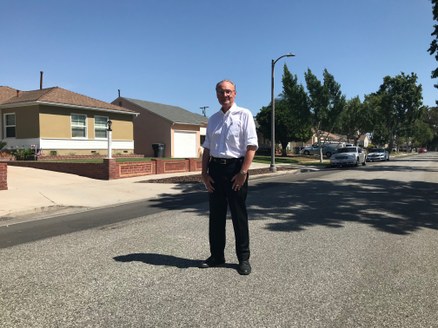 DJ Waldie stands in the middle of a typical street
in the City of Lakewood. Photo by Avishay Artsy

“These structures embodied before and after the Second World War much of what America thought was the good life. They were homes that were accommodating without being pretentious. They were open to novelty and experiment.”

The question is, are we realizing the same level of novelty, experiment and specificity to place today?

To find answers, so far we’ve looked at contemporary LA homes starting with the very smallest: tents, ADUs and boats.

Today we visit the longtime California ideal: the single family home, specifically the mass-produced tract houses of Lakewood that were built in the thousands in the early 1950s to house young couples who had experienced the Depression and World War II.

These represented a “paradise of the ordinary,” says Waldie, as he tours DnA around Lakewood’s residential streets, recalling the time when you might find as many as 80 children out roaming together, without parental guidance.

These streets of small, three bedroom houses on 5,000 square foot lots make up 94% of the city’s development. When they were built, a typical Lakewood house would sell for about $11,000, or around $108,000 in today’s dollars. Now the cost is nearer half a million dollars or more.

Despite their relative priciness, Lakewood is trying to preserve this lifestyle, even as neighboring cities like Long Beach and Los Angeles are looking to densify and expand mass transit.

One way planners and elected officials hope to achieve more affordable housing while enabling homeowners to pay their high mortgages is through permitting ADUs.

Todd Rogers, vice mayor of Lakewood, tells DnA he would resist ADUs if he could.

“What we're trying to do is is educate our legislators that there's a disconnect between the social engineering that's taking place at the state capitol and how real Californians feel.” He adds, “If you took a survey of most Californians they want someplace where they can go... in their backyard, play with their dog, and play with their kids and have their own little slice of heaven, if you will, and people describe Lakewood as that.”

Meanwhile in Los Angeles, architects and planners gathered at an AIA/LA conference last week to discuss the affordable housing challenge in the region.

Michael Lehrer, John Egan, Larry Scarpa and Angela Brooks share their thoughts on how to square yesterday’s dream with today’s reality in denser housing strategies that keep something of the flavor of Waldie’s “paradise of the ordinary.”

Paradise of the Ordinary, steel tariffs

Lakewood, a "Paradise of the Ordinary"

DnA is currently exploring the theme of “This is Home in LA: From the Tent to the Gigamansion (and everything in between).”

Building is booming in LA and that drives up the cost of materials. What happens when you add steel tariffs?