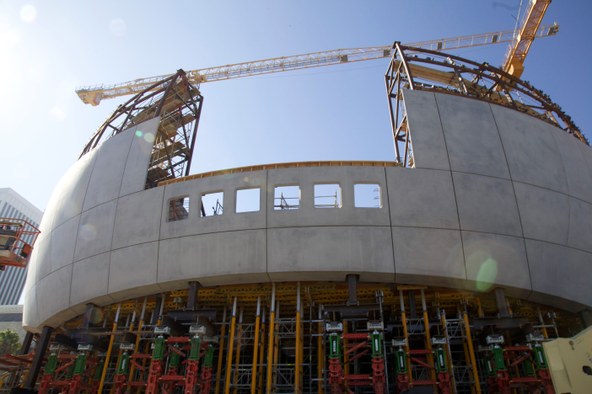 The Academy Museum under construction on September 27, 2017
Photo by Avishay Artsy

The Academy Museum of Motion Pictures was first dreamed of a century ago by silent film star Mary Pickford. Now the complex designed by architect Renzo Piano is under construction at the corner of Wilshire and Fairfax.

The museum connects the retrofitted 1939 Streamline Moderne May Company Building, now the Saban Building, by two bridges to a sphere will contain an auditorium and a rooftop gathering space with a spectacular view of the Hollywood Hills.

This project had spent some time in development hell, as it met with design, construction and fundraising challenges.

But now the project has been boosted by a $50 million check from Haim and Cheryl Saban and the construction team, now helmed by MATT Construction, is triumphing over difficulties in building the sphere.

DnA talks to Academy Museum director Kerry Brougher about making the architecture cinematic, and with Ann Gray, architect and publisher of Form magazine, about why she's thrilled with a structure she had feared was an "obnoxious iconic form."

She also talks about spheres, and why they are back in style. For example, Jacques Herzog of Swiss firm Herzog and deMeuron is proposing two for the planned Berggruen Institute.

Are people tired of a "jillion irregular radiuses and compound curves?"