The bell towers, situated at the front end of the cathedral, held the vaults of the nave in place. Photo credit: CC 2.0, via Pixabay

But if congregants and tourists deeply miss the iconic cathedral, architects are already dreaming up new versions of it.

Barely had the ashes cooled when the French government promised to rebuild by 2024 -- the year Paris hosts the Olympics -- and they announced an international design competition to redesign the damaged building..

It took French-born architecture professor Jean-Louis Cohen by surprise: “I was stunned because I found it extremely early in the process for damage was not yet assessed.” 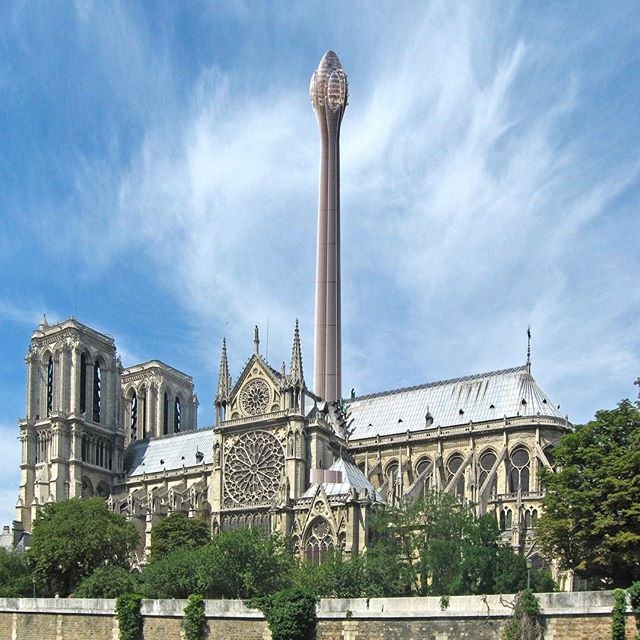 Describing the announcement as political in motive, “premature and rather demagogic,” Cohen explained that in addition to assessing the extent of the cathedral’s damage, there has to be serious consideration given to a building that is as much a product of the 19th century -- and Viollet le Duc’s “romantic Medieval” additions including the now-burned spire and the gargoyles -- as the 13th.

But architects are already licking their chops.

After all, the French state put the machine-like Pompidou Center in the old Les Halles; it put a glass pyramid at the heart of the august Louvre museum. Might the 850 year-old cathedral add a radical variant on Le Duc’s spire, or not replace it all? 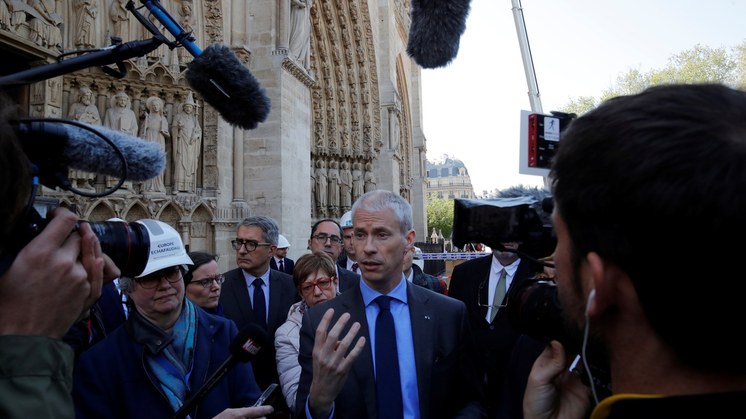 French Culture Minister Franck Riester talks to journalists in front of the Notre-Dame Cathedral about the securing of the large artworks after a massive fire devastated large parts of the gothic structure in Paris, France, April 19, 2019. Photo credit: Philippe Wojazer/Pool/Reuters

Cohen joins DnA, along with Christophe Lemoine, French Consul General in Los Angeles, and architect Olivier Touraine, for a conversation about what comes next for a building whose fire galvanized the world.

Says Cohen: “There are two Notre Dames. There is the physical building made out of stone, wood, glass, lead and brass. And there is also a building made of words, made of images, made of film stills, to which people relate much more than to the real one perhaps.”