The Bob Baker Marionette Theater is the oldest children’s theater in Los Angeles, and has been dazzling kids and adults with hand-made puppets since 1963. But the late founder and namesake of the company, Bob Baker, sold the building five years ago to a real estate developer.

The theater’s owners now say the theater will close its current location in less than two months. There will be a closing celebration on Nov. 23, the same date it opened 55 years ago, that will be free and open to the public.

The Bob Baker Marionette Theatre is housed in an unassuming large white cube, just a mile west of downtown at Glendale Boulevard and 1st Street. A large clown statue greets you as you enter the courtyard, green paint covers the ground, and painted daisies dot the landscape.

Bob Baker built a career as a puppeteer and animation consultant to Disney and other studios. On top of founding the theater, Baker’s marionettes graced the silver screen. His work can be seen in Judy Garland’s “A Star is Born,” Elvis Presley’s “G.I. Blues,” “Star Trek” and “Close Encounters of the Third Kind.” 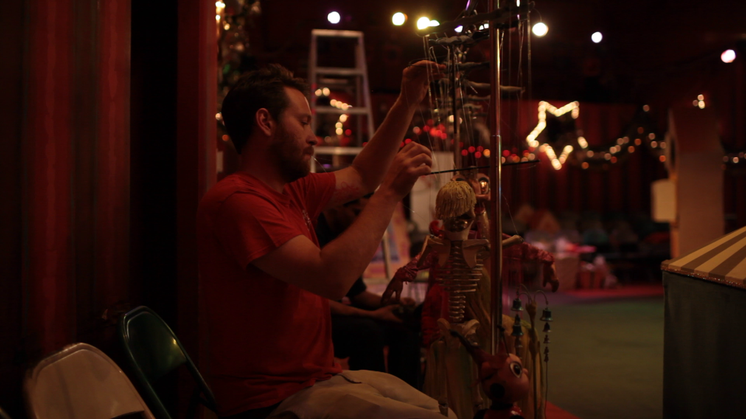 But the theater struggled financially. In a last-ditch effort to keep the theater afloat financially, Baker sold the property for $1.3 million to real estate developer named Eli Elimelech. While Baker was on hospice care, Elimelech announced plans to build 102 apartments in its place. Baker died near the end of 2014, at the age of 90.

Along with the apartments, Elimelech plans to build 2,700 square feet of commercial space — which he said would include the theater.

Under Elimelech’s proposal, the theater would shrink to about 40 percent of its current size. But their future plans include a museum and library, along with a theater space. And to realize this plan, they say, they need a bigger space, not squeeze into a smaller venue. The management at Bob Baker say Elimelech listened to their concerns, but wouldn’t promise them the space they needed. 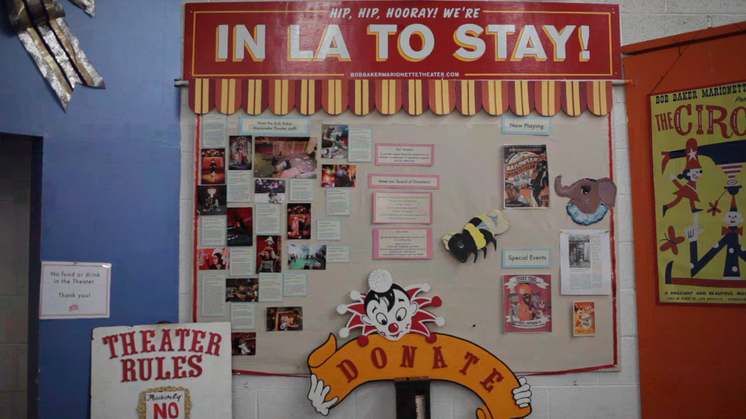 “In L.A. to Stay!” The rallying cry of the Bob Baker Marionette Theater as it looks for a new permanent venue. Photo credit: Derrick DeBlasis

Winona Bechtle, the theater’s Director of Development and Community Outreach, said leaving their current location may be the best solution.

“Throughout this whole process, the thing that was underscored most to us, is that, to really make it work, there’s not some magical entity that is going to come down from the sky and protect you. What it took for us to cement our future is for us to really get in gear, to figure out where we wanted to be and to work really hard to define what this theater is, which is the spirit of imagination in Los Angeles,” Bechtle said.

Alex Evans, the executive director and head puppeteer for the Bob Baker Marionette Theater, says that despite the theater’s troubles, he’s excited about its future.

“Things have never looked brighter. I’ve never had such wonderful people around and everyone from people in the city helping us, to Winona and non-profit people, to artist and technicians,” Evans said.

Even as the theater prepares to move to a new location, Elimelech has offered the theater to move back in if management chooses to. Nothing has been signed, so Bechtle and Evans are reluctant to say where they hope to go. What they do say is that they are actively searching for locations in northeast Los Angeles.

The puppet show will go on until Nov. 23 at the original Bob Baker Marionette Theater space. On Nov. 24, “Bob Baker’s Nutcracker” will open at the Pasadena Playhouse and run for five weeks. What happens to the theater space next is still to be determined.

This past Saturday, DnA and KCRW convened something called a “design jam,” a group brainstorming session. It was at IndieCade, the independent gaming convention, held this...

Buy a condo, gift a house

Can the TOMS Shoes model of buy a pair, gift one to a shoeless person, be applied to houses?

The Bob Baker Marionette Theater is the oldest children’s theater in Los Angeles, and has been dazzling kids and adults with hand-made puppets since 1963.