Every few weeks it seems like a new shared working space appears in LA. But there’s one that’s soon to open in Hollywood that just might win the prize for daring design, as well as offering up a twist on the private members club model: Second Home, designed by Spanish firm Selgascano.

DnA tours Second Home LA, while under construction, and finds out why the founders believe Second Home is “the anti-WeWork,” and in “the vanguard of sustainable building practices,” despite all that plastic.

We also visit the Serpentine Pavilion that Selgascano designed for London’s Kensington Gardens. It’s now coming to the La Brea Tar Pits for a six-month stay. Selgascano also brought their improvisational approach to Sam First, a jazz club near LAX.

Second Home was founded by Sam Aldenton and Rohan Silva in London in 2014. Silva, whose resume includes serving as a senior policy adviser to former British prime minister David Cameron (before the calamitous Brexit vote), met Aldenton, described by Silva as a "serial entrepreneur in the social impact kind of space," and they formulated their concept for a venue that would be a private club with a difference.

Second Home mixes private, rented work areas with public amenities; for profit companies with non profits; and it invites members of the general public to drop in without charge to use the company’s bookstore, auditorium and restaurant. 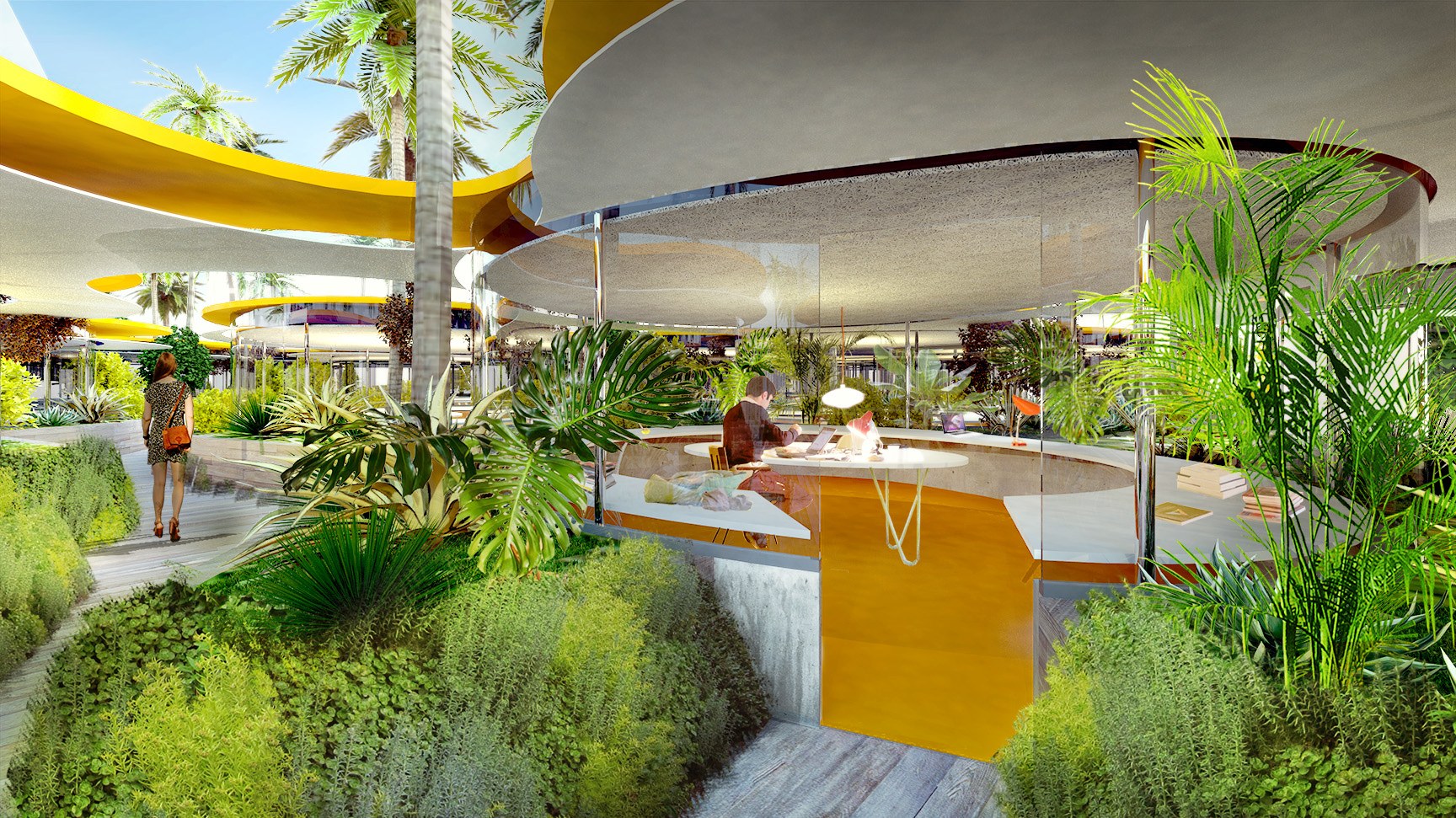 Second Home quickly spun into four locations in London as well as Lisbon, and now Los Angeles -- and its success is due in large part to the pizzazz of its architecture.

Nearly all the Second Home locations are design by Selgascano, a Madrid-based firm founded by Jose Selgas and Lucia Cano that has earned a following for environments that appeal to the child in every adult: lots of color, plastic and plants composed into designs that feel spontaneous and relaxed, yet highly sophisticated.

At the new East Hollywood Second Home location they have created a field of 60 acrylic studio-pods under yellow roofs, amidst thousands of plants, on the site of a former parking lot. This combines with a retrofitted Colonial Revival building by the architect Paul Williams, designed in 1961 as headquarters for the Assistance League of Southern California and formerly the Anne Banning Community House.

Selgascano maintains a 12-person studio in a tubular building in a forest that they call “The Office in the Woods.”

“Nature plays a huge role in their work. But everything is done in accordance with the human scale,” Aldenton said.

As for combining the yellow-topped office units at Second Home LA with a rehabbed Paul Revere Williams building, Silva says, “It might seem slightly odd with this bright optimistic future that we're bringing but it is those Greco-Roman columns alongside the bright yellow polycarbonate that create this fantastical environment.”

The firm will also add some 7,000 plants and trees to the site, a sharp contrast to the nearby freeway and corporate office towers of Hollywood.

“The worst thing, we think, for our cities are yet more identikit grey soulless buildings devoid of plants and trees and habitation,” Silva added.

Bringing the Serpentine Pavilion from London to LA

By way of “immersive love letter” to Los Angeles, Aldenton and Silva have partnered up with the Natural History Museum of LA County to bring an earlier Selgascano project -- their 2015 Serpentine Pavilion -- to LA. It will open this weekend at the La Brea Tar Pits. 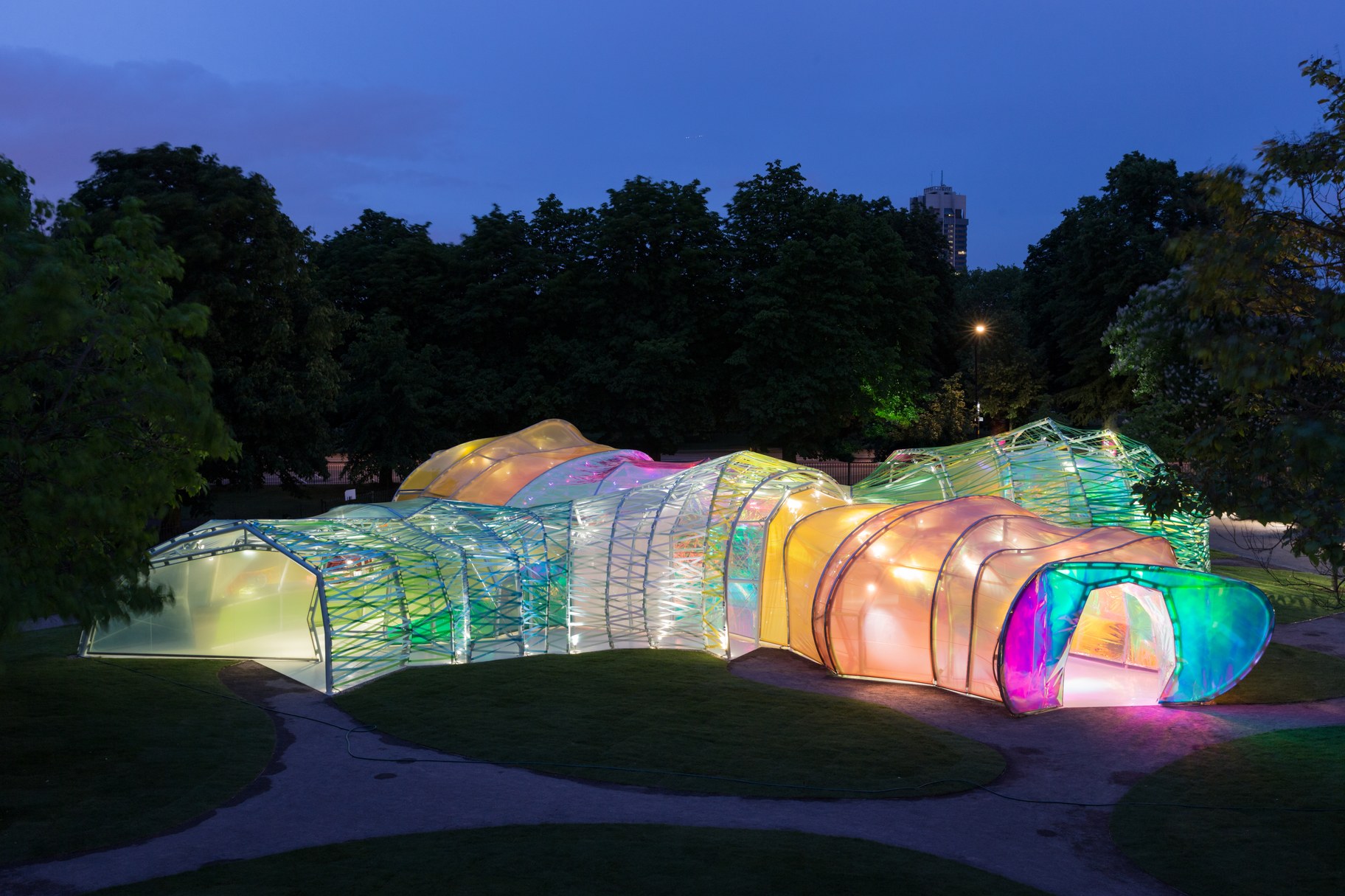 Second Home Serpentine Pavilion by SelgasCano as it originally appeared in Hyde Park in 2015. It will open on June 28, 2019 at the La Brea Tar Pits, where it will remain for six months. Photo by Iwan Baan, courtesy Second Home

2015 Selgascano won the prestigious annual commission to design a pop up pavilion for the Serpentine Gallery in London’s Hyde Park.

Their trippy, squiggly, structure made of colored, translucent, ribboned and mirrored plastic sheet was hit. Silva and Aldenton promise it will serve as a preview of Second Home.

“We're going to be hosting an amazing array of interdisciplinary programming, ranging from dance through to talks about the future of the city and screening films, and really it's our chance to showcase some of the things that we have fallen in love with about the city,” Silva said. 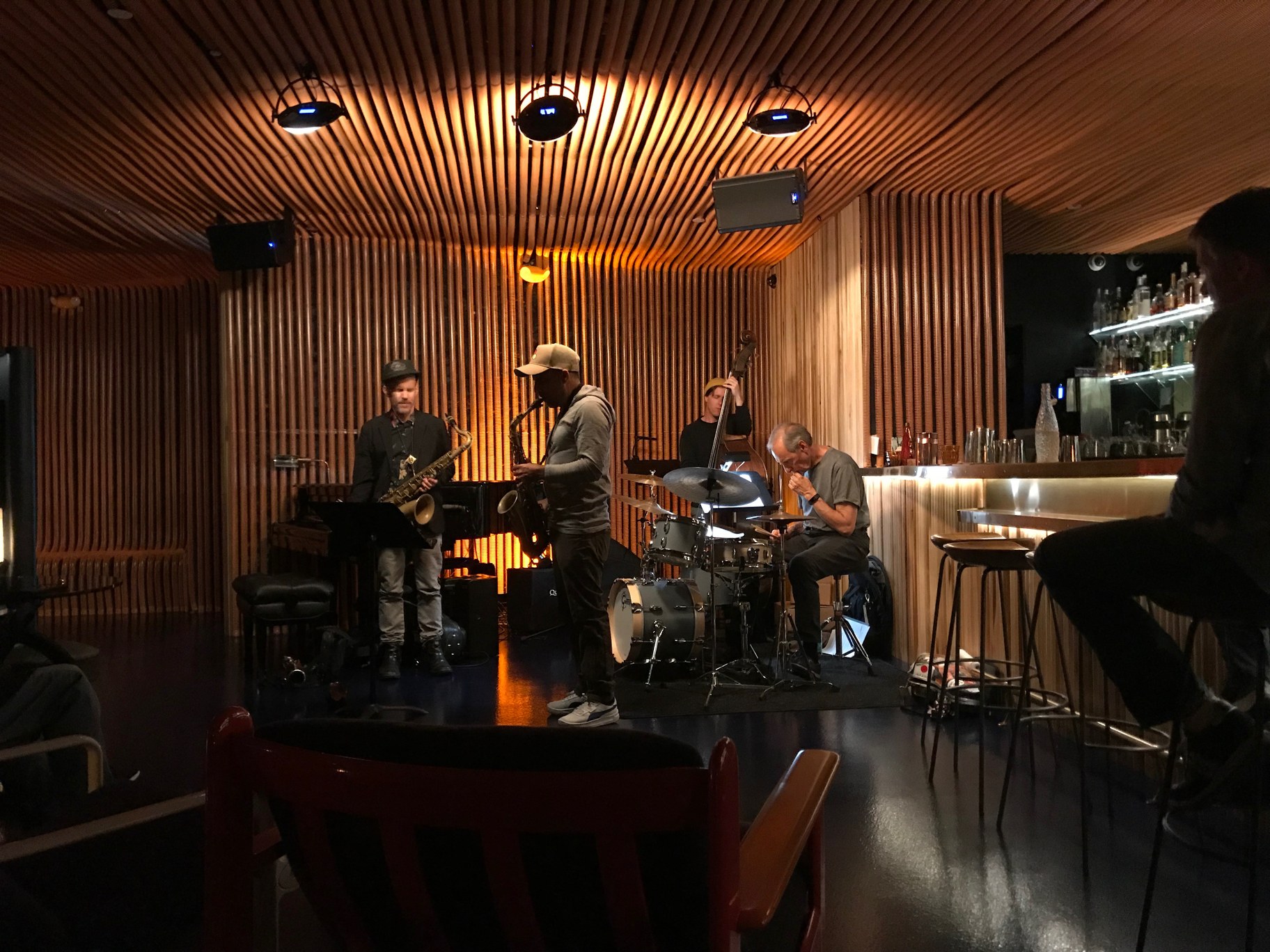 A jazz group performs at the LAX-adjacent Sam First, designed by Selgascano. Photo by Frances Anderton/KCRW

Second Home was not the first Angeleno client for Selgascano. They were tapped in 2017 by billionaire philanthropist Nicholas Berggruen to retrofit a midtown building to serve as a central office for the Berggruen Foundation. (That project that was subsequently shelved when Berggruen scaled back the project.)

And, after visiting Second Home in London, Paul Solomon commissioned the duo to design a jazz club called Sam First, which sits at the base of an anonymous tower amidst travelers' hotels just east of LAX.

Solomon, a developer of several buildings in the Arts District including the Toy Company and Biscuit Factory, named the bar after his grandfather, a Polish émigré and tailor. The logo of a needle and thread adorn the bar’s neon signs.

“The ceiling and the walls for the most part are made up of industrial food processing tubing that drape across the ceiling and down the walls with gaps to allow for appropriate acoustic performance,” Solomon said. 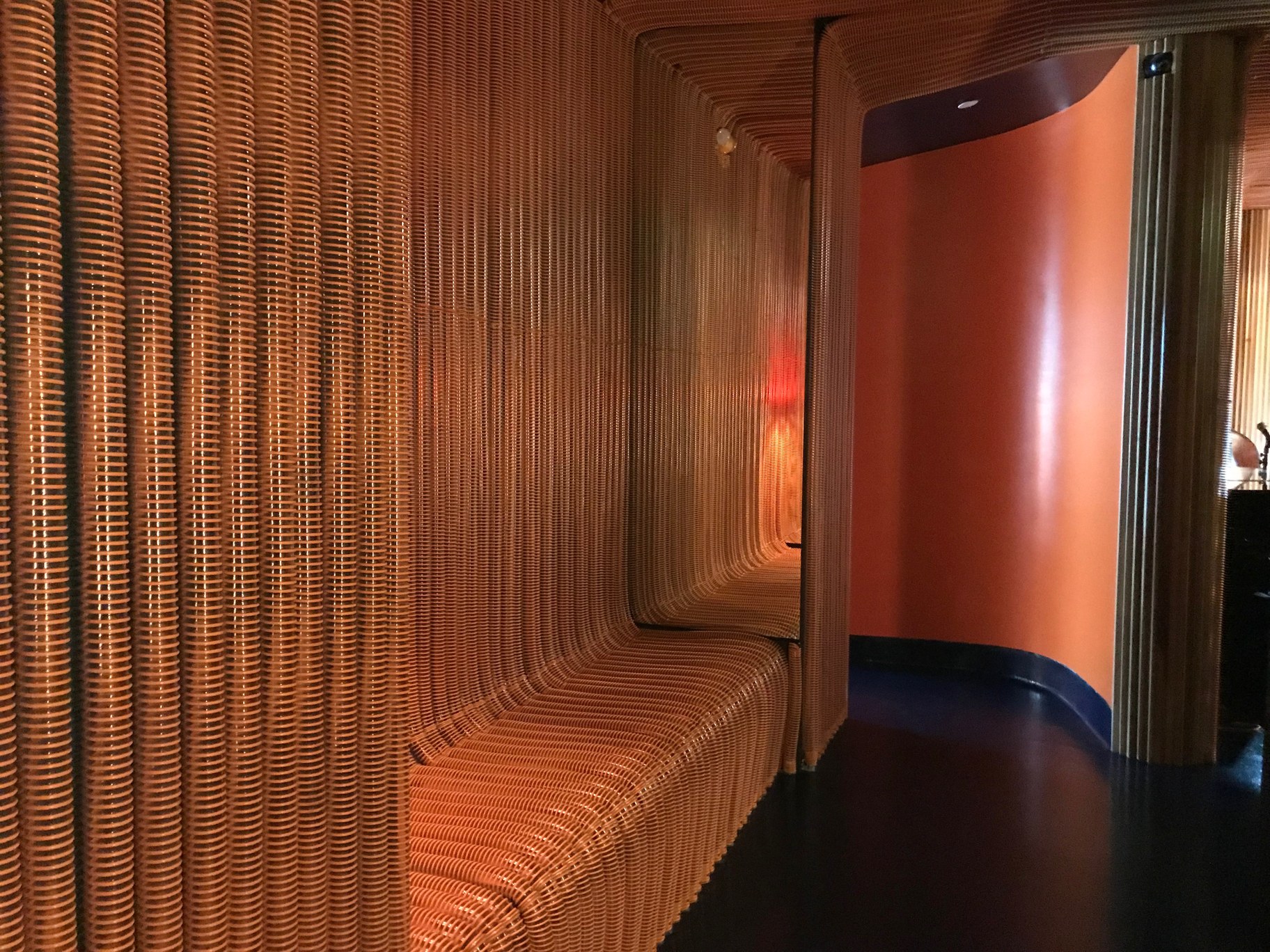 The walls of Sam First, a jazz club near LAX, are clad in industrial food processing tubing. Photo by Frances Anderton/KCRW

The club also includes curvy banquettes and vintage seating from the middle of the 20th century, a small stage for the musicians and a bar.

“One of the reasons that I think that [Selgascano] made a lot of sense to design this space is because they're so improvisational with the materials they use. And obviously jazz is a music of improvisation,” Solomon told DnA, during the intermission of a performance by LA-based bassist and bandleader Billy Mohler (with David Binney on alto sax, Joe LaBarbera on drums and Chris Speed on tenor sax and clarinet.)

“I think that it fits with the spirit of the city and the people who are drawn here. So I don't think it's an accident that they've landed here in Los Angeles and hopefully we'll embrace them.”

Selgascano in LA; The Weather Machine

Every few weeks it seems like a new shared working space appears in LA.

A journey inside the weather forecasting machine

Are you planning to leave town a week or so from now? Chances are you’ll check a weather app to figure out what to pack. And you’ll probably wind up with the right outfits.