Update: On Thursday, August 30th the City of Santa Monica announced its selection of not two but four e-scooter companies to participate in the City’s Shared Mobility Pilot Program: Lime, Bird, Lyft and Jump (owned by Uber). Bird and Lime riders had campaigned for the inclusion of Bird and Lime, after learning these companies had scored lower than Uber’s Jump and Lyft in applications for e-scooter permits. Lime and Bird get 750 e-scooters each, while Lyft and Jump get 250 e-scooters.

The City Pilot Program has selected Lyft and Uber’s Jump to provide e-bikes. Lyft and Jump will each start the pilot with 500 devices each.

The pilot starts with a total of 1,000 e-bikes and 2,000 e-scooters. The city says “the number of devices each operator is authorized to deploy may increase or decrease based on utilization and performance.”

E-scooters were birthed at the end of 2017 in the city of Santa Monica and have divided residents. For some they are a joyful, efficient and green transit solution; for others they are a maddening incursion into sidewalks and streets.

In a bid to keep all sides happy, the city is launching a “shared mobility” pilot program, to start September 17 and last for 16 months. It is intended to find the best “partners” for the City in the fledgling electric, dockless transit industry.

This Thursday, August 30, the City of Santa Monica’s Planning Director David Martin will announce his choice of two e-bike and two e-scooter companies. As part of the process, a committee evaluated applications from e-scooter providers, and gave top scores to Lyft and Uber-owned Jump.

In response, supporters of Bird - which is headquartered in Santa Monica - and Lime gathered in front of City Hall to register their protest. They argued that the two companies were being sidelined by car-loving behemoths with no experience on the streets of Santa Monica, and track records of corporate bad behavior no better, and maybe worse, than upstart start-up Bird.

However, Santa Monica’s deputy City manager Anuj Gupta reminded DnA the city’s goal is to provide “integrated mobility services” and “that may well have been part of [Uber and Lyft’s] pitch.”

So what exactly are integrated mobility services?

DnA spoke to Francie Stefan, chief mobility officer and assistant director of planning, and learned about Santa Monica’s mobility planning and what the city might expect from its e-scooter partners.

The city is currently in its “teenage years of our transition from an automobile culture toward something that's much more diverse and much more sustainable and lower emissions,” Stefan explained.

And that is bringing up strong emotions and exciting changes. These include expanded bike lanes and a forthcoming Dutch-style intersection (with parking removed to enhance safety for bikes and walkers) as well as public-private partnerships like Breeze Bike Share and a deal between Big Blue Bus and Lyft to provide car rides for seniors.

“The private sector can be a huge innovator in big physical infrastructure, whether it's gondola or rail or bus-micro transit,” said Stefan. “But there's also really important ways the private sector provides value, in terms of integration, developing the software so that you can pay seamlessly from one transit service to another, for example.”

As for what the city will be looking for in its partnership with a e-scooter company, Stefan said it might be assistance with both physical and digital infrastructure.

As for folks who love e-scooters precisely because they are dockless, Stefan said that may change.

“It is wonderfully convenient to be able to pick up a scooter and drop it off right outside the place that you're going. But when we're in the street we have to share that space. It's crucial that we put our toys away, as one of our council members astutely said. So I don't know that it'll be possible to pull up at the front door of where you're going forever,” she said.

But Stefan said her team is working to find a way that you can pull up close to where you're going, while keeping the streets safe, clear and organized for the other kids in the sandbox. 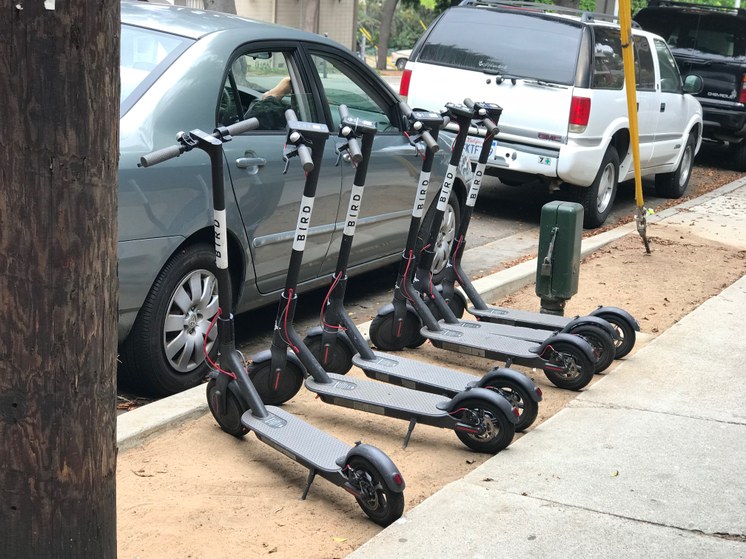 Bird scooters lined up on 4th Street in Santa Monica. Could sidewalks be adapted to serve as e-scooter park space? Photo by Frances Anderton

Update: On Thursday, August 30th the City of Santa Monica announced its selection of not two but four e-scooter companies to participate in the City’s Shared Mobility Pilot...