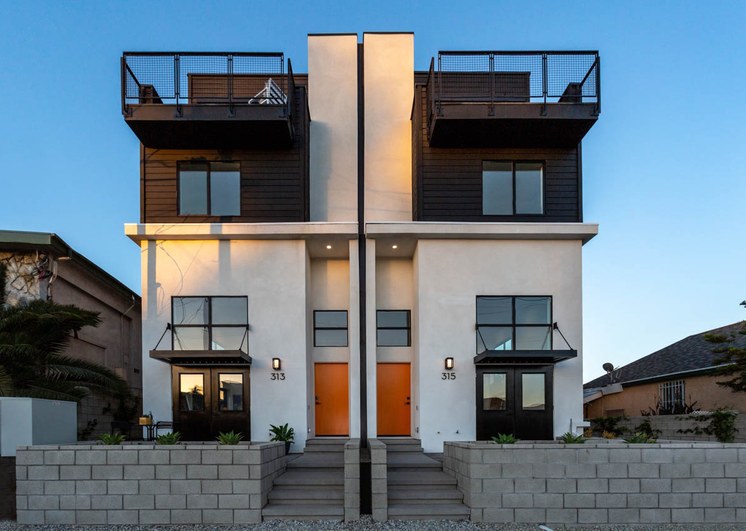 Our series “This is Home in LA” continues with a focus on LA’s small lot subdivision ordinance. It’s had a big impact, and a mixed one.

DnA visited Blackbirds, a development at the top of a steep hill in Echo Park. It’s name comes from an idea of the homes clustered “like little birds gathered around a common pool of water,” said architect Barbara Bestor.

“I just loved the fact that it is an open space with windows all around the room and particularly the windows at the kitchen which opened onto a beautiful panoramic view of the hills of Elysian Park and downtown,” said Eric Iskin, a lawyer and homeowner at Blackbirds.

The homes are black and white, with pitched roofs, large windows, and look a little like asymmetrical barns. The project includes 18 homes on just five sites. And the way Bestor managed to accomplish this was by putting more than one house under one roof.

“We were thinking of it as a sort of stealth densification of the neighbourhood,” Bestor said.

Now this “stealth density” was made possible by the LA City Council’s passage in late 2004 of the small lot subdivision ordinance. Jane Blumenfeld, a retired city planner, was principal at LA’s city planning department when the ordinance was passed, and said it was needed for a couple of reasons. First, condo construction had stopped because new owners of the condo developments would routinely form “a class” and file lawsuits.

“They would instantly sue everybody -- the architect, the developer, the contractor, everything -- and insurers finally said, either we're going to make you pay, or we're not insuring it at all. So we looked for something that didn't create a class,” Blumenfeld said. “So we created this fee simple way to do multifamily housing but look like single family homes.”

The second reason for the ordinance, Blumenfeld said, was to increase home ownership in the city.

“So this small lot subdivision created basically a third option,” she said. “So it was never seen as ‘affordable housing’ because it's not affordable, as we talk about affordable housing. But it is definitely less than comparable surrounding neighborhood houses. So it's been super successful for that reason and many several thousand have been built.” 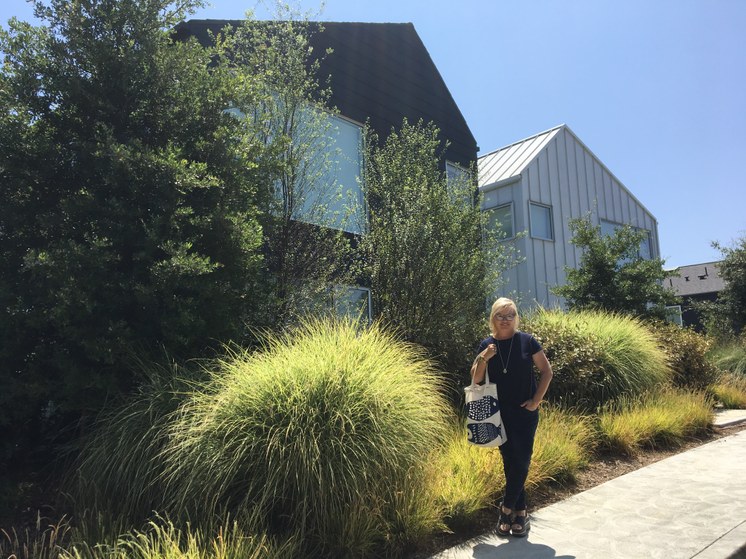 Barbara Bestor is the architect behind Blackbirds in Echo Park, a complex of 18 homes on 5 lots. She said the initial community opposition to the development had to do with fears of increased traffic, and not the physical density of the project. Photo by Avishay Artsy.

Now one of the main features of Blackbirds is what Bestor referred to as the “common pool.” Her model was the classic LA bungalow court with a shared central yard. But this central space had to accommodate cars, making it more like a cul-de-sac.

“It's not unrelated to the woonerf -- the Dutch idea of a street that is for kids to play in by day when the cars are gone with their parents at work, in the night becomes a parking area again -- that is very much like what we were looking at in terms of reinventing the cul-de-sac. As an architect we're always looking for places for like urban community-type things to be able to happen somewhat spontaneously. And I feel like at least we provided the ingredients to allow that kind of interactive sense of community to happen,” Bestor said.

As for the pushback to “stealth densification,” Bestor said that at community meetings, “the issue wasn't so much densification physically, it was the idea of traffic. That's what people were really freaking out about.” But as cars become deemphasized, she said, “there's a chance that in the not-so-distant future the amount of cars you necessarily have to house on a new property might reduce.”

Parking was a key driver of another small-lot subdivision. The five homes at Ave 57 Art Walk Homes have car stackers - a metal lift that allows residents to park one car above another.

Derek Leavitt is the co-founder and principal of the Culver City-based firm Modative. He explained that because the car stacker needs a high ceiling, that means the front room on the same level is also very high, like an art studio. Yet these houses, which are selling for around $900,000, would be out of reach for most artists.

“I think that's a little bit of the interesting part about small-lot subdivision. Originally it was supposed to be this affordable housing initiative. And I don't think it's ever really been that. We prefer the word ‘attainable’ over ‘affordable.’ It does provide people the opportunity to live maybe in a neighborhood where they couldn't live normally, just not in a house with a yard,” Leavitt said.

The five homes are split into two rows, two at the front, three in the back, and the garages face each other in the middle. Each house is about 1,900 square feet. They’re three stories, with white stucco on the ground floor and dark wood above, and a splash of orange on the front doors.

There are two bedrooms on the second floor. The uppermost floor contains kitchen, living room and a deck with chairs, and a fabulous view of Highland Park and mountains off in the distance. The bustling commercial strip of Figueroa Street is just steps away. These houses have been built on a street of single family bungalows and apartment buildings that was long part of the Highland Park “Avenues” gang territory.

“This neighborhood is definitely a little bit in transition and there's definitely a mix of uses here. When we first saw the lot my business partner and I said, no way. And then some of our younger staff who had hung out a lot in Highland Park convinced us to actually move forward with the property,” Leavitt said.

After going door-to-door, attending community meetings and speaking to residents of the neighborhood, Leavitt said they threw their support behind the project.

“I think they were excited. I think it's an area where, while there is some hesitation, there's also some excitement about new development coming to this area,” he said.

Modative has built around 40 small lot developments. But Leavitt said they have become a challenge, for several reasons.

“Land prices are high, construction prices are high, the timeline is still taking a very long time to get the projects through. We’ve done a major re-focusing in the last year and a half,” he said.

Their new focus is on building accessory dwelling units (the topic of episode #2 of “This is Home in LA”). ADUs, he said, “in many ways for us continues our mission of attainable housing, but it's a much faster process.”

So what is the legacy of the small-lot subdivision ordinance? It’s added density, but are these projects in scale with residential neighborhoods dominated by single-family homes?

“In the beginning of the small lot subdivision, the projects were very small. I'd say roughly under 20, usually even under 10,” said Blumenfeld. “But after a while they got bigger, taller, narrower. Bigger companies were doing much bigger projects, like 30, 40, 50 units. I saw one before I left the city that was like 100 units, so it was very cookiecutter-like tract housing.”

Despite some of the unintended consequences, Blumenfeld said, she’s pleased the ordinance passed.

“The proof is in the pudding. There's been several thousand units. People are living in units. I’d say that’s a success.” 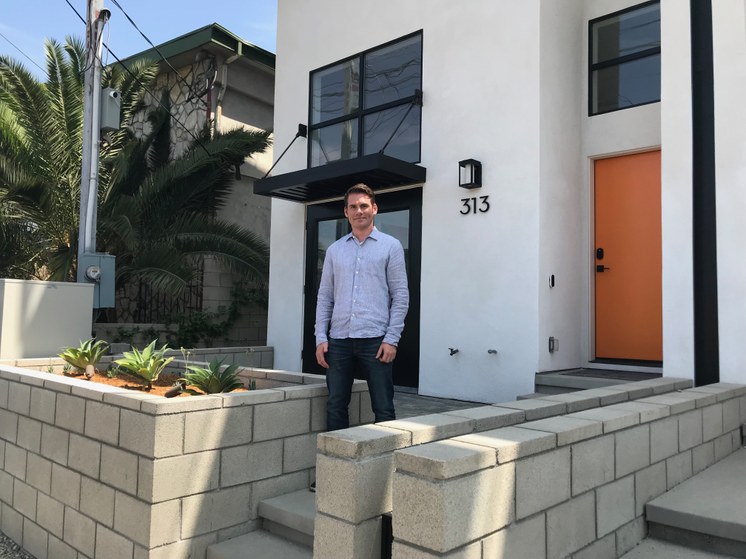 Derek Leavitt, co-founder and principal of the Culver City-based firm Modative, estimates that he’s designed 35-40 small-lot subdivisions, including this one in Highland Park. Of the ordinance that enabled such projects, Leavitt said, “we prefer the word ‘attainable’ over ‘affordable.’ It does provide people the opportunity to live maybe in a neighborhood where they couldn't live normally, just not in a house with a yard.” Photo by Frances Anderton.

Update: On Thursday, August 30th the City of Santa Monica announced its selection of not two but four e-scooter companies to participate in the City’s Shared Mobility Pilot...