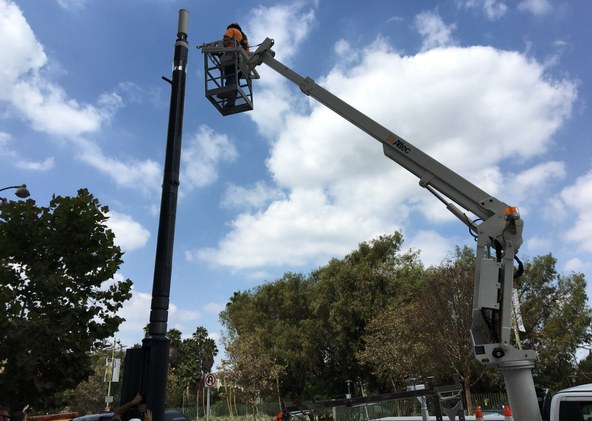 Workers install a "smart node" on Wilshire Boulevard. It's part of a
pilot project led by the City of LA's Bureau of Street Services.
Photo by Avishay Artsy

There's an experiment going on in Los Angeles right now - to replace streetlights with multi-functional "smart nodes" that are part of a networked system of city infrastructure.

DnA happened upon the installation of a "smart node" on Wilshire Boulevard, designed by Australian lighting company Ene-hub. It's a slender, slate grey, segmented pole. Inside several of these sections is electronic equipment. 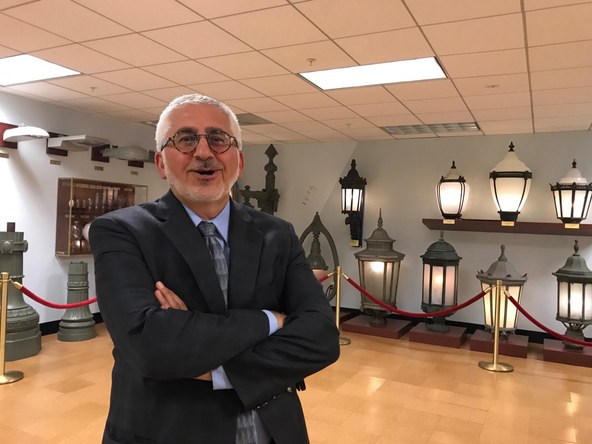 Ed Ebrahimian, director of the city of LA's Bureau of Street Lighting
Photo by Frances Anderton

The company is working alongside Ed Ebrahimian, director of the city of LA's Bureau of Street Lighting. He sees many prospects for the "smart node" besides lighting.

"We can have sensors installed on street lighting poles, like CO2 sensors, like temperature, or even gunshot detection sensors. We can have cameras, we can stream video. So, sky's the limit, frankly," Ebrahimian said.

And what happens to LA's streetlights? The Smart Node is a test of what might be a replacement for all of the city streetlights, and as the technology evolves, Ebrahimian predicts the LED lighting will get warmer.

Workers install a "smart node" on Wilshire Boulevard. It's part of a pilot project led by the City of LA's Bureau of Street Services.

CAFAM goes to the border

"The Wall: A Border Game" by Ronald Rael and Virginia San Fratello, at CAFAM's exhibition "The US-Mexico Border: Place, Imagination, and Possibility."

What happened to the Crenshaw Cowboy?

Lovell Moore, the "Crenshaw Cowboy," on board one of his sculptures.