Family members, reunited after fleeing Kosovo, pass 2-year-old Agim Shala through the barbed wire fence into the hands of his grandparents at a camp in Albania. On view as part of the exhibition “W|ALLS: Defend, Divide, and the Divine” at the Annenberg Space for Photography. Photo credit: Carol Guzy/The Washington Post

It’s been 30 years since the fall of the Berlin Wall. Now there are more border walls than ever before.

“When the Berlin Wall came down in 1989, there were only 30 walls separating nation states around the world. But then now there are over 77, and most of those have gone up in this century, and the century is only 19 years old,” said Jen Sudul Edwards, the curator of “W|ALLS: Defend, Divide, and the Divine.”

The show at the Annenberg Space for Photography includes images of walls, concrete buffers, steel fences and electronic barriers from around the world.

“One of the ideas is that ‘walls’ is not just the literal definition of a solid barrier, but it's all barriers. And those are both physical, metaphysical and emotional,” Edwards said. 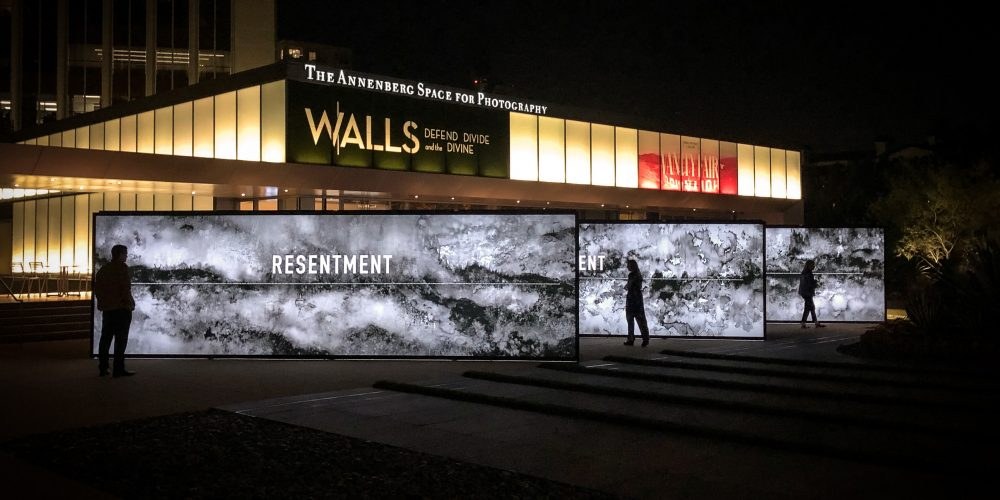 The installation “Light the Barricades,” by artists James A. Reeves and Candy Chang at the Annenberg Space for Photography.

Before you even enter the gallery, just after you come up the stairs to the plaza in front of the Annenberg, you will find three massive lightbox walls. They’re essentially partitions, about the dimensions of shipping containers. The project is called “Light the Barricades.” Each wall bears one word, in large letters: resentment, judgment, and doubt. These walls were created by an artist duo: James A. Reeves and Candy Chang.

“I'm really interested in the relationship between our public spaces and our emotional health. I think that we all have mental health issues, and it's so easy to ignore them when we're surrounded by a million distractions these days,” Chang said. So how can we create more spaces to tend to our psyches? You know, how can our communities better serve our psychological health?” 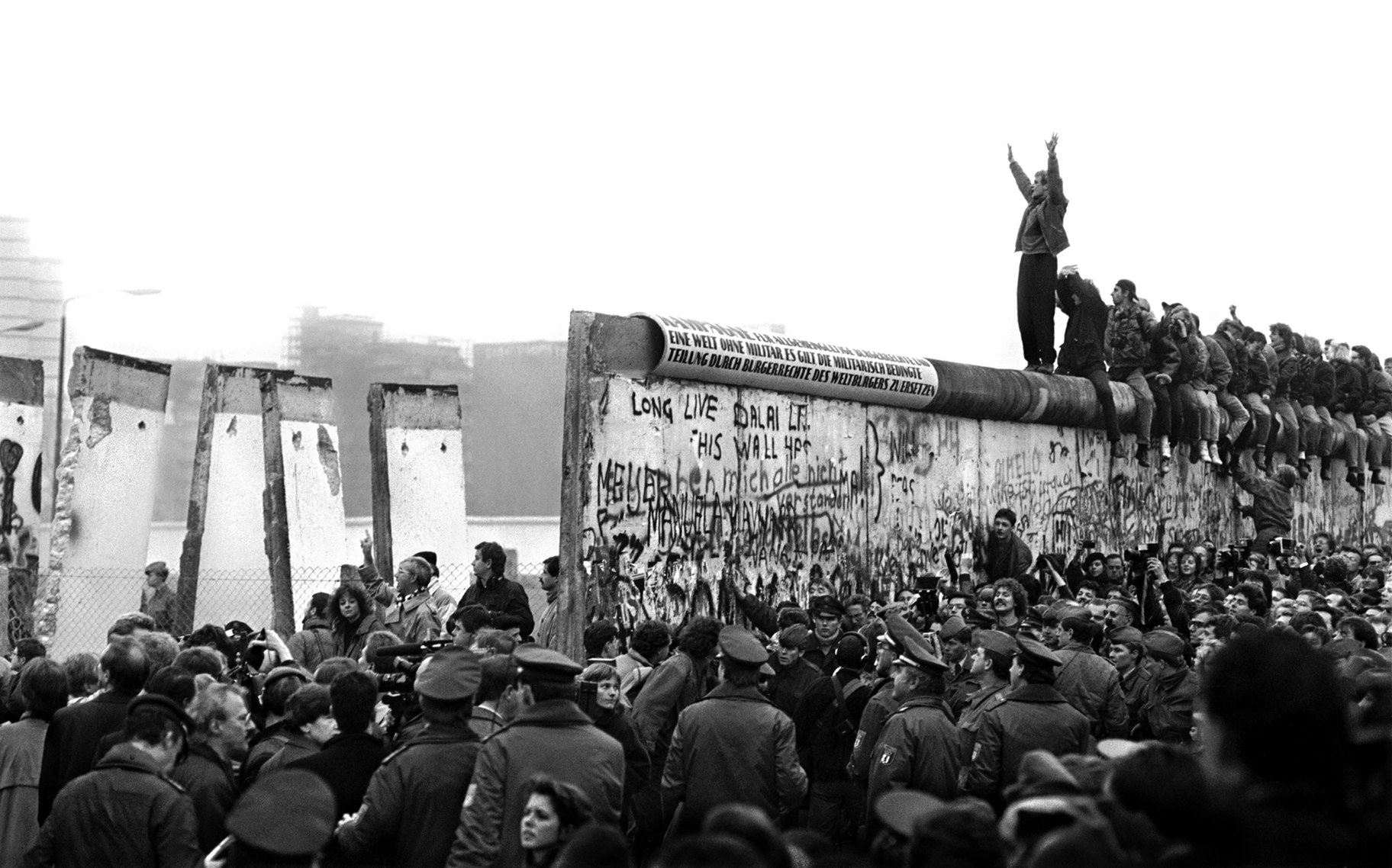 East Germans pour through the Berlin Wall in 1989 as a West Berliner cheers them on from atop. (Carol Guzy/The Washington Post) On view as part of the exhibition “W|ALLS: Defend, Divide, and the Divine” at the Annenberg Space for Photography.

Walk into the gallery, and the first thing you see is a video by the artist Tomas van Houtryve. Video from a drone starts out close, showing waves slapping up against a steel fence.

“It's really soothing and lovely. And as the camera pulls back, you start to realize that this is in fact the U.S.-Mexico barrier fence that is jutting into the Pacific Ocean in this completely absurd way,” Edwards said. “I mean it's trying to control nature, which is really impossible.” 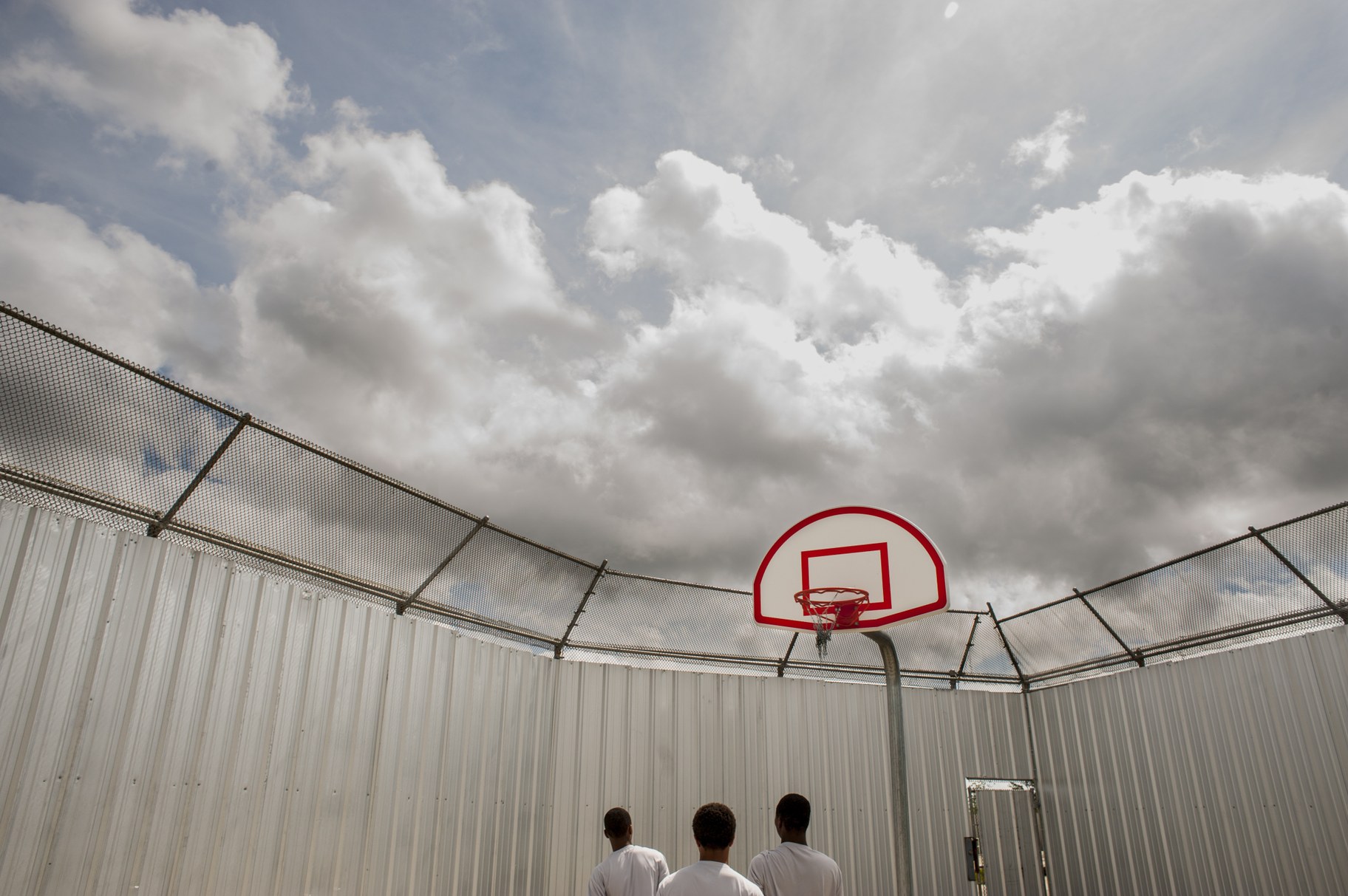 Inside the walls of a prison in New Orleans. (Raymond Thompson Jr) On view as part of the exhibition “W|ALLS: Defend, Divide, and the Divine” at the Annenberg Space for Photography.

Keep walking through the exhibition of photographs, and you’ll come across a wall of panoramic images by the German photographer Kai Wiedenhöfer, showing walls in Cyprus, Iraq, Spain, Germany, Israel and Turkey. Some of them are painted with murals, and are actually quite beautiful.

“Photography always struggles with that paradigm. I mean, Susan Sontag wrote about that early on in the 60s about the idea of photography inherently being an exploitative medium. And so that's always a concern. But photography is also one of the only art forms that truly is I feel accessible to all people,” Edwards said.

But what about the reasons to have walls? Like, shooters in schools? Or fences around homes? Edwards hopes the exhibition will show the nuance and “the huge spectrum of grey that exists between those polar sides” for and against walls. 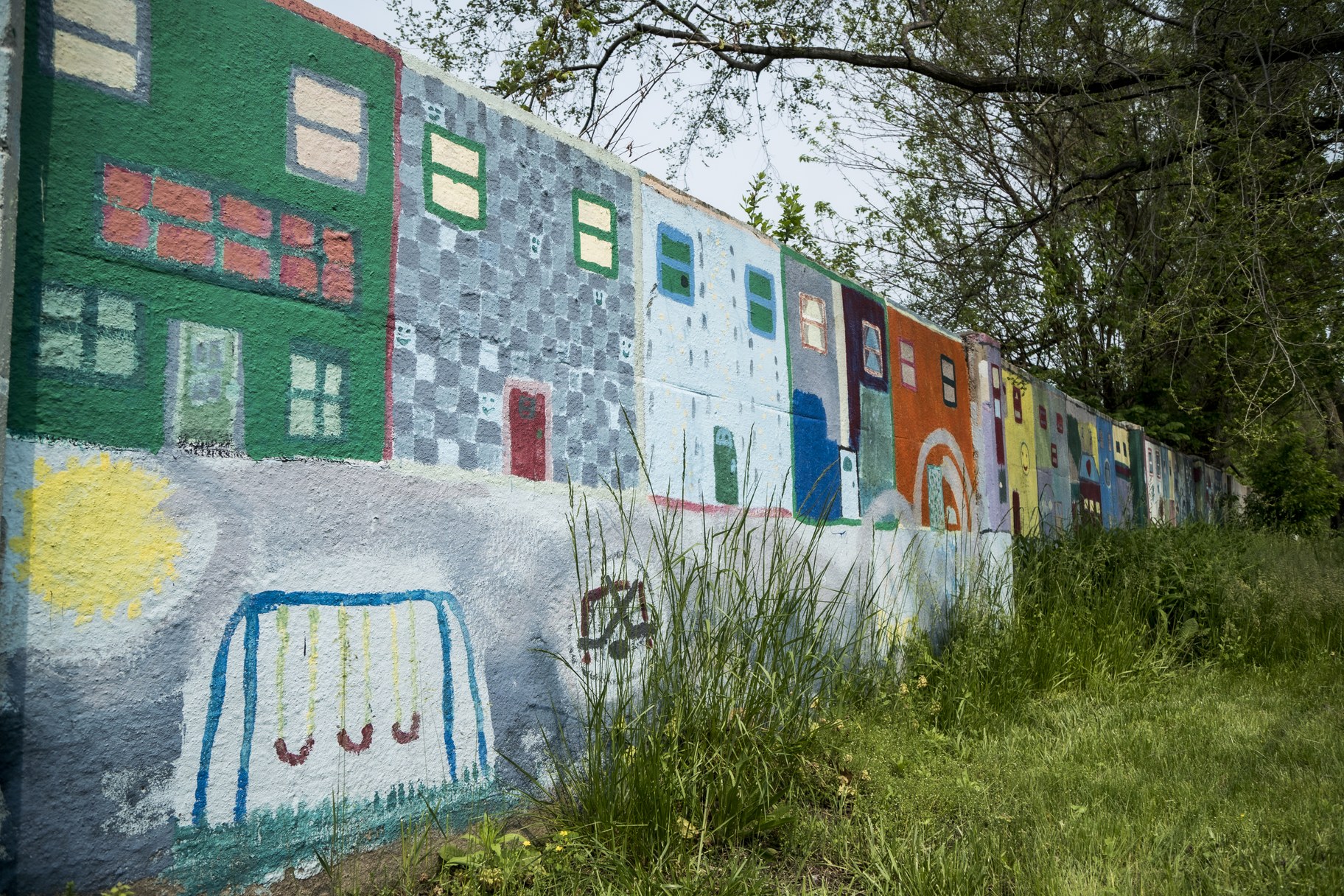 The Detroit Wall. Photo by Shan Wallace. On view as part of the exhibition “W|ALLS: Defend, Divide, and the Divine” at the Annenberg Space for Photography.

One of the walls included in the show is the Eight Mile Wall in Detroit. The neighborhood Eight Mile was made famous in the movie about Eminem. The Eight Mile wall is half a mile in length, and is now covered in murals and other artworks. It was photographed by Shan Wallace.

“The wall isn't necessarily walkable because it divides people's actual backyards and homes. So if you want to really see the wall, you have to kind of walk on top of it or go in on people's property,” Wallace said.

So why does the wall still exist, now that segregation has been illegal for decades?

“There were some talks to knock the wall down,” Wallace said. “But then there was a community initiative to bring people together, to create communion, to nurture this village, to paint and transform the wall.” 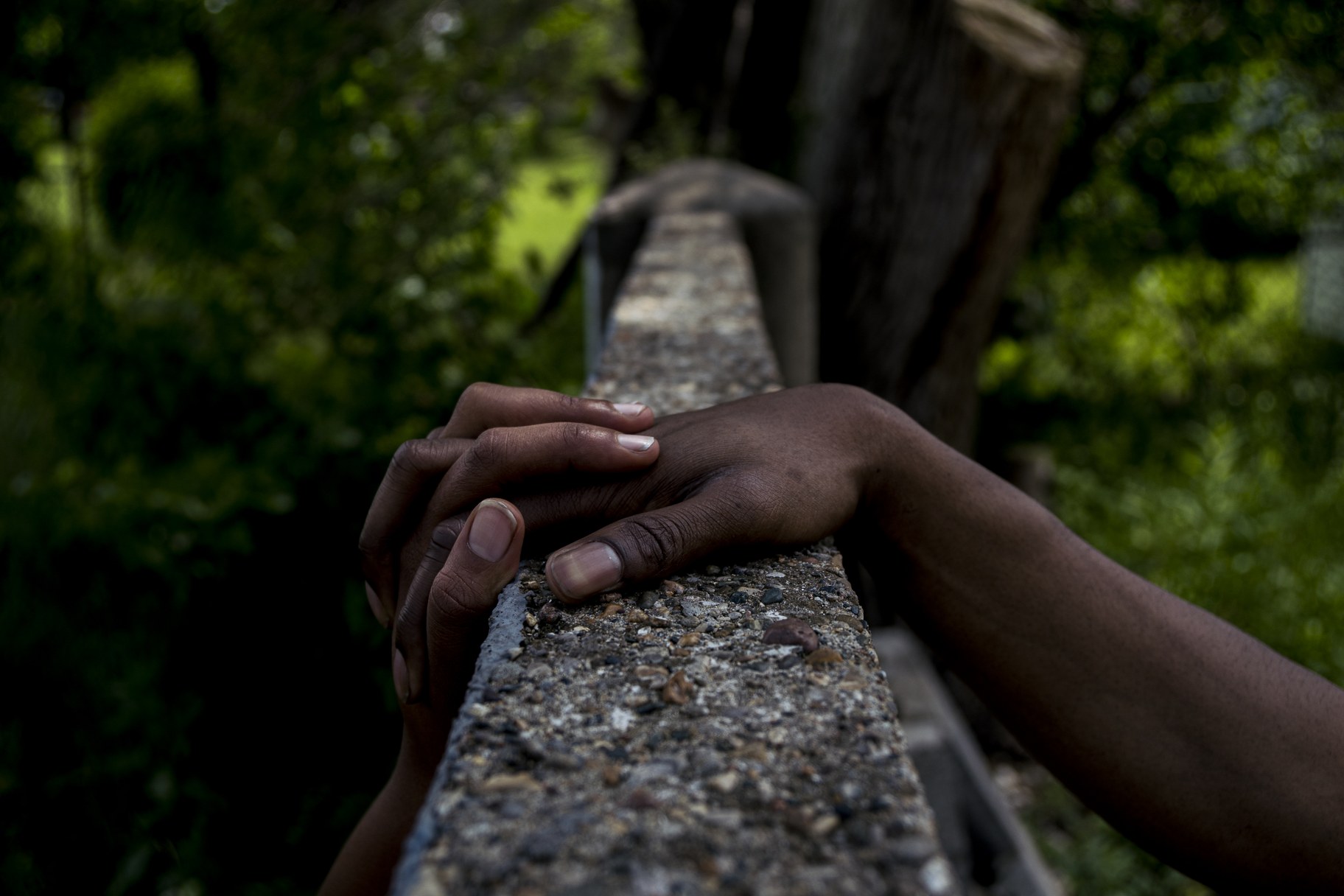 The Detroit Wall. Photo by Shan Wallace. On view as part of the exhibition “W|ALLS: Defend, Divide, and the Divine” at the Annenberg Space for Photography.

“W|ALLS: Defend, Divide, and the Divine” is on view through the end of the year at the Annenberg Space for Photography.

This exhibition comes with some wall-related programming. Next week, Pink Floyd’s “The Wall” will be screened to mark its 40th anniversary.

And this Friday, you can hear from Judy Baca, an artist who took on a divisive border in Los Angeles: the concrete channel that makes up much of the LA River.

Judy Baca started painting The Great Wall of Los Angeles in 1974. That vision took the shape of a collective history in Los Angeles, told in paint by over 400 youth volunteers.

The mural is half a mile long, and it is still in progress. It is in one of the LA Rver’s tributaries, the Tujunga Wash drainage canal in the San Fernando Valley.

You can see her and the street artist Saber in discussion this Friday at the Annenberg Space for Photography.