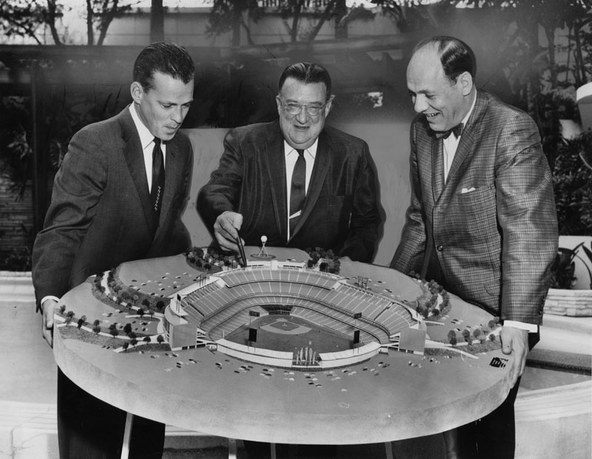 Dodger Stadium is now an icon of midcentury Los Angeles. But its birth was a painful one, and the battles over its construction tore Angelenos apart even as it now brings communities together.

As Los Angeles celebrates the Boys in Blue getting back into the World Series for the first time in almost 30 years, we recall the controversial early days of this beloved stadium, and why "the city downtown establishment wanted Dodger Stadium to be the first piece in the building of a modern world class downtown Los Angeles," as historian Jerald Podair says. We also discuss the irony that Latinos are among the team's biggest fans, even though the stadium occupied the Chavez Ravine site from which many Mexican-American families were uprooted.

Photograph caption dated August 26, 1960 reads, "With apparently all obstacles now out of the way, actual construction of the Los Angeles Dodgers' baseball stadium can get...

Superba Food + Bread in Venice, designed by Design, Bitches Catherine Johnson and Rebecca Rudolph run a firm that is behind the buzz-worthy restaurant designs for...