Affordable housing in Los Angeles can be ambitious in design and liveability, but also costly. That’s because it’s produced by non-profit developers who have to meet a bunch of conditions that add on dollars. Would it be cheaper if the private sector built affordable housing?

DnA met with Lawry Meister, president of FlyawayHomes LLC and CEO of the Steaven Jones Development Co. They are working with the nonprofit The People Concern to build “the first permanent supportive housing project funded with social impact equity,” on a lot in South Los Angeles.

Meister says there are many obstacles to building affordable housing.

“It's very expensive. It takes a long time to get accomplished. Funding is very tricky to put together with low income tax credits, and with the tax cuts maybe those are becoming less favorable as an investment vehicle. The NIMBYism is delaying projects,” she said.

One of the ways her firm has sped up the permitting and construction process is by using modular units, which are approved by the state of California and made in a factory while they did their site work.

The walls are fully insulated, heated and air conditioned, and from the inside look like any other traditionally-built apartment building. The building comprises eight pods of four-bedroom units. Clients have their own private bedrooms but share a bathroom, dining area, living space and kitchen.

FlyawayHomes is just one developer that’s looking to shipping containers as an affordable housing model. This strategy has even earned a nickname: “Cargotecture.”

An architecture + planning firm called KTGY plans to break ground in September on a homeless housing complex in Westlake that’s made of shipping containers. The four-story building, called Hope on Alvarado, will hold 84 studio and one-bedroom apartments.

There are some obvious benefits to building with shipping containers. They are strong, durable, easily available and relatively cheap. But critics argue that shipping containers are not a simple housing solution. They’re designed to be filled with freight, not people, and require expert welders to make them habitable, which further drives up the cost.

Another way FlyawayHomes has reduced cost is by using non-union workers, which cuts about 30 percent of the cost of labor. That’s something that is required of non-profit developers.

“I don't know why the workers should be subsidized by our project. I sort of look at it as, by increasing the cost of the project that's that many fewer people that we can afford to house,” Meister said.

Meister says she hopes to complete this pilot project in September, and then build more shipping container homes. 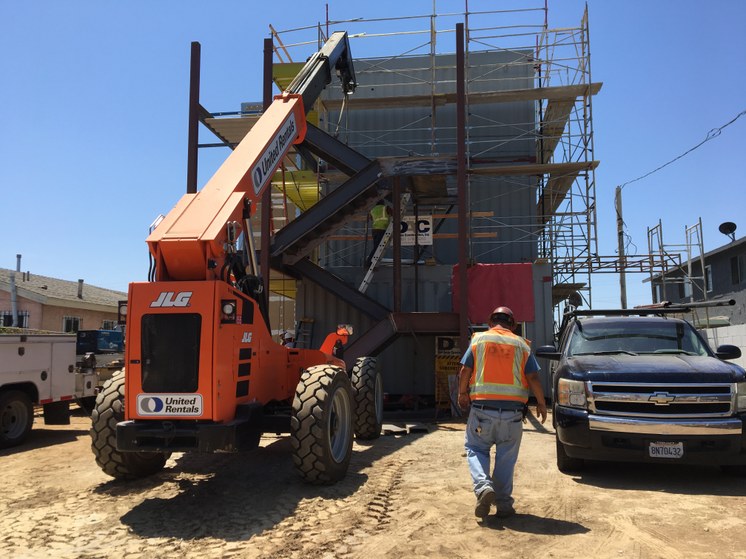 Workers construct an affordable project out of shipping containers for FlyawayHomes in South LA. Photo by Avishay Artsy.

Affordable housing in Los Angeles can be ambitious in design and liveability, but also costly. That’s because it’s produced by non-profit developers who have to meet a bunch...