But it did bestow an Honor Award for architecture on nine buildings, including the new Federal Courthouse in downtown Los Angeles, on the south of 1st at Broadway. This building -- an elegant 10-story cube clad in pleated glass that appears to hover over a public plaza -- gained fame as the backdrop in a widely published picture from last year’s Women’s March.

It was designed for the General Services Administration by the Los Angeles office of Skidmore Owings & Merrill, or SOM, whose landmark buildings include the Willis Tower in Chicago, the Freedom Tower in New York and Burj Khalifa in Dubai.

Jury chair Lee Becker tells DnA “the building fits its context extremely well, has a really sophisticated facade,” and jurors were especially impressed by “the quality of light in the building... oftentimes the courtrooms wind up in the middle of the building and don't have good light. And SOM did an amazing job at having light filtered down through the building.”

DnA talks with SOM architects Michael Mann and José Palacios about how the courthouse represented a Rubik’s Cube of a design challenge (they put four courthouses on every floor, around an atrium, and arrived at a perfect cube) as well as their excitement at seeing “how this building became a part of the city” when crowds packed the plaza for the 2017 Women’s March.

We also hear from Catherine Opie, creator of the public art in the atrium, about her cascade of photographs of Yosemite Falls that she hopes convey “the scales of justice,” so that all of a sudden in the middle of the piece you go from the hope and light of the atrium to the dark murky forest of Yosemite “in the same way that if you have to go before a federal judge your life might be in that same place.” 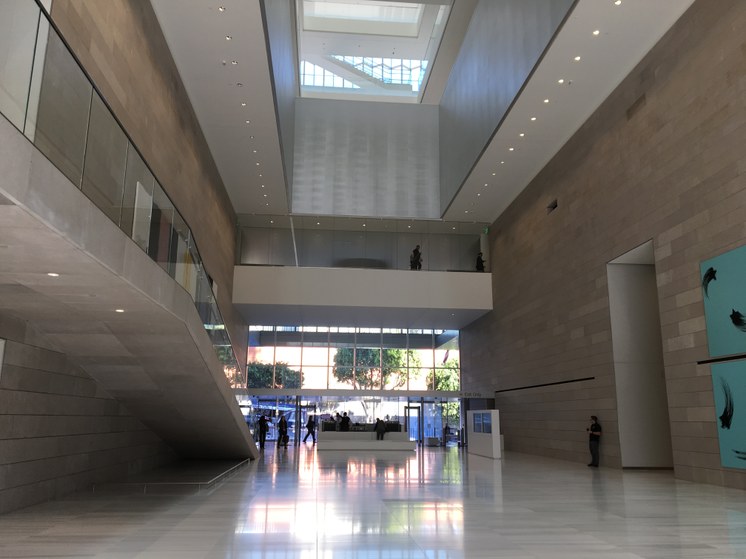 The interior of the new federal courthouse in downtown LA. Photo by Avishay Artsy.