CicLAvia and Stories from Wilshire Boulevard

This weekend's CicLAvia connected non-motorists from downtown to Venice beach by clearing one side of the road of cars; and it was the ride's biggest ever, maybe because it offered an open ride to the beach. Seeing thousands of bikers of all ages pour into Venice – without the struggle to find parking -- begged the question: couldn't the road be opened like this every weekend, making those summer beach visits so much easier for many more people? CicLAvia is gearing up for its next ride, to be on Wilshire Boulevard from downtown to Fairfax in late June. And this one has an added layer: stories, about the buildings and urban design on that boulevard that took place in the time period being covered by this summer of architecture shows: Pacific Standard Time Presents: Modern Architecture in L.A. 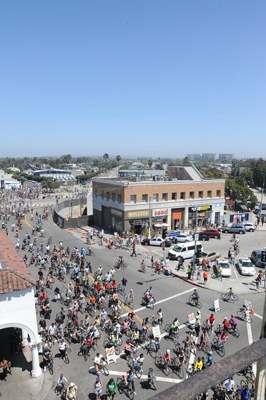 Twenty-five years ago urban designer Doug Suisman wrote a pamphlet called "LA Boulevard: Eight X-Rays of the Body Public." He had moved to LA in 1983 and found the street life a little lacking. So he convened meetings about Wilshire, with urban planners and later designed the red bus logos, shelters and signage for the Metro Rapid on Wilshire. He says the buildings on Wilshire were not designed for walkers but were conceived to appeal to drivers. However, a new generation of Angelenos is changing the way the street is viewed and used. 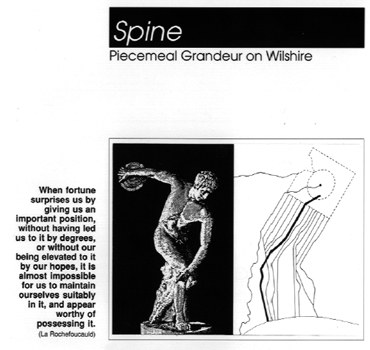 (The segment about Wilshire Boulevard was produced by Edward Lifson for CicLAvia, part of Pacific Standard Time Presents: Modern Architecture in LA. Original music is by Steve Wight. Other music by Al Bowlly. The June 23 CicLAvia opens Wilshire Boulevard from downtown to Fairfax Avenue. Listen to more Wilshire Boulevard stories, on DnA.)

Transformations, in Wood; On Wilshire Boulevard

Stefan Bishop is a real estate developer turned designer-maker who works in a spacious studio in Glassell Park near Mount Washington. There he creates objects at the...

CicLAvia and Stories from Wilshire Boulevard

This weekend's CicLAvia connected non-motorists from downtown to Venice beach by clearing one side of the road of cars; and it was the ride's biggest ever, maybe because it...