The new art campus is made of concrete and wood buildings. Photo credit: Iwan Baan

The Hayden Tract in Culver City has long been a mecca for design enthusiasts.

That's where you find offbeat conversions by the architect Eric Owen Moss. Think warehouses and light industrial buildings that have been invaded by contorted shapes, sharp geometries or twisting metal structures.

The structures have names like Stealth, Beehive, Umbrella and Waffle -- the wavy metal home of the restaurant Vespertine. 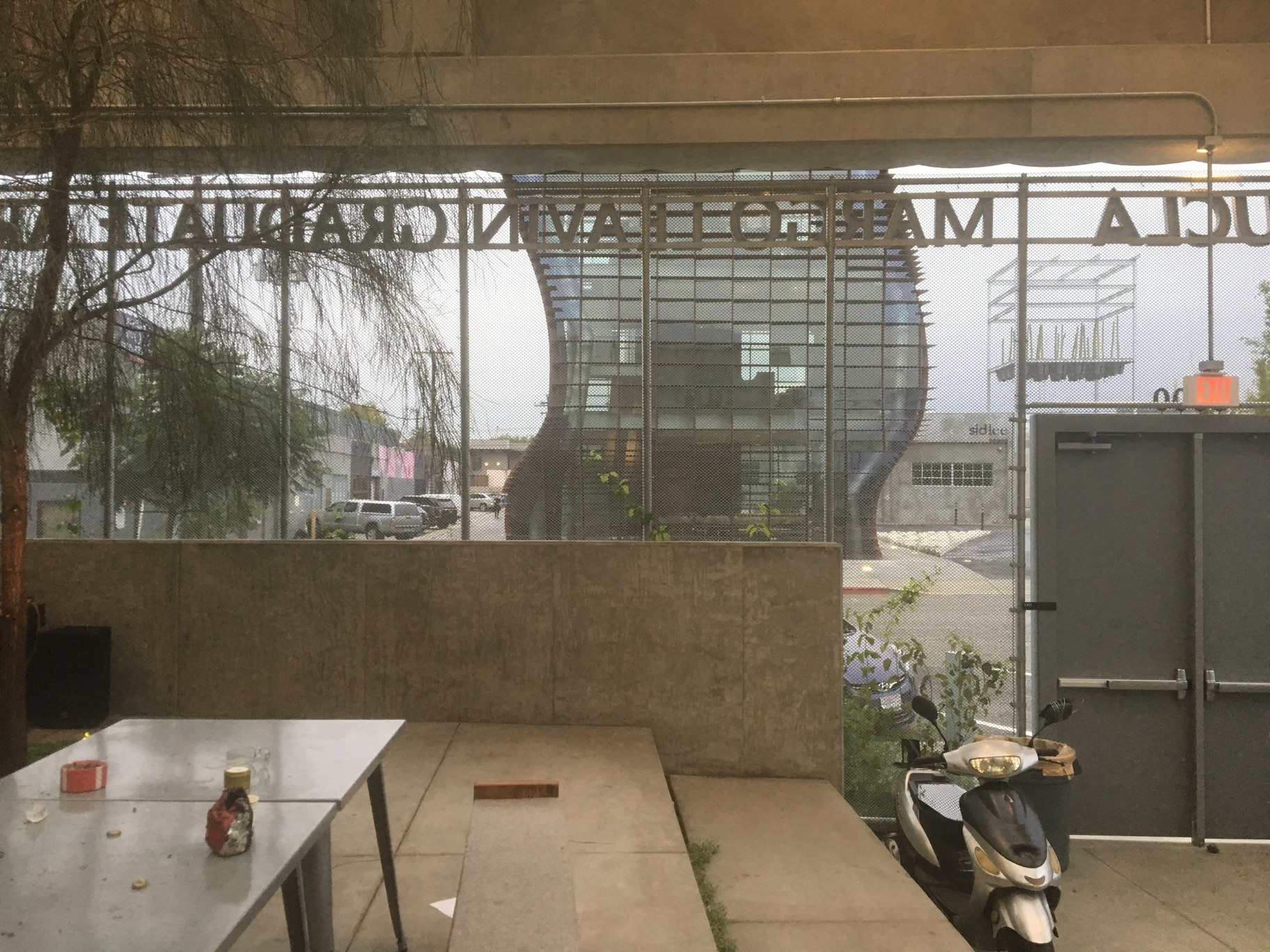 An entry garden at the UCLA Margo Leavin Graduate Art Studios, with a view of Eric Owen Moss’ Waffle building, home to the restaurant Vespertine. Photo by Avishay Artsy/KCRW

Now comes a building in the Hayden Tract with a very different character: The UCLA Margo Leavin Graduate Art Studios.

“Originally, it's an old mattress factory that has been there since the 1940s. And UCLA graduate art studios have been occupying that building since the 80s,” said Mark Lee, co-principal of the firm Johnston Marklee. “But over time, other buildings, smaller buildings have been added on around it.”

“We basically refurbished and renovated the mattress factory, the main building. We tore down all these ancillary buildings. And we built a new building around the existing building.” 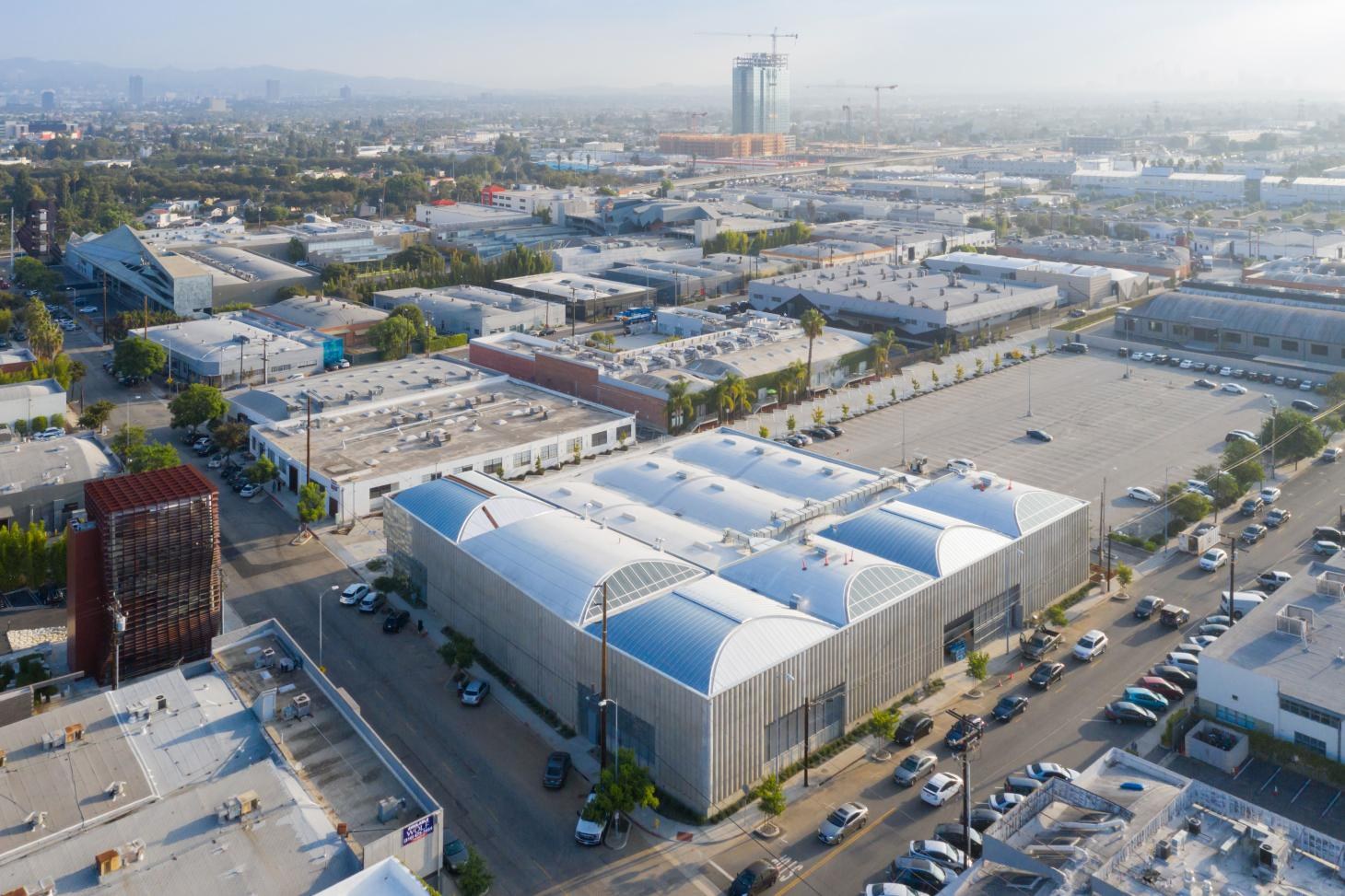 A “basic refurbish” is an understated way of explaining an understated but alluring project that bears out a recent L.A. Times headline that describes Sharon Johnston and Mark Lee as “The L.A. architects who design buildings that make you say, ‘Huh?,’ then ‘Wow!’”

The designers kept the studios raw and flexible, leaving structure and piping exposed. But they added surprising details like tilt-up concrete facades with a “pillowed” surface designed to allow a play of light and shadow across its surface.

The building’s corner entrance on Hayden is a surprise: uninsulated courtyard space with trees and skylit trussed roof, providing a contemplative way into the studios.

“We thought of that as a space that purges one’s experience before you walk into the art studios,” Lee said. 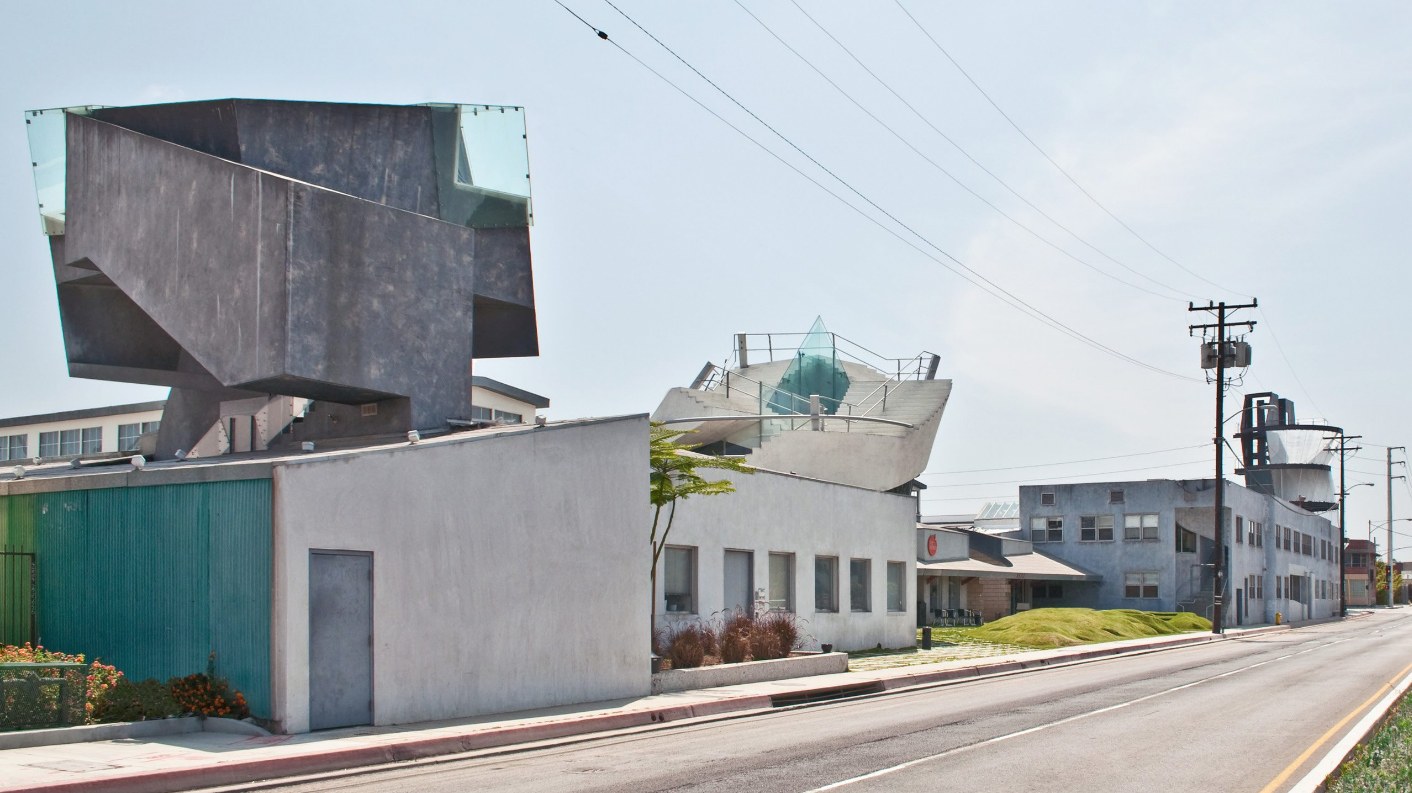 As for the neighboring buildings with strong personalities, Lee said they certainly considered, and admire, Eric Owen Moss’ architecture, but didn't feel the need to shout at the same volume.

“We look at a building not only as a single building, but in a larger context,” he said. “We see our building as part of reinforcing that existing context, that his work actually stands out more.”

Lee mentioned the influence of Austrian architect Adolf Loos, who was active in the early 20th century.

“He said that buildings on the exterior should have a gentleman or ladylike quality, where all the things that you suppress and subvert could be in the interior,” Lee explained. “I think this is an interesting quote for us because it says a building, no matter what that function is, whether it's a private building or a public building, it has a certain civic larger urban responsibility, a certain decorum.” 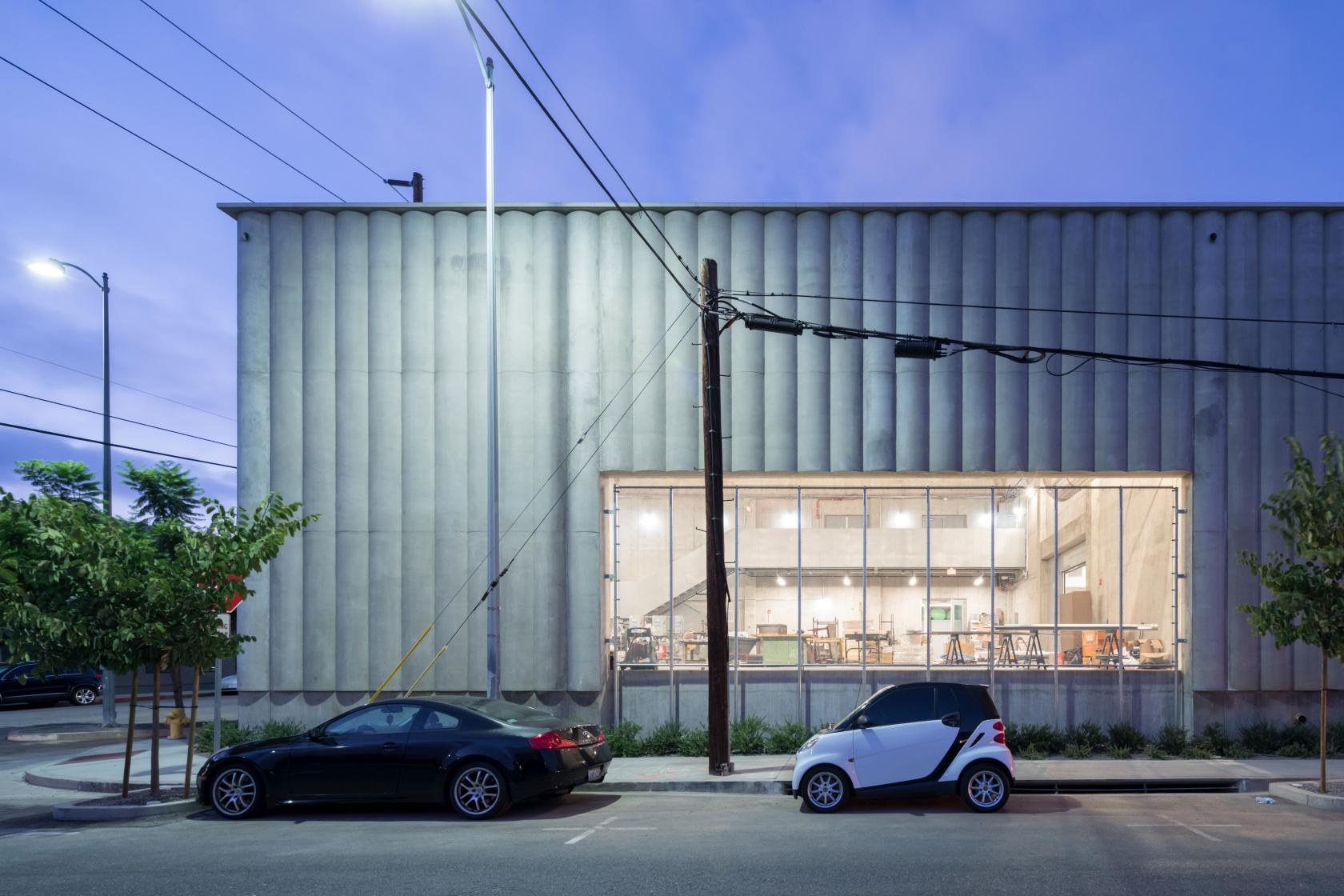 At night the new studios become windows into the creative process, though some students find the looky-loos distracting. Photo credit: Iwan Baan

The architects also had to consider what the students wanted out of the building, which in part meant not dictating the function of the building too severely.

“Many of the students didn't want a new building,” Johnston said. “They really love the sort of rawness, almost decaying quality of the existing building. And so too much evident design would in a way counter the creative programmatic mission of the building.”

So did they give the students what they hoped for: a new building that doesn’t feel new? We got reactions from a couple of the graduate art students. 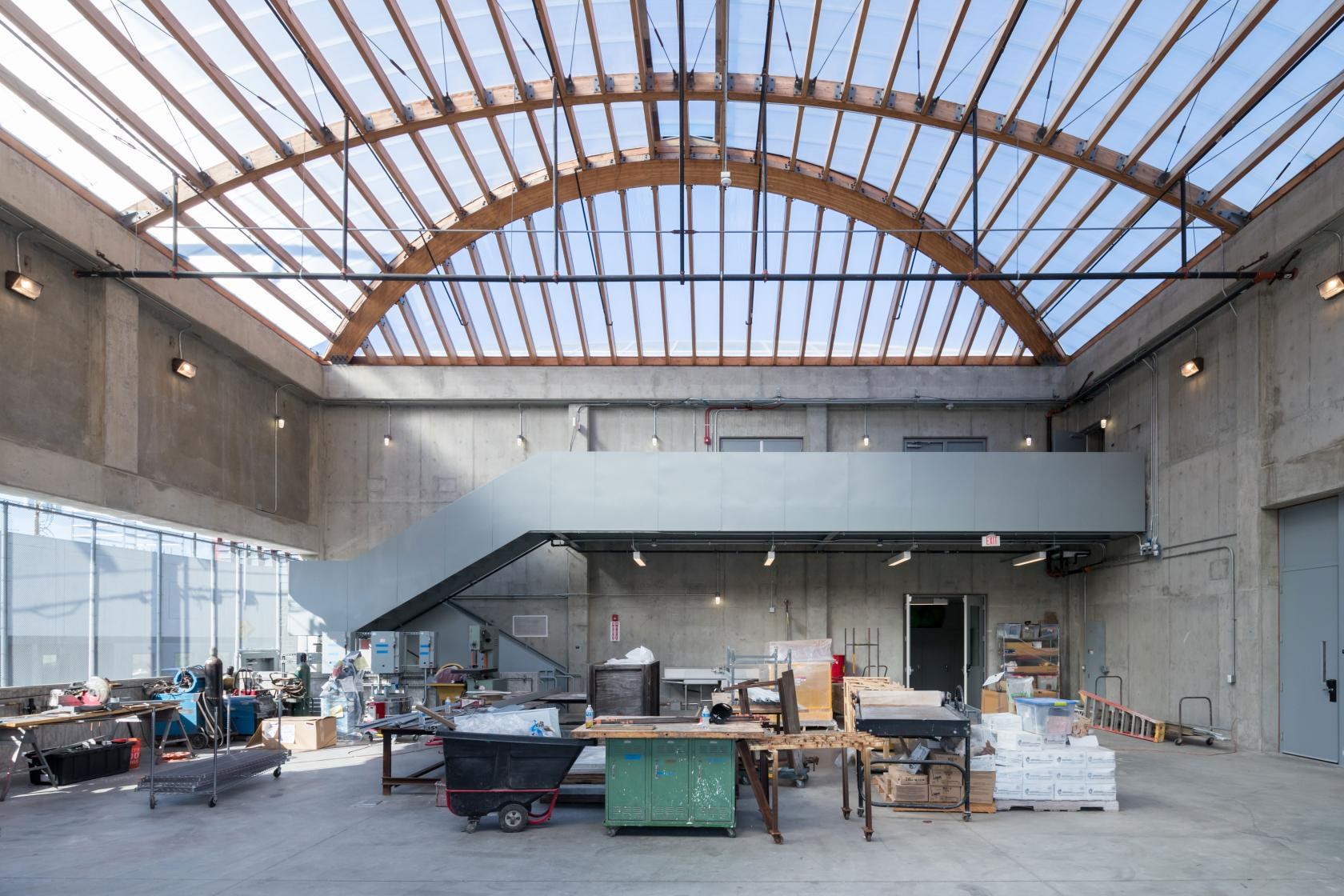 “They didn't overproduce the space. The materials lend itself to feeling comfortable in making mistakes. You can see all of the framing. You can imagine that the studio walls can be rebuilt if necessary,” said Jane Orr.

“One of my biggest fears when I walked into this building for the first time was like, ‘Are we going to be able to live and function as artists within the space?’ And the answer is yes.”

Valeria Tizol also appreciated the common areas that allow her to interact and collaborate with fellow students. And the open-air areas are nice in the morning.

At night, however, “it can be like a zoo,” with architecture gawkers peering in and asking for tours. “But it's nice to get some fresh air and actually see the sun.” 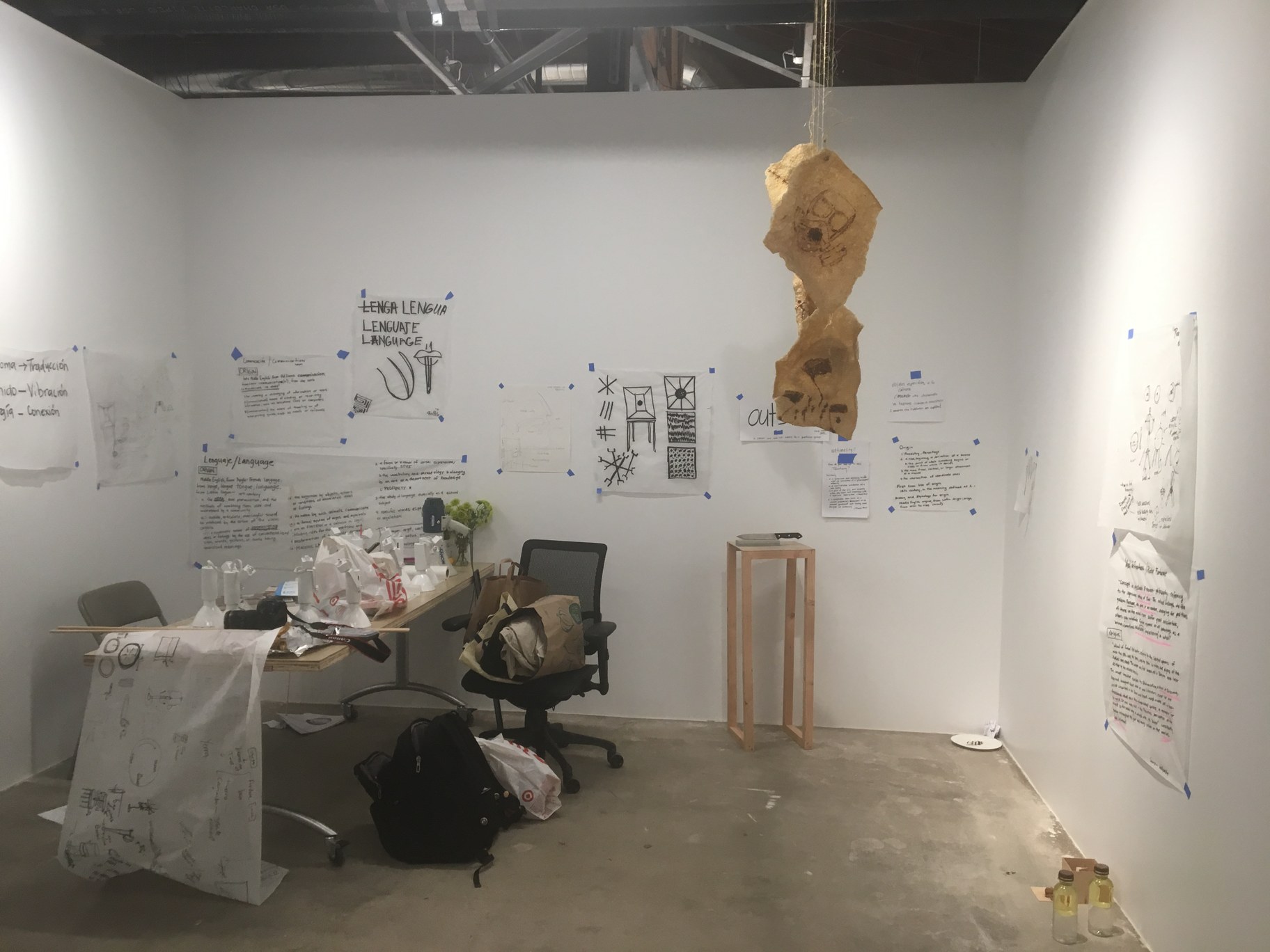 Johnston Marklee’s portfolio includes a couple of unabashedly “wow” buildings -- their spidery, multi-faceted gas station Helios House on Olympic at Beverly; and Hill House, their faceted rock of a house on Chautauqua Blvd in Pacific Palisades.

But they brought their “decorous” approach to a recent signature building of theirs, the Menil Drawing Institute, at the famed Menil Collection in Houston. 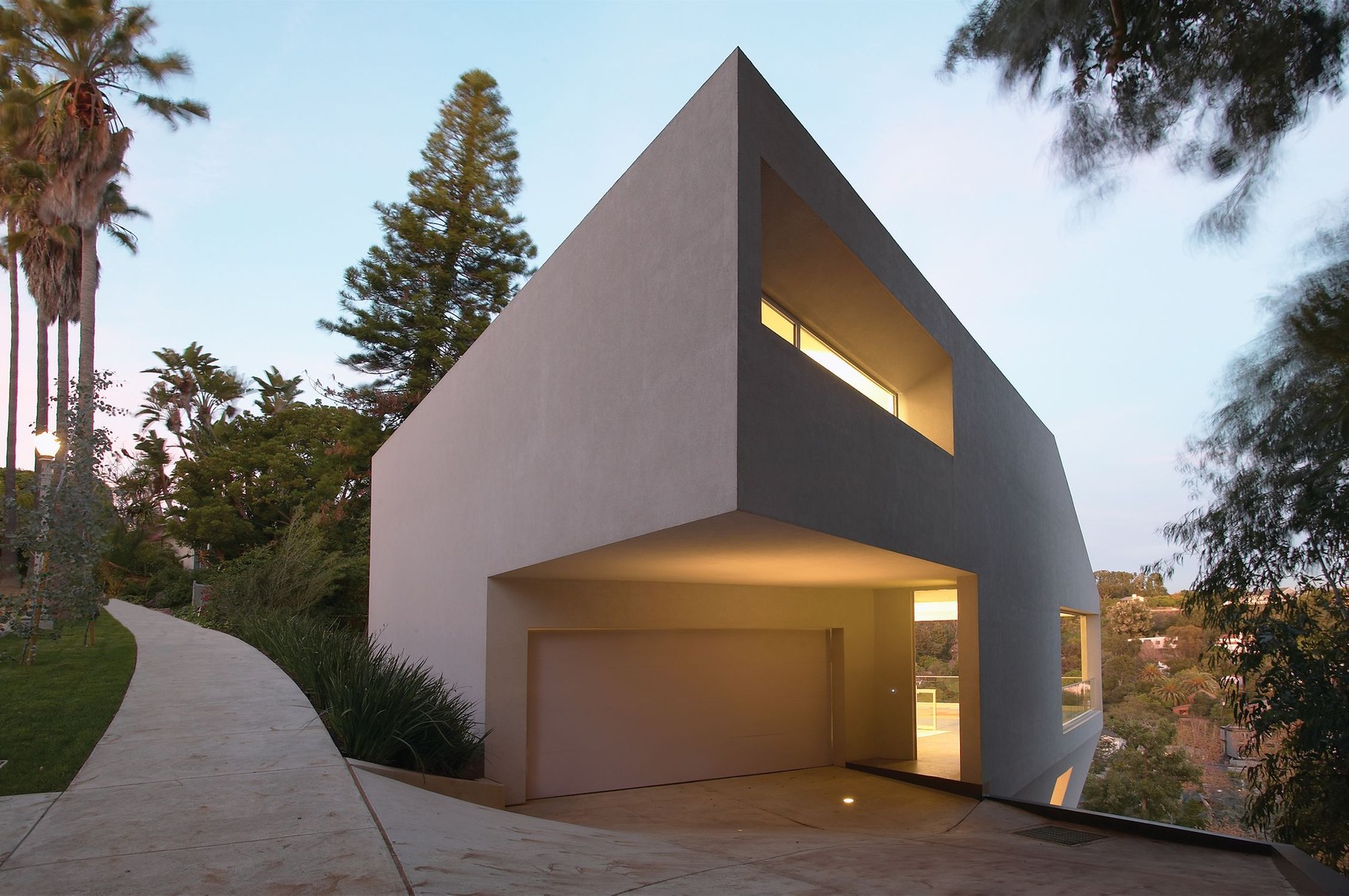 Their building wraps around tree-filled courtyards; it is clad in gray cedar under a white steel-plate roof. It sits alongside a pantheon of modern landmarks: a Renzo Piano building, Cy Twombly gallery, the Rothko Chapel, as well as the pre-war houses that the Menil family owned and preserved and painted gray.

Lee says they wanted their addition to impart a sense of “timelessness.” 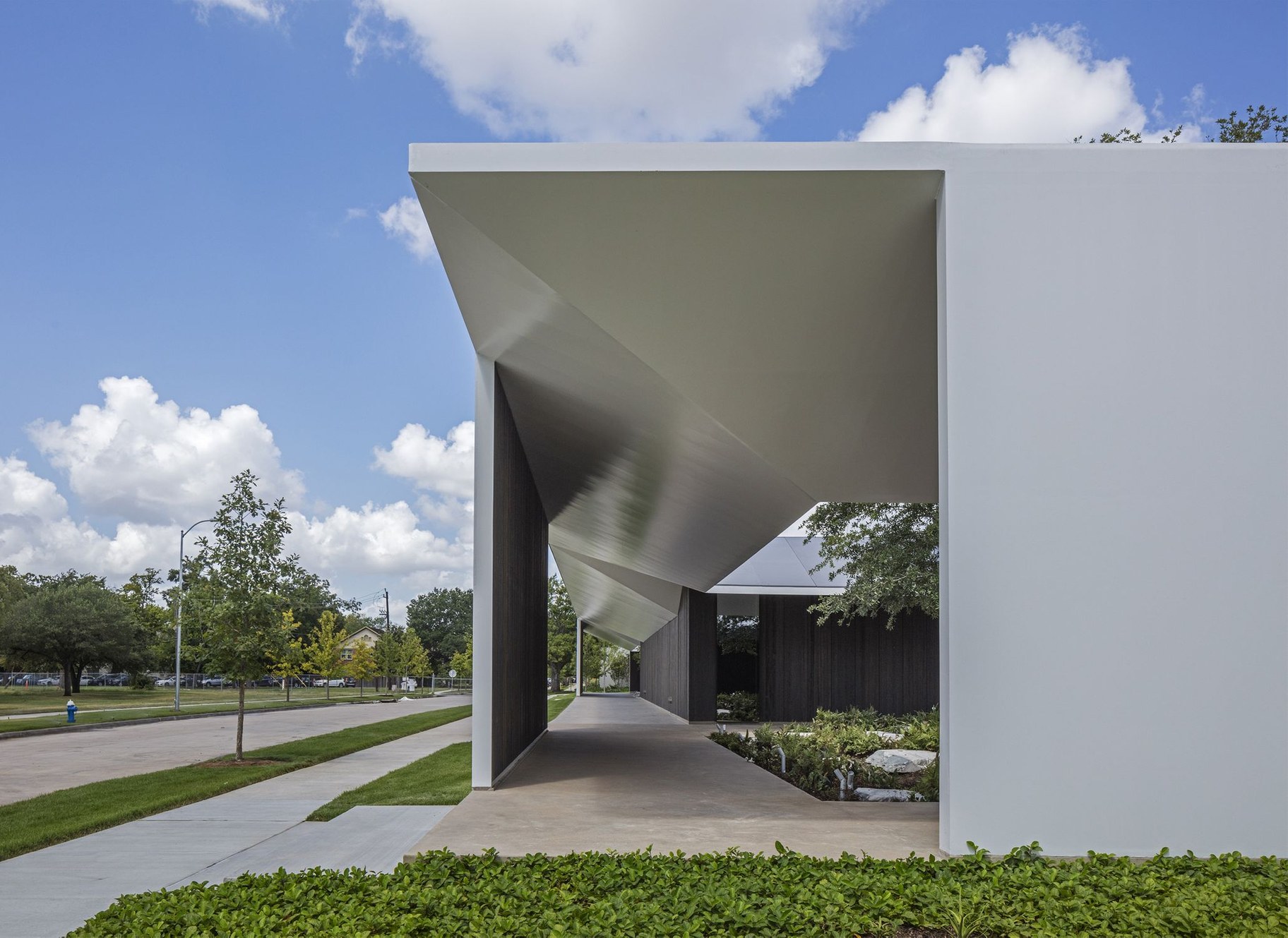 “I think for us, the thing that separates architecture from mere building is thinking about form, thinking about decoration, thinking about details. I think the areas that we focus on are often not the things that screams out for us, but I think after people pay more attention to it, I think those elements begins to emerge. If we are fashion designers, I think we won’t make a very crazy and loud lapel. But I think the fit will be very well, you know. So I think people could feel that there's something to it but couldn't put their finger on right away,” Lee said.

UCLA Margo Leavin Graduate Art Studios will be open (and free) to the public Wednesday, December 11, from 7 to 10 p.m., for a viewing of the MFA student work. Address: 3600 Hayden Avenue, Culver City, CA 90232.

It’s the season of gift giving, and while some gifts may become cherished heirlooms, others will likely wind up at Goodwill not long after the holidays. Then what happens to...