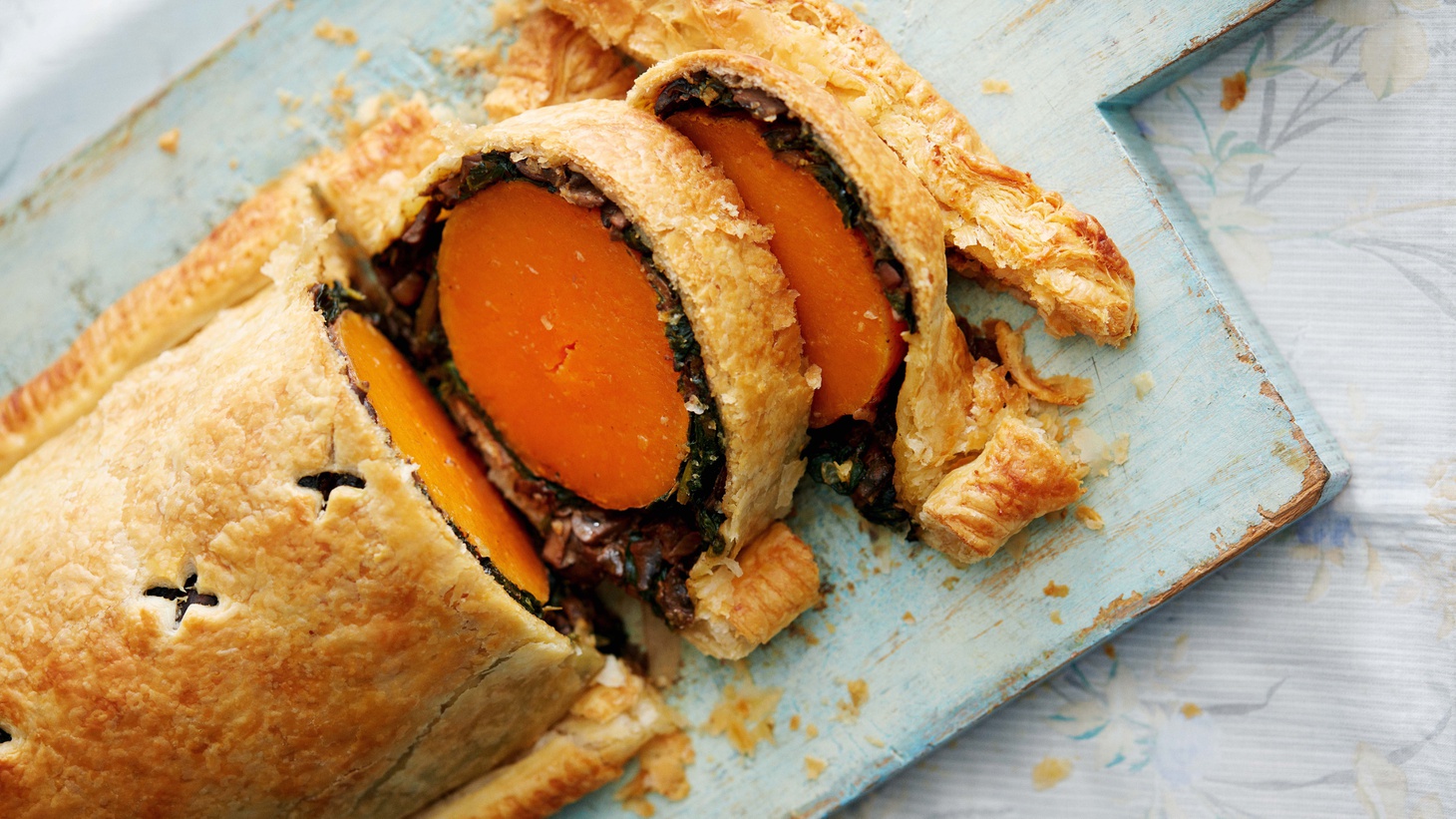 Putting a spin on an iconic dish, the McAnuff brothers’ jerk-spiced squash and callaloo wellington is a nod to their Jamaican heritage and London roots. Photo by Matt Russell.

Raised in South London by Jamaican parents, Craig and Shaun McAnuff have a large UK audience for their platform Original Flava. Recalling large family get-togethers with aunties, uncles, and cousins, food was always a focal point.

A trip back to Jamaica prompted the brothers to explore the Ital diet of the Rastafarians, including that of their herbalist uncle. In their second book “Natural Flava,” they change up common gateway dishes for vegetarians and vegans, including a plantain hummus and a jerk-spiced squash and callaloo wellington with nods to their Jamaican heritage and London roots.

KCRW: Tell us about the trip back to Jamaica that inspired you to broaden your palate.

Craig McAnuff: We went back to Jamaica for our “Original Flava” book, but also to see our family in Jamaica. We met with our uncle, who's a Rastafarian. He has his own land, he’s an herbalist who believes in sing the foods of the earth to help to replenish, to nurture, and also to eat. We're not actually vegans, we are “flexitarian” we like to say, but we wanted to showcase the amazing array of vegan palette that is in Caribbean food.

Hummus is such a popular vegan go-to, and can be made with so many different ingredients, but I’ve never seen plantain hummus, one of the recipes in your book.

Shaun McAnuff: It was something that we came up with a few years ago, actually. Basically you just add it to your chickpeas, blend it with salt and pepper, a bit of lime juice as well. The same way you do the normal hummus but you just add plantain to give it that sweetness and that flavor. … You can cook it down and you can fry it down. You can roast it, or you can put it in naturally as it is.

Craig: Even boiled as well. Quite easy. It helps it to get softer, so when you're putting it in a food processor, it's a lot easier to get smooth.

Shaun: It produces a more sweet taste as well when you boil it. 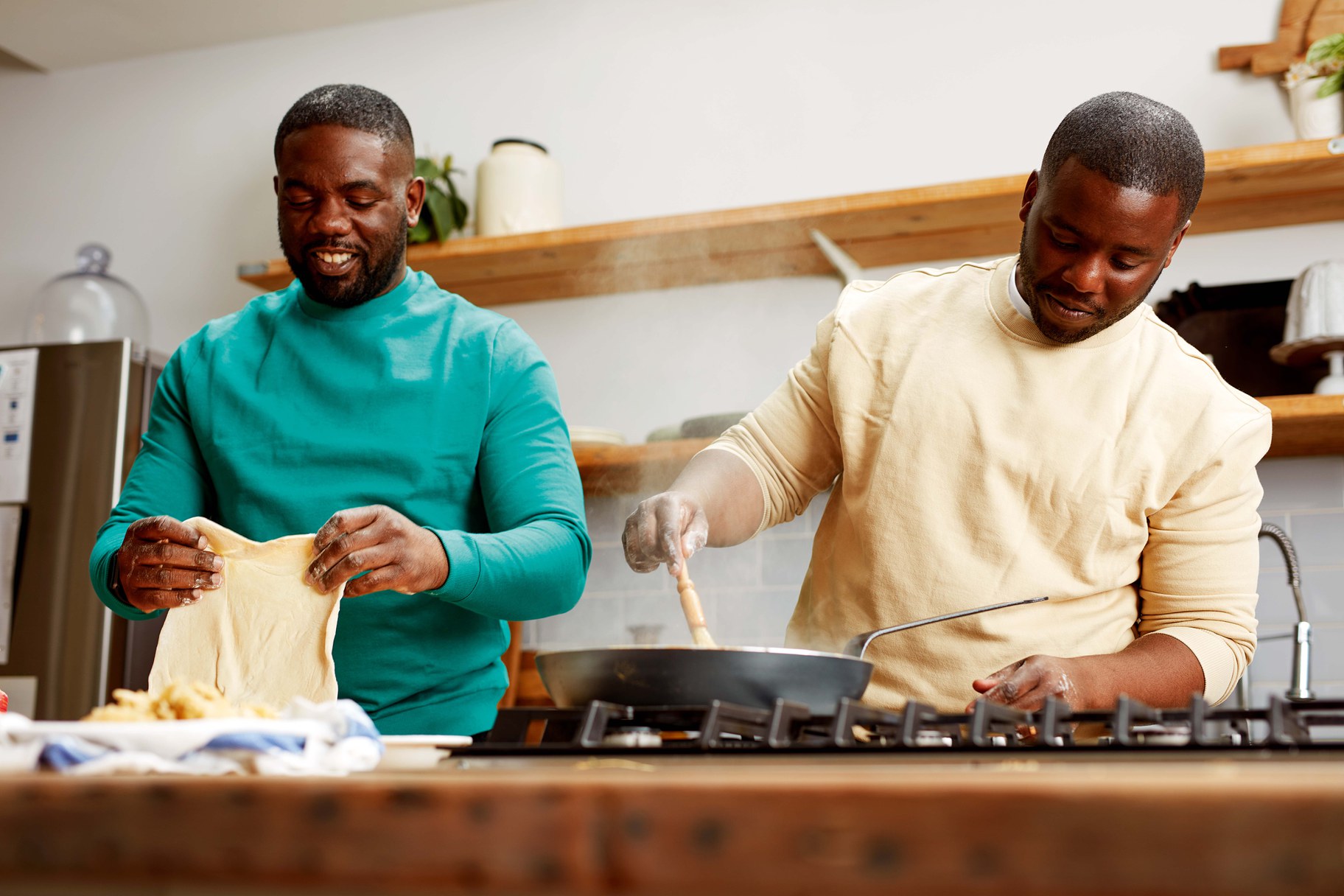 Can you describe your recipe for the curried chickpea plantain boat?

Craig: We're so used to using plantain and frying it in the Caribbean — slicing it up and putting it in some hot oil, lovely, golden, and crispy, beautiful side dish. But we just wanted to change it up a bit. So we roasted some plantain, or you can fry a whole plantain or roast in the oven [with] some oil on it. And then you make up a lovely chickpea curry and pour it over the whole plantain. So it's a bit similar to a banana sundae.

Shaun: Or a banana sundae. That split down the middle is very important, so it makes a divide in the middle of the plantain so you're able to insert the chickpeas on top so it just slots right in the middle.

When it comes to Jamaican dishes, most people think of jerk, and often associate it with meat. But you can jerk anything. Tell us about your recipe for jerk-spiced squash and callaloo wellington.

Craig: Wellington is really popular over here in the UK. And usually it's using beef as the filling. So we use a butternut squash, which has a very plump texture to it, very similar to a meaty texture, as well as very stringy. We used a jerk marinade and then we just massaged it onto the pumpkin or the squash. And then we added the callaloo to it and wrapped it with some pastry and it's just absolutely delicious. A real centerpiece on a vegan plate.

Shaun, what’s something from the book that you would really love us to try?

Shaun: The Ital stew. It's really amazing, really warm, hearty. It really fills you up as well. It’s one of the Rastafarian dishes that is quite a staple in Ital living.

Craig: It's got lentils in there, it's got pumpkin as well, [and] a lot of fresh vegetables. What we try to do with the base of it [is to cook down onions, garlic, celery, some tomatoes as well. And coconut milk. We have it with hard food, which is what we call it in Jamaica, which is green banana boiled with some yam, or some boiled dumpling, or fried plantain.

I was also intrigued by your Rasta pumpkin pasta.

Craig: That's one of my favorites. Because usually Rasta pasta for some reason has cheese in it. And we don't know any Rastas that eat cheese. So we created a natural type of cheese. For this one, we used pumpkin. We actually boiled up some diced pumpkin, and we simmered it down and added a little bit of coconut milk. And it produced a lovely, thick, stringy texture. We added that to some sauteed bell peppers, onions, and pasta and mixed it together. It's a lovely, refreshing dish. 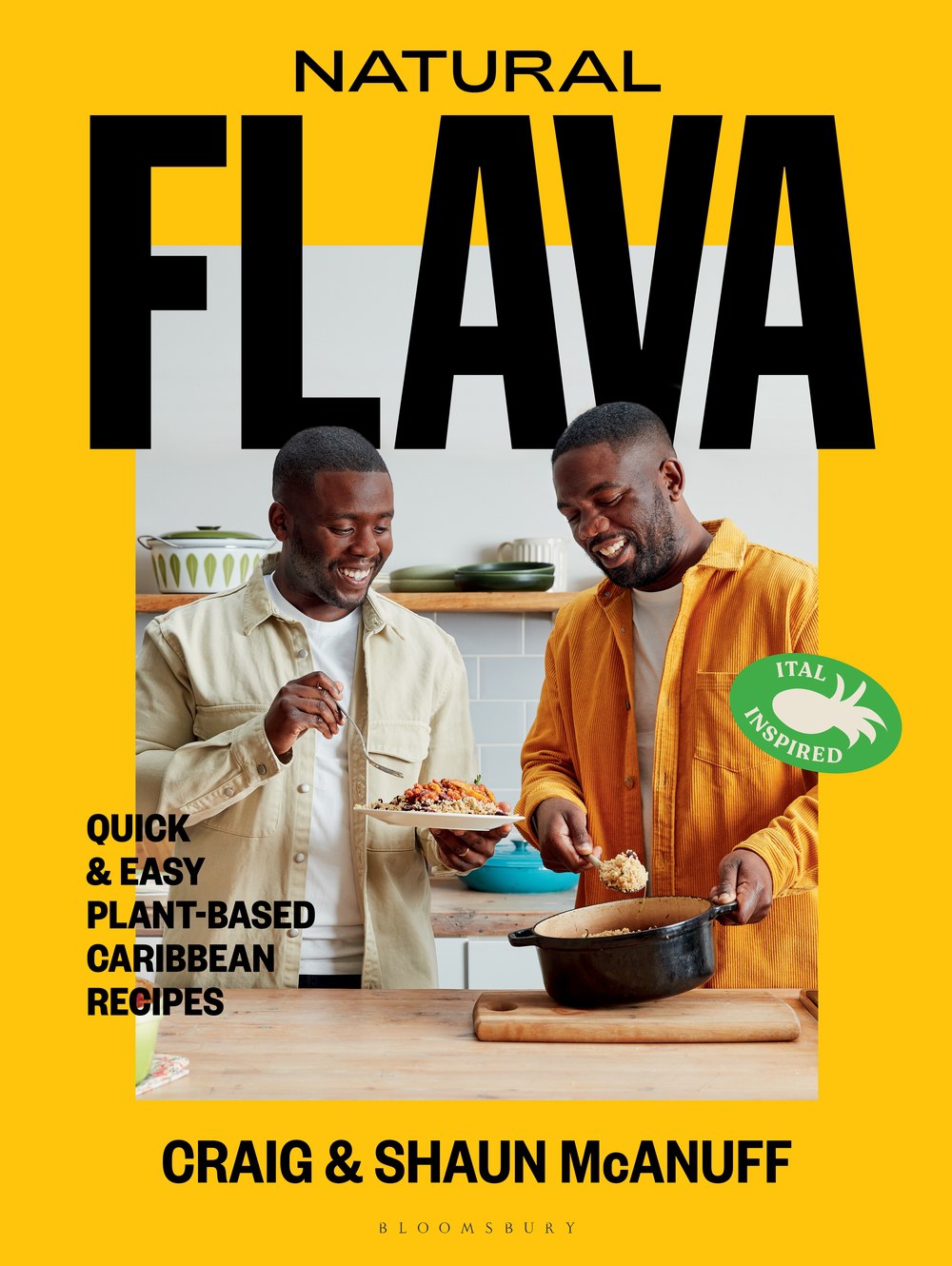 You have a recipe for eggplant, or aubergine, stuffed with spicy gungo peas. What are gungo peas?

Shaun: Gungo peas are quite similar to kidney beans [or] pigeon peas. It’s high in protein and fiber. You can get it in tins or you can get it dried, really accessible. And they're really tasty as well. It's such an easy dish to make.

What you need to do is split the aubergine in half. And you remove the flesh out of the aubergine over to the center pot. And then you cook it down with some gungo peas, some fresh tomatoes, from Scotch bonnet, some spices as well, in a lovely, rich sauce. And you roast the aubergines for about 20 minutes until it kind of shrivels up a bit. Then you add the topping on top with a bit of vegan cheese and put it back in the oven for five minutes. And the vegan cheese melts with the sauce and the gungo peas. It's really delicious. Just garnish it with a bit of parsley on top.

Vegan desserts can be difficult to do well. What is the trick to your yam and sweet potato cake?

Craig: It's naturally gluten free, where you're not using any flour. With the yam and the sweet potato, often in the Caribbean we have a soup potato pie. I know you guys have that in the States, but it's more of a side dish than a sweet dish in terms of a dessert. Over here in the Caribbean, they use sweet potatoes and they make it into a sweet cake. We just used that and added yam to it to make it extra fudgy, and then we added cocoa to it as well. Very similar to a lovely, thick fudge cake.