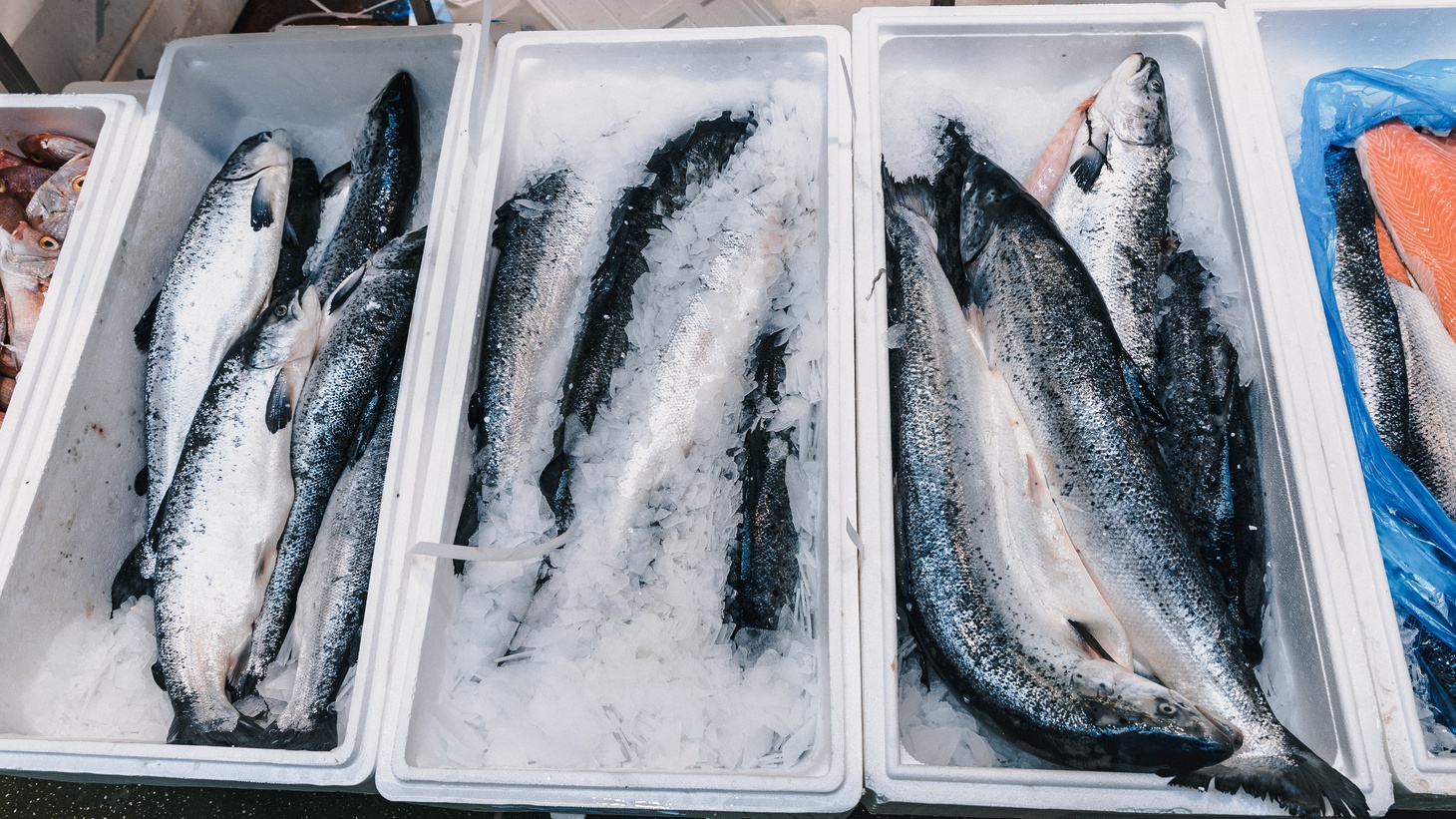 Salmon farming is a $20 billion industry, the fastest growing food production business in the world. Photo by Shutterstock.

In 2017, a salmon farm in Puget Sound began to fall apart because the nets hadn’t been cleaned. The nets were covered with mussels and seaweed, and more than 250,000 alien Atlantic salmon escaped into the waters of the Pacific and caused an environmental disaster. The event led to a movement by citizens and by legislators in Washington State to ban open net salmon farming in the waters. Today open-net salmon farming is banned on the west coast of the United States.

Farmed salmon is in every grocery store, and salmon aquaculture is the fastest-growing food production system in the world. In their book “Salmon Wars,” investigative journalists Douglas Frantz and Catherine Collins dive deep into salmon farming and found a world that is wholly unappetizing.

KCRW: What is a salmon farm? Are they akin to beef CAFOs (confined animal feeding operations) feedlots where cows are intensively raised?

Catherine Collins: That's a really good comparison to make. Imagine a floating feed bigger than a football field, anchored in a fragile cove where the waters are calm, often located on a wild salmon migration route. The farm will generally consist of 10 to 12 cages. They're also called pans, and they're made of tough plastic netting that is supposed to allow the ocean currents to flow through, while also keeping out predators. The cages are suspended by flotation devices and they extend 30 or 50 feet below the surface of the water, and each cage will hold up to 100,000 fish and a farm can contain as many as a million salmon.

The excrement, excess feed, and the chemical residue from a single farm can equal the waste produced by a small city of 65,000 people according to one study. But a city's waste is treated, while a salmon farm is allowed to dump its waste directly into the ocean, where it creates a toxic stew below the salmon farm that damages the seabed below, but also marine life for hundreds of yards beyond the farm. Some salmon spend up to two years crammed in cages where they’re prey to disease, and to parasites, and to climate change. 15-to-20% of those fish die each year before they can be harvested. 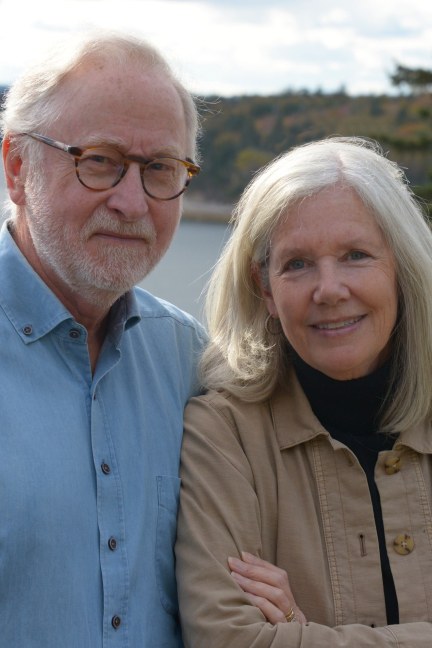 Is this the model that is mostly used for salmon farming throughout the world?

Douglas Frantz: Yes, it is. (Over the last 20 years) salmon farming has become a $20 billion global industry. It's controlled by a handful of multinational companies. And 90% of the salmon that we eat in the U.S. and Canada is grown in these fish farms. 70% of that is imported. These fish farms are almost identical worldwide.

We're told that salmon is one of the most healthy protein choices we can make. Is that actually true?

Collins: I think consumers should be wary about eating farmed salmon. When you read the salmon packaging, it often boasts that the fish is organic, sustainable, and naturally-raised. But the reality is disturbingly different. Science warns that the residue from pesticides, antibiotics, PCBs, and farmed salmon pose risks to our health, especially if you're pregnant, or if you're an infant or a child. These risks were identified decades ago, but the industry has done very little to eliminate the dangers. 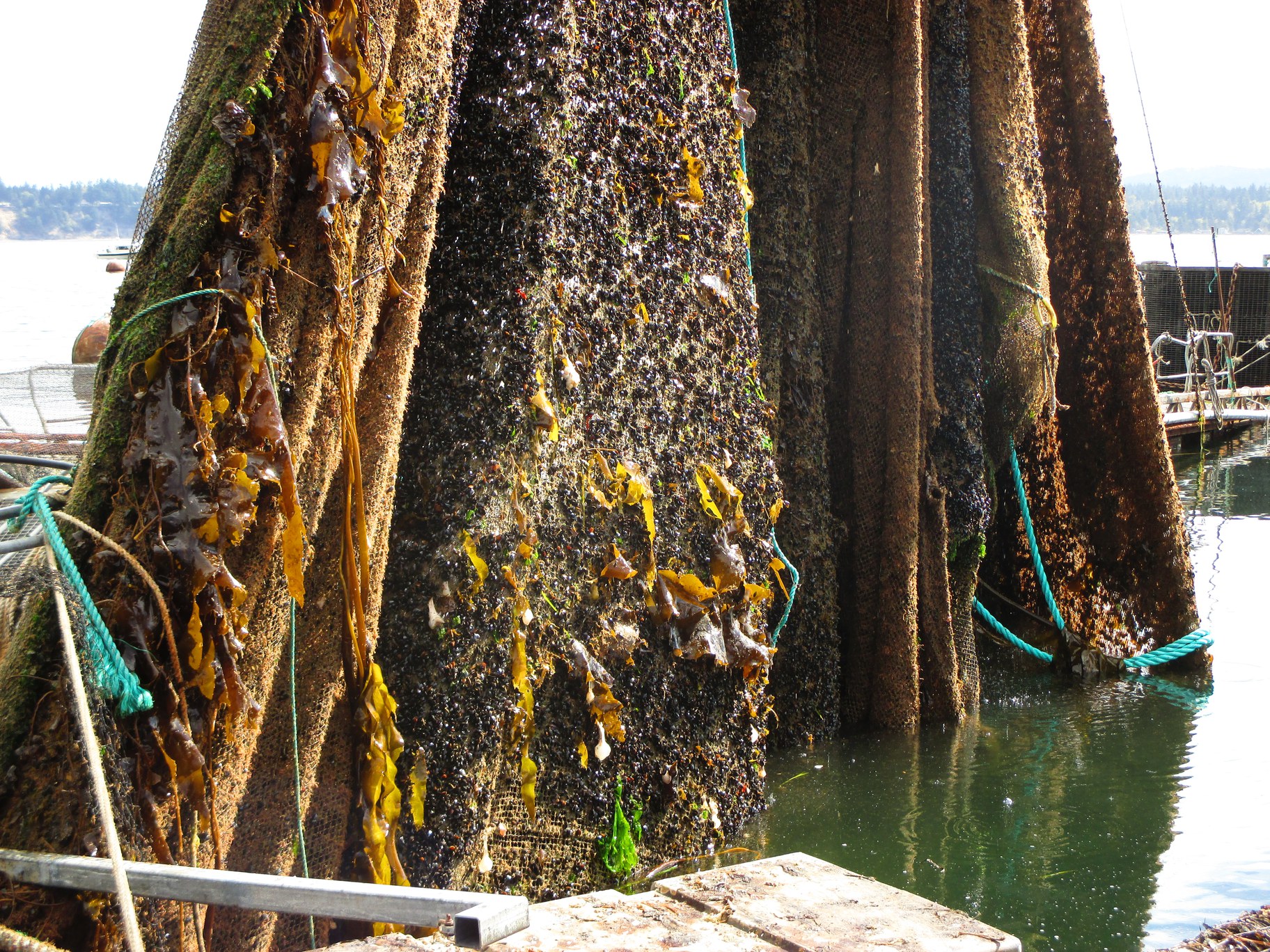 Covered with mussels and kelp, the current couldn’t pass through uncleaned nets and pushed the farm off its moorings. Photo courtesy of Catherine Collins.

When I think about this particular sector, it seems to be a place where scientific curiosity, combined with a lack of regulation and greed, have come together to produce a juggernaut that is very similar to big tobacco.

Frantz: We did find some parallels with big tobacco, as well as with big agriculture, and the auto industry. Science doesn't say that eating farmed salmon is as dangerous to your health as smoking. However, there are similarities. And the chief similarity is that for years, the tobacco industry suppressed science about the link between smoking and cancer. In the same way, the salmon farming industry has suppressed critical studies about the contaminants found in farmed Atlantic salmon. 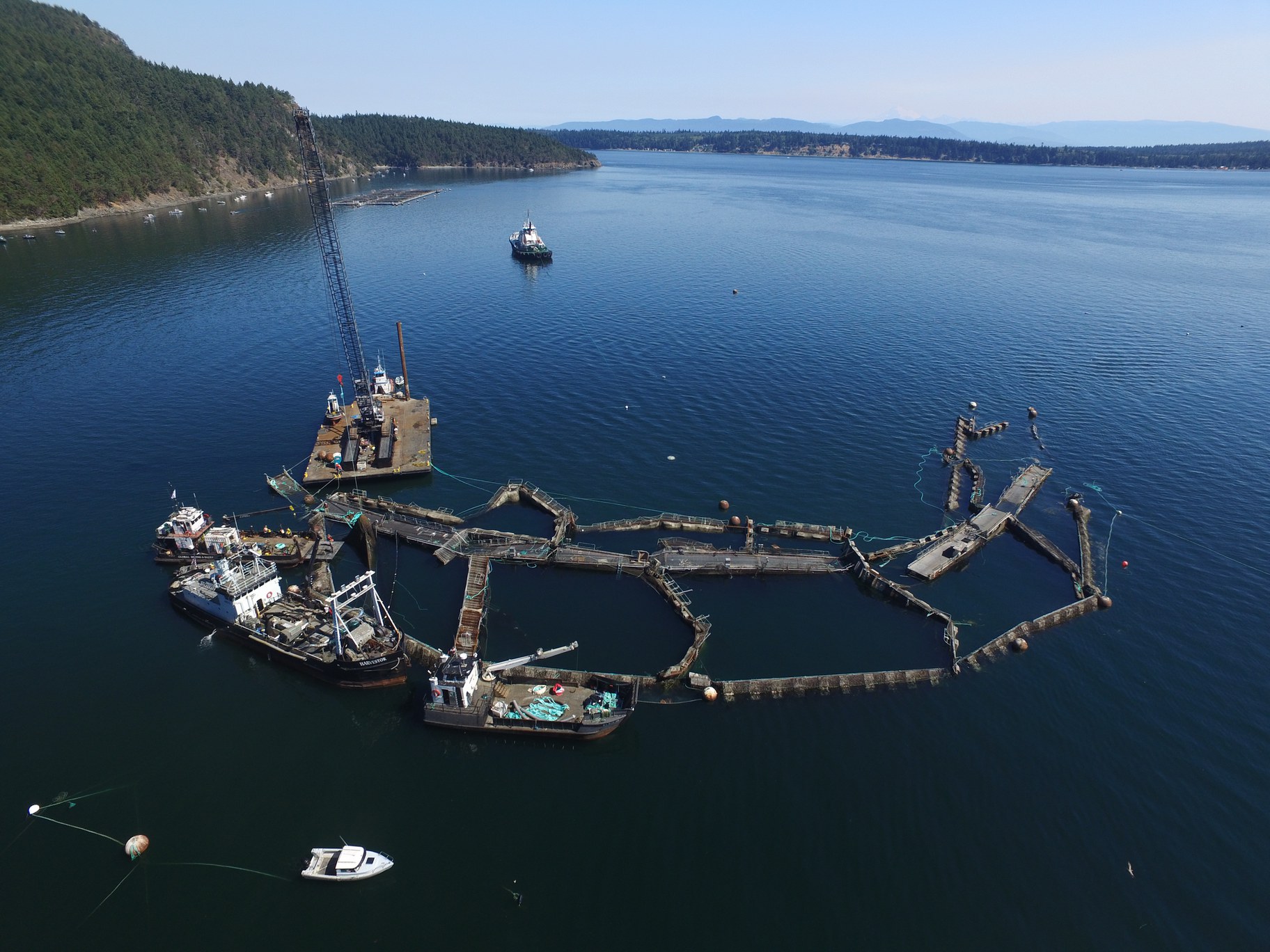 When the nets collapsed at Cooke Aquaculture in the Puget Sound in Washington State, over 250,000 alien Atlantic salmon escaped into the waters of Pacific salmon, causing an environmental disaster and ultimately leading to a ban of open net salmon farms on this coast. Photo courtesy of Catherine Collins.

In 2004, there was a study in Science Magazine which said that farmed Atlantic salmon contain seven times the PCBs of wild salmon. PCBs are a carcinogen and they accumulate in your body over time. The flesh of this fish is pink – how do they get it that pink? Think of going to the paint store where you can look at colors of paint chips – they have something [like that] for the salmon industry called a Salmofan. It has a similar range of colors, and you can use certain amounts of dye to get your salmon exactly the color that you want.

Labeling and marketing has been an ongoing issue in the seafood industry. What responsibility falls on the government for ensuring public safety?

Collins: We think the government has an enormous responsibility with regard to this particular subject, and overall for food safety. Three years ago, the FDA inspected only 89 samples of 379,000 tons of imported fish. They have to do a better job. They do a much better job with other products than they do with seafood. 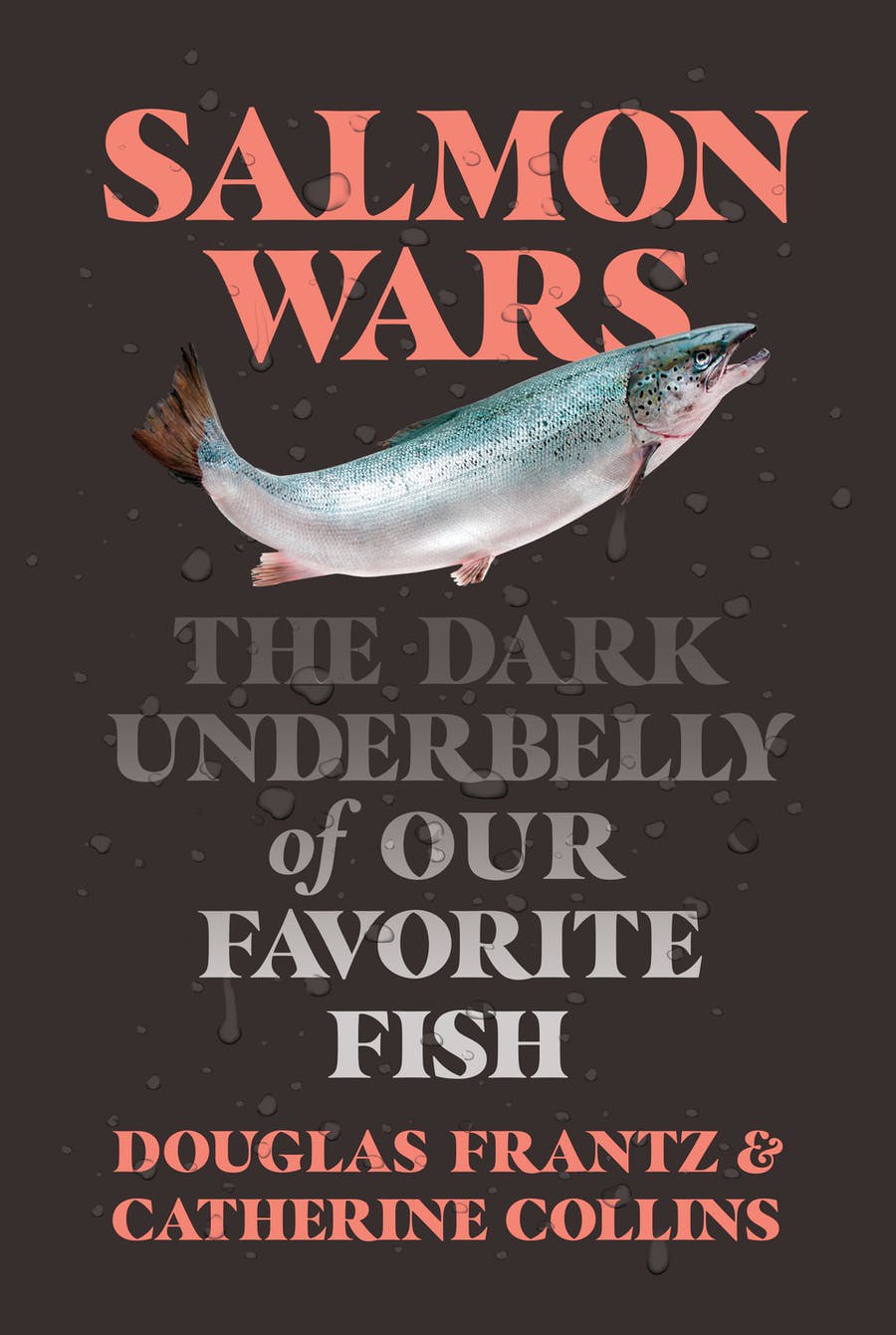 “The excrement, excess feed, and the chemical residue from a single [fish] farm can equal the waste produced by a small city of 65,000 people according to one study,” says Catherine Collins. Photo courtesy of Macmillan.