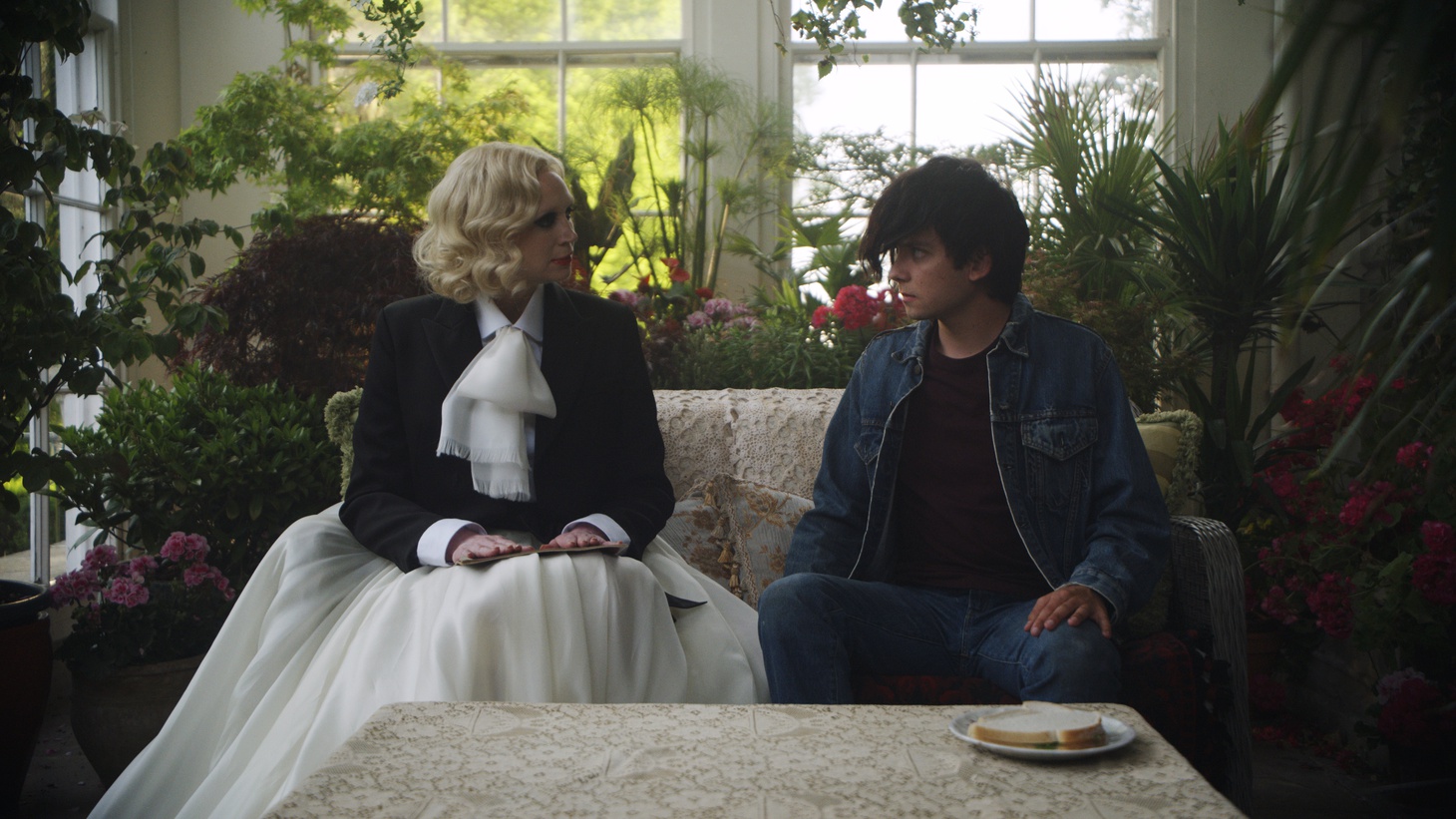 Peter Strickland’s film “Flux Gourmet” follows an unnamed artistic collective led during a residency at an institute devoted to culinary and alimentary performance. Imagine a world almost like our own, but not quite – where the practice of extracting sound from food is your perspective artistic discipline. Spectators show up at galleries to watch sonic caterers capture the audio of overflowing blenders, sizzling frying pans, and microphones plunged into pudding. The dark comedy has a critic’s score of 85% on Rotten Tomatoes.

This interview had been edited for length and clarity.

KCRW: This concept of sonic catering is so fabulous and far out. How did you come up with it? And why does it feel so deviant?

Peter Strickland: I was in a band that did that. We started in 1996. I think it was just a basic surrealist notion of taking something very ordinary for people in the Western world and putting it in a different context. And suddenly it forces you to listen. We were not really performing with food, we were just documenting it. And I think we were heightening it with certain sound effects. But in the film, there’s more mixed in with this brutal actionist performance that you would associate with people in Vienna in the 1960s, like Otto Muehl and Hermann Nitsch. We’re dealing with meat a lot more, even though it was just a vegetarian band. I guess that's where the deviant element comes in. And obviously, that's connected to bodily fluids and so on.

I was one of those children that couldn't watch a horror movie because of the sound. What intrigues you about sound, given that you're in this visual medium?

The more restricted your perspective is when it comes to your senses, the more your imagination compensates. So in a way I feel sight is the laziest sense, because everything is just done for you. I think smell is the most evocative sense – memories just come flooding back with smell. Sound is pretty close to that. As you mentioned, when watching horror films, I was the same – I remember seeing “The Omen” when I was too young to see it, and it was the music that just completely destroyed me. I think sound can really deceive. You can play tricks on the mind. It can work against image, which I find quite interesting. And it just expresses a whole state of mind, which images can't always do.

I understand that a lot of the film sound design came from your own performances and then you added new material on top of that. Can you describe how the audio for the sonic kitchen band that we see in the movie was created?

We use the same recipes in the film. Between the three of us – Tim Kirby, Colin Fletcher and I – I would do the cooking, and Tim and Colin would run it live. Pretty much the same effects as what you see in the film. Most of that gear is theirs – the copycat, tape delay, the reel to reel. We did very long sessions, like 20-minute sessions roughly, and we would edit them down. You chop them up, you layer them, you kind of treat them like food, really. We were interested with this band to treat sound the same way you treat food and use the recipe as a score.

What were some of the dishes that you made?

We’re very simple. We’re not going to win any awards. One was a tomato soup. Another was an omelet. But when we do this, we have to think about what makes the best sound. Sometimes more advanced dishes don't quite work. So we try to think of sounds that involve blender sounds, or sizzling, frying, and boiling. 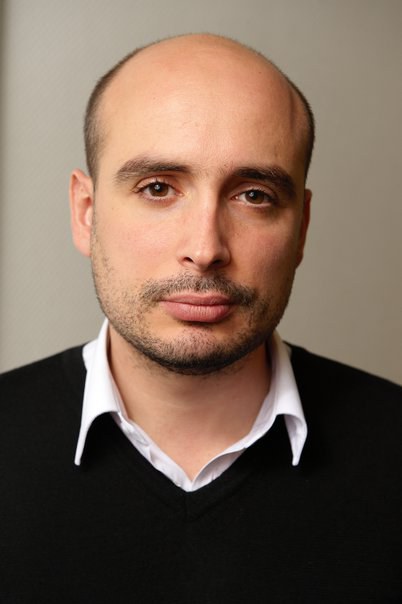 “The more restricted your perspective is when it comes to your senses, the more your imagination compensates. In a way I find sight is the laziest sense,” says filmmaker Peter Strickland. Photo courtesy of Daniel Gasenzer.

While there is a lot of dark humor in “Flux Gourmet,” the main characters all take their work just extremely seriously. Especially Elle di Elle. She's controlling, manipulative, cruel, and pretty toxic. What drives her? She's so why is she so intent on being a scion in this niche field?

I just like antiheroes –  watching De Niro in “Taxi Driver” and being kind of drawn to these deeply flawed characters. You might not want to know them in real life, but in a film, they're quite mercurial. It was interesting for me to look at ego, and to look at the power dynamics within a band. And, the idea of exploitation, where she's taking someone's very serious stomach issues and piggybacking from that, and using that for her work. 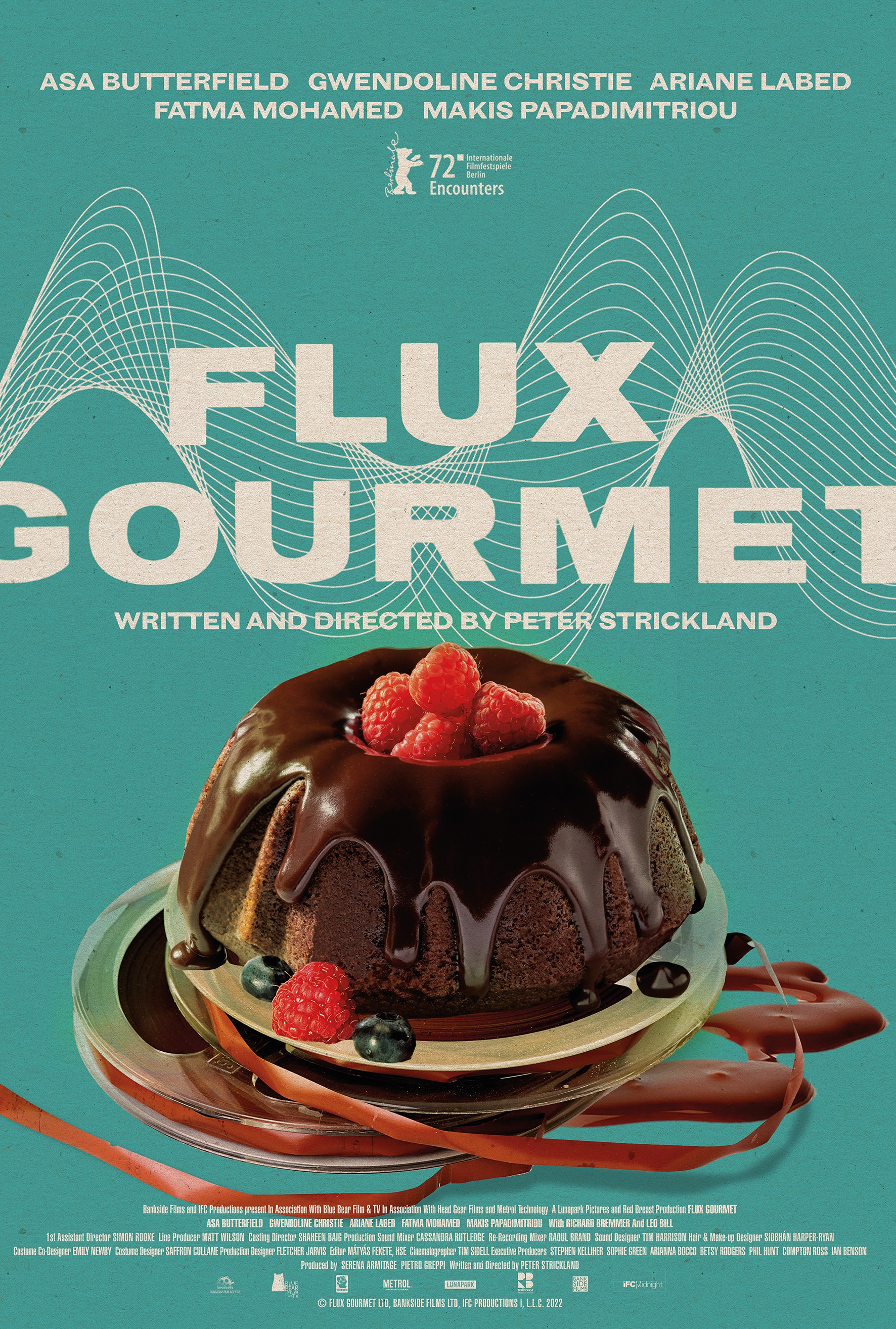 A sonic collective devotes themselves to a culinary and alimentary performance in Peter Strickland’s black comedy “Flux Gourmet.” Photo courtesy of IFC Midnight.

You're referring to the character Stones, a journalist who's been hired to document this artistic collective, and through most of the film, he's suffering with intense digestive discomfort and all the embarrassment that comes with that. Some of his diagnostic procedures end up being part of Elle di Elle’s performance. Why did you make this such a prominent storyline?

I just thought it wasn't being done in film. It might have been in something but I'm just not aware of it. When I've seen stomach issues done, they've always been done with comedy. But I wanted to look at something with more of a compassionate perspective, because it's so common now, we're talking about two different things. One is auto immune issues, and then one is allergies. And the idea of humor comes up in both when it's revealed that Elle’s character laughed at someone having anaphylaxis, which of course, is no joke, but that's often presented as a joke. It kind of ties in with the film – the idea of digestion, the idea of taboo and shock value, and the function of that in arts, but also just a nightmarish scenario. I think a colonoscopy is bad enough, but to have it in front of an audience is a nightmare.

What are you working on next? Do you have any plans to return to the world of food?

I do. I wouldn't call it a sequel, but I'm doing a film about celiac disease, post-diagnosis – so the symptoms are a thing of the past. It's more about the social side of having a condition, especially when you're young, where fitting in is so important, like everyone having that birthday cake that you can't have. It’s like a fairy tale for kids. So “Flux Gourmet” was pre-diagnosis for adults. This next film is post-diagnosis for kids. It’s my first, and probably only kid’s film.