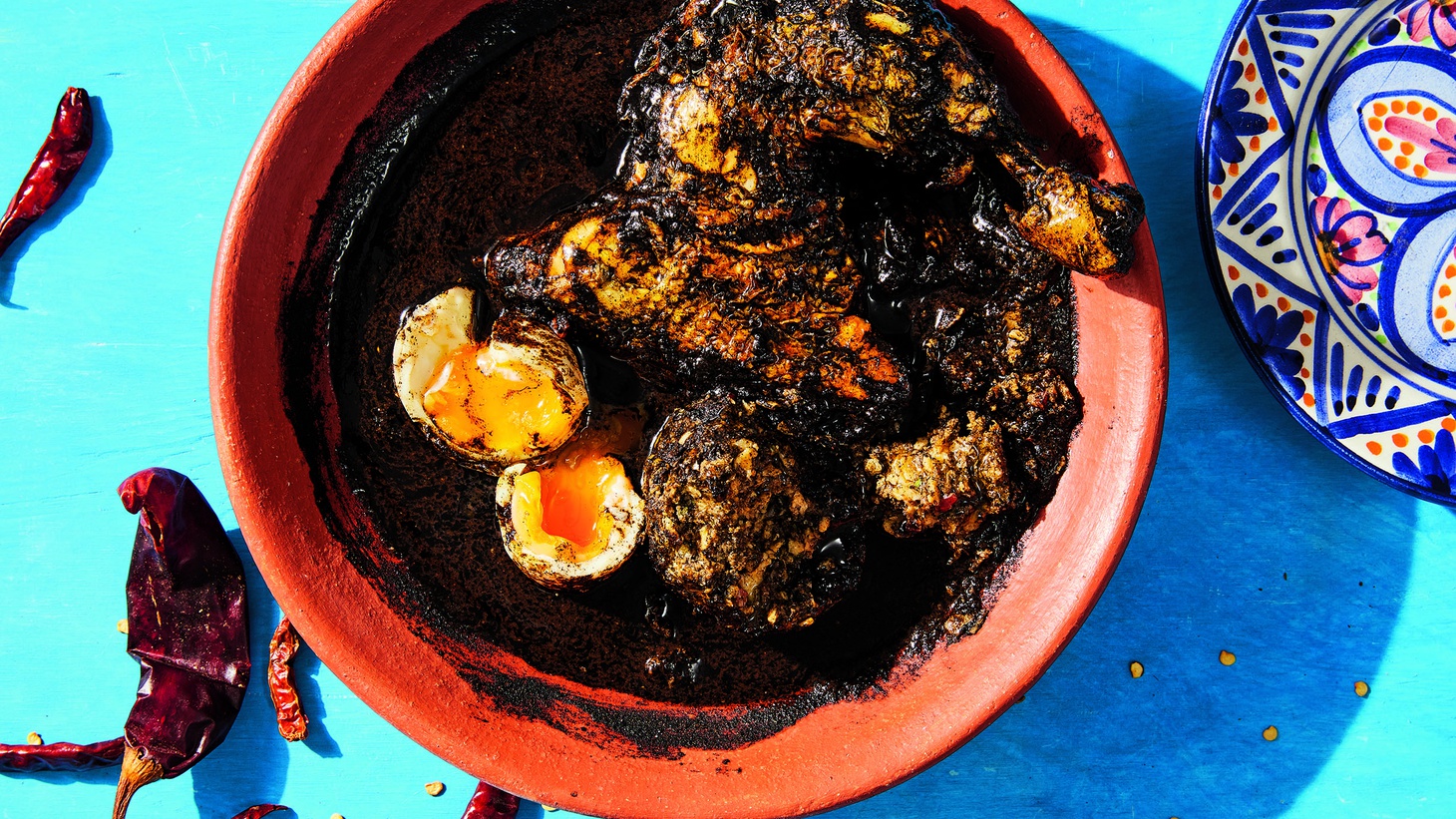 Rick Martínez recalls the first time he tried relleno negro, a dish from Yucatan, at a taco stand where he was intrigued by the smell and deep color. Photo by Ren Fuller.

As a boy growing up in Austin, Texas, Rick Martínez recalls watching food television with his mother and seeing the likes of Diana Kennedy and Rick Bayless speak with authority about the cuisine of Mexico. Inspired to connect with his roots, Rick now lives in Mazatlan and explores his cultural heritage in his cookbook, the recent New York Times bestseller “Mi Cocina: Recipes and Rapture from My Kitchen in Mexico.”

KCRW: Tell us about the impact that Diana Kennedy had on your young self. You admired her, but was it strange to see a British woman representing Mexico when you were a young boy in Austin, Texas?

Rick Martínez: It was really strange. I didn't really understand that she clearly had a knowledge that not many other people who were known in the United States had. Certainly she was probably the most prominent voice of Mexican culture and cuisine, first above Rick Bayless, who also was an authority in Mexican culture and cuisine. But to a brown Mexican American boy growing up in Texas, it seems strange to me that a British woman and a white man from Oklahoma were the authorities and were telling me about my culture and the cuisine.

My mother and I would watch her show in particular, and there was an episode where she was making chorizo rojo el verde. I loved what she was doing. She was going to the markets and talking to the purveyors, and seeing these chorizos hanging in the mercados was so incredible to me. But I didn't understand why she got to do this.

It seemed to me that there had to be a Mexican or a Mexican American chef somewhere that could be explaining this. I respected her and I learned a lot from her. But I also had a resentment towards her because of that. And I decided as a teenager that I wanted to be her. I wanted to be the one to teach other people about Mexican cuisine and culture. I think there's so many amazing things that are happening both in Mexico and in the United States, relative to Mexican and Mexican American immigrant cooks, that I think those are the people who should be celebrated.

Let's talk about the book’s exploration of Mexico and your roots, starting in the capital Mexico City with a dish you love. Could you talk about gaspacho moreliano?

It's such a beautiful dish. I had a very strong perception of what gaspacho is. And I think most people, at least in the United States, know what that is and have a very clear idea that it’s a Spanish soup.

In this particular town, it is spelled with an “s” not a “z,” and it is basically a fruit salad. There's a street that probably has about 20 vendors, and each of the vendors sells their variation of this fruit salad. It's typically made with mango, pineapple, and jicama. These very young cooks, with very sharp knives, are very talented and are very quickly chopping this fruit into perfectly tiny little cubes.

They toss them together with lime juice and chili and put them in these tall glasses. They top it with cheese, chamoy crema, and more crushed chili, and then people around the streets just walk around eating this gaspacho. It's such a great accompaniment to grilled meats and fishes, or anything that has a char-y flavor. It acts as a really great acidic and sweet counterpoint to a lot of foods. 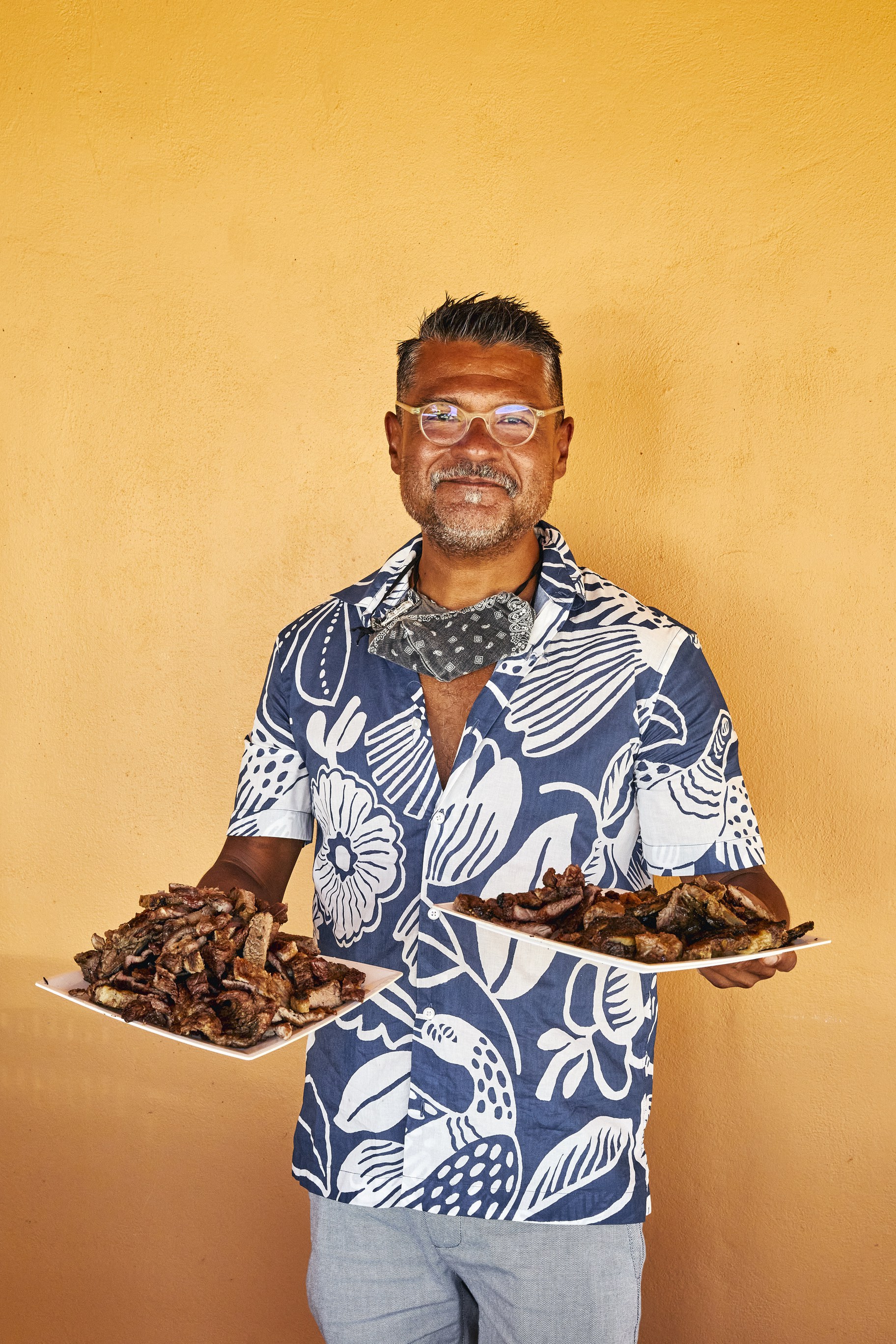 Growing up in Austin, Texas, Rick Martínez recalls watching Diana Kennedy on television, not understanding why a white, British woman was speaking about food from his heritage with authority. Photo by Ren Fuller.

Tell me about the dish from the Veracruz mountains called uliche.

It's such a beautiful, comforting dish. I think that for a lot of fans of Mexican food, you probably are aware of mole, and you might even be aware of mole poblano versus the moles in Oaxaca. But I think what you may not know is that a white mole blanca exists, and it's called uliche.

The base is actually fresh chilies and corn masa. It's such a classic and important flavor combination in all of Mexican cuisine, but the fact that it exists in this beautiful, velvety sauce is really incredible. Relative to some of the other more complex moles, it's a really easy mole to make. … I've served it with roasted chilies and stewed chicken. To me, it reminds me of chicken and dumplings, [which] are something that I grew up with in Texas that my mom made. It's creamy. It's chickeny. It's a really beautiful cold-weather comfort dish. And the uliche really speaks to me in that same way.

Tell me about the Yucatan’s relleno negro.

I had a friend who was a chef at a resort in the Yucatan. And I basically told him, “I definitely want to eat your food, but I would really like to try some taco stands out in the middle of nowhere that are much more homey.” To me that food is much more real, because the people that are making it are making it because they love that food. And they know that they're good at it. They're not making it to please a tourist. They're making it because of a genuine love and desire to make that food for other people.

He took me down a highway and we stopped at this little taco stand seemingly in the middle of nowhere, and there was nothing else around. I walked up and there was this bubbling tray of black sauce. And I was just so intrigued. I’d never seen anything like that. It didn't look like a mole, it actually just looked almost like charcoal. But the smell was incredible. I could smell the spices, I could smell the chiles, and then I could smell turkey. And I love turkey. Imagine Thanksgiving turkey but with vegetables simmering in a soup, and lots of chiles and spices, but then this really interesting note of fire and char. And I was so intrigued, I had to have that even after I ate it. And I absolutely loved this dish. I didn't understand how something that was so intensely black could be that flavorful and not bitter or acrid.

It is this really amazing process that the Mayans created to not only char or incinerate the ingredients in this dish, but then to somehow remove all of those really harsh flavors and reconstitute those ingredients so that they retain their original flavor, but with this really nice smoky flavor. It's an incredible dish. And it's very striking. I put it as a spread in the book because it is such a beautiful and unusual dish when you first come across it.

What role has immigration to Mexico played in the country's regional cuisines?

Were it not for the migration of people, whether they immigrated willingly or not, whether they were conquerors or they were escaping some harsh reality in their country of origin, those people created the cuisine of Mexico.

I view Mexican cuisine as layers – you have the Indigenous people that were here before anybody else came, and then each wave of migration created this new layer of flavor that just kept building and building. I think tacos al pastor is a great example of that. You had Lebanese and Iraqi immigrants come to the country. They brought with them the technique of making shawarma, and they brought with them the trompo, or the spit. Mexicans really like pork, so they swapped out the meat and started using pork. They started integrating other Indigenous flavors like the dried chilies and the achiote. And then all of a sudden, you have this incredible fusion of cultures and flavors. And less than 100 years later, it is an iconic Mexican dish.

Years ago, when I tried relleno negro for the first time, I was at a taco stand on the side of the highway between Cancun and Tulum. There was a cazuela full of this incredibly fragrant guiso bubbling away over an open fire. It was jet black, which made me think it might be mole, but it looked too thin. The guiso had shredded turkey and broken-up pork meatballs, but at the time, I had no idea what it was—I just knew it smelled incredible, like a smoked turkey but with the fragrance of toasted chiles, and I had to try it. It came in a taco and was so amazing (and a little bit messy). The shredded turkey and broken meatballs held onto the broth, but after the first bite it was dripping down my chin. The friend who I was with saw how much I liked it, and just before I had to go back to New York, he gave me a bag of recado negro (a concentrated black spice paste similar to a curry paste used to make sauces and soups) to take home with me so that I could re-create the experience back in New York. Note that you need to start this dish at least the day before you plan on serving it. 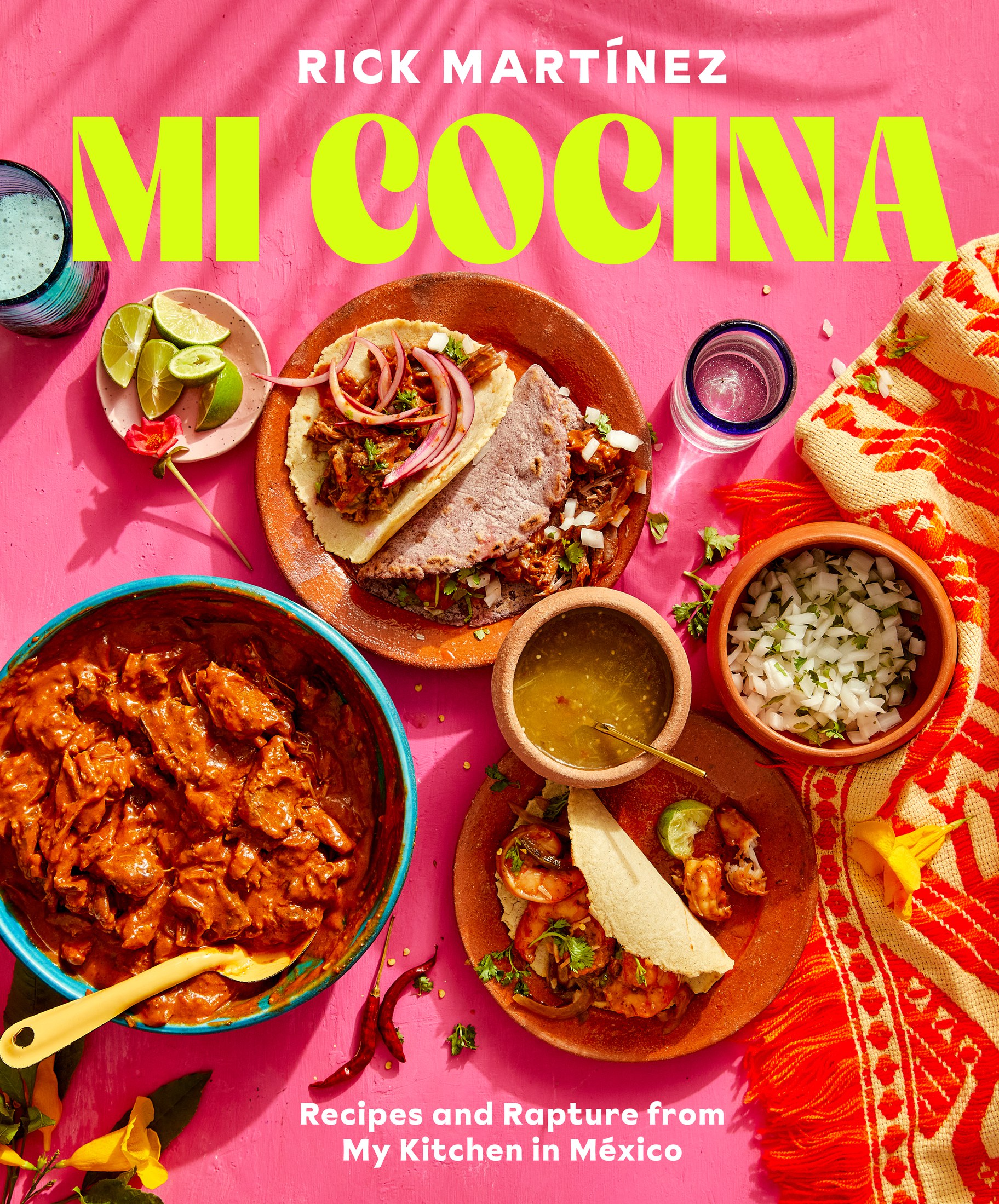 “Mi Cocina: Recipes and Rapture From My Kitchen in México” is the culmination of Rick Martínez’s travels through Mexico to explore his roots. Photo courtesy of Clarkson Potter.