There ain't no party like a pancake party — just ask Curtis Kimball, after his wife told him that he “was getting weird” and needed to make a few more friends. Rather than join a local club or seek out groups on social media, Kimball flyered his Bernal Heights neighborhood in San Francisco inviting neighbors to a flapjack fete — prepped and served by Kimball — on the driveway of his home. What were the results? Let's just say we were worried he'd be too busy to take our call.

KCRW: Take us through the conversation that sparked this idea of sidewalk pancakes.

Curtis Kimball: I'd had friends that had moved away during the pandemic, and my wife and I had considered moving away. My plan was, if we moved away, I was going to figure out how to meet people. And I thought I would just make pancakes. We ended up staying in San Francisco, and I still felt like I needed more community in my life. And I thought, “I don't really know how to do much. But I think if I just give people food, they'll probably talk to me and hang out. And maybe I'll make friends.”

You're kind of used to long lines for treats. You used to own a food truck, The Crème Brûlée Cart, correct?

Yeah, I was used to long lines early on in that venture, which was similar in that I was kind of getting out there with people and trying to do something outside and whimsical and surprising. But I think the pancake situation had a little bit more power or connection to people, just because it's not really a business. It's not really anything. It's just making pancakes and hanging out.

San Francisco isn't known for especially expansive sidewalks or large front lawns. What did it first look like when you started doing this?

The first one I did, I just got two folding tables. I bought them at Home Depot, and got one electric griddle that my wife had gotten from a Buy Nothing group. They loaned it to us. And I just strung an extension cord from my house across the sidewalk, put my back against the street, and just started making pancakes.

How did you get the word out that this was gonna happen? Or did you just do it guerilla style?

No, the first time I was concerned that not enough people would come if I just did it guerilla style. And I was also concerned that maybe people would just walk by and not understand that it was open for anybody. So I used my incredible Instagram story graphic design skills and had some flyers printed up. And then I just started nervously posting them around the neighborhood. I got a little nervous hanging up the flyers because the idea in my head was just an idea and kind of safe. But once you start putting yourself out there, it's a little bit more vulnerable. Maybe that's what people respond to. 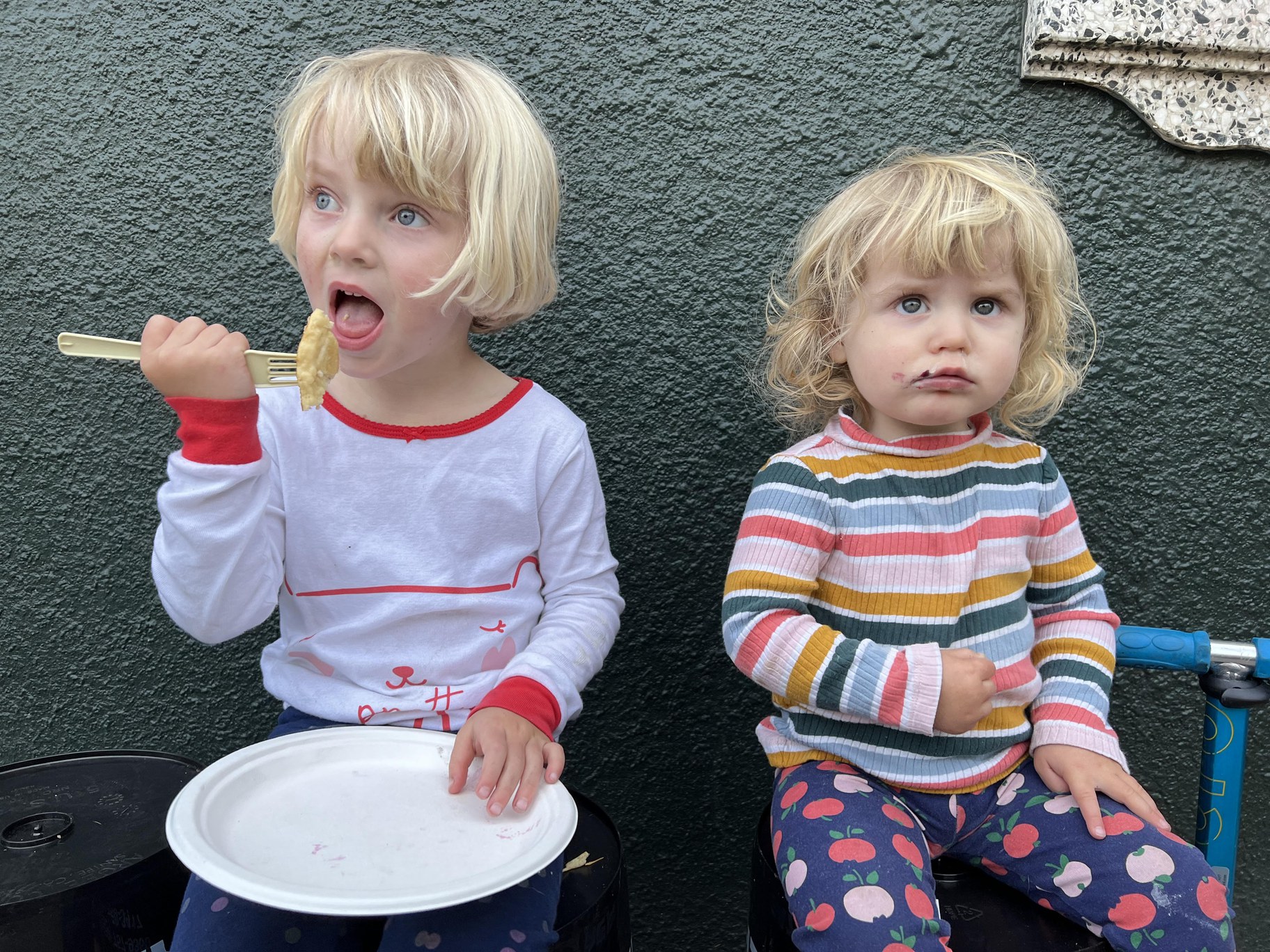 What was the response the first time?

The first time, I set up and I was super nervous. Immediately, two neighbors from maybe three doors down came and I was like, “Do you want some pancakes?” And they're like, “We're here for the pancakes!” And then people just started coming in. It was really one of the best days I've had in a very long time, because every person came mostly from the flyers and they just were really excited to see what this was. Like, is there really going to be a guy just making pancakes to make friends? It sounds a little bit out there.

Did you get adopted by some people at that first gathering who helped you in subsequent iterations?

There were people that showed up to the event with stuff. Somebody brought lemon curd, somebody brought honey from bees, I guess they were beekeeping a few blocks away. The people just kind of participated that way. The second one, it had gotten a lot more media coverage. And so I was concerned that I would be overwhelmed. My mother in law was in town, so she helped out with flipping. My father in law would run batter from the house out to us. And one of my old employees from The Crème Brûlée Cart, a really good guy named Dylan, I said I needed help, and he's like, “I'll be there.” I think that was the earliest he'd ever been up. But he came nonetheless.

Did people want to pay you to help defray your expenses?

They did. The first time, I wasn't really into it. The second time, my concern was like, “Is my wife ever gonna let me do this again if I keep spending hundreds and hundreds of dollars on pancakes?” And people were asking for a place to donate. It didn't feel right at the time, because it wasn't intended as an exchange. It was intended as a just, “Accept my pancakes from the bottom of my heart.” But I did end up setting up a GoFundMe, and we raised enough to carry us on through a few more pancake parties for sure.

Were you nervous that people would like you pancakes? Or? Did you test them a million times? Or did you already have a great recipe in your pocket?

I have a four-and-a-half year old and a one-and-a-half year old. So I had been testing different recipes on them for a few weeks. They like the ones with the chocolate chips, obviously. But no, I kind of looked up what other people had done for pancake recipes, and then started modifying it. Not only to make it more delicious, but also [because] hundreds of pancakes is different than ten pancakes, right? 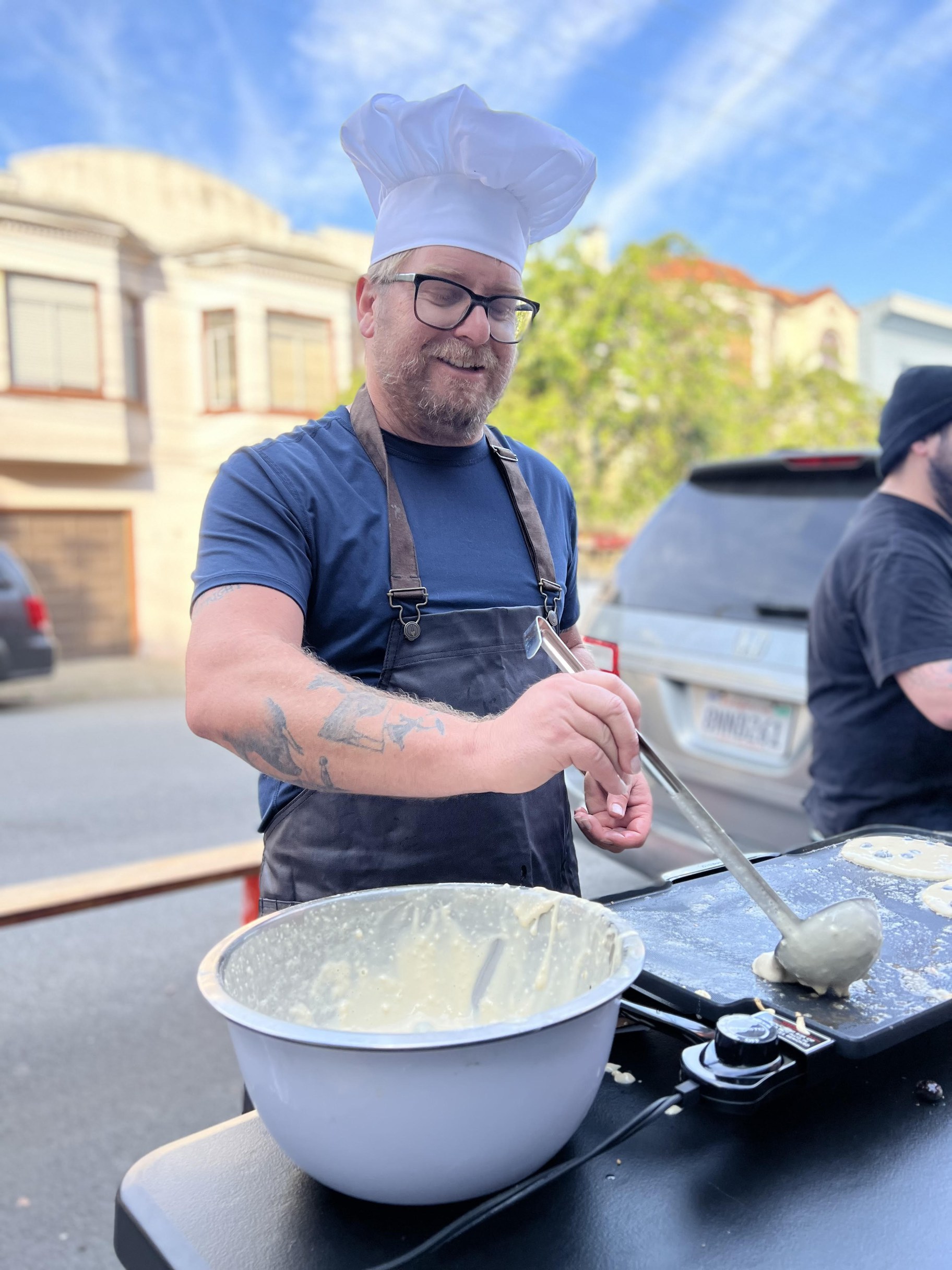 With an electric griddle and an extension cord, Curtis Kimball posted flyers in his Bernal Heights neighborhood and made pancakes to bring people together. Photo courtesy of Curtis Kimball.

What did you serve them with?

I had three different kinds of pancakes going. There were plain pancakes at one griddle, blueberry pancakes at another griddle, and chocolate chip pancakes at another one. I also had sprinkles and whipped cream and maple syrup and butter. Other people ended up bringing more toppings, and people brought orange juice and coffee and all kinds of stuff just to share with the community.

Have other people taken your example and started doing their own in different neighborhoods?

Yes, the first one that I went to was this past weekend in a neighborhood maybe two or three miles from where I live. She had messaged me on Twitter and asked if she could do the same thing. And I was like, “Oh, yeah, of course.”

A lot of us have found how hard it can be to make friends as an adult. And of course, our situation during the past two years has only made that harder. Have you in fact made some new friends because of your pancake parties?

Oh yeah, I think it takes a long time to make close friends. You just have to plant the seeds. And in my case, I figured I have a pretty odd personality. So I may have to plant more seeds than others. But I think I've planted the seeds. And now people know me and I can talk to them and approach them around the neighborhood. And I think if I just told people that, hey, I was the guy that made pancakes, that's a good conversation starter at the very least.

What's interesting about it is that it didn't take a lot from me, right? Now it feels like a big idea because it's inspired a lot of people, but it was just a small idea from me. And it really only took like two total hours of courage, one hour to hang up the flyers and then the hour to set up and get started. So it's really a good return on investment. My advice is always [that] there's really no difference between pretending that you're brave and being brave. So I say just pretend that you're brave and, and see what happens.

Do you have a preferred way that you eat your pancakes?

Funnily enough, I don't really eat pancakes. I mean, I taste them. I know they're delicious, but I'm not really a breakfast person. But it's the perfect way to connect to people. And I've said other places, even if you don't like pancakes, you like the idea of pancakes.