“Am I even Korean anymore if there’s no one left to call and ask which brand of seaweed to buy?” writes Michelle Zauner in the first paragraph of her new memoir, “Crying in H Mart.” Zauner, who records music under the name Japanese Breakfast, recalls her childhood in the Pacific Northwest with visits every other summer to Seoul, her mother’s battle with stage 4 cancer, and reconnecting with her roots by learning to cook Korean dishes.

KCRW: Your mother was working at the front desk of a hotel when she met your father, an American who found himself in Seoul selling used cars to the U.S. military. They moved back to the states not long after you were born. What was your childhood like growing up biracial in Eugene, Oregon?

Michelle Zauner: “As a child, that was something that I felt made me really special. It was before the differences ... from your peers begin to feel like a pockmark, which I feel is something that begins to happen more in the teenage years. But even growing up in Eugene, where the population is maybe 95% Caucasian, as a young child, I really enjoyed my biracial upbringing, and I was incredibly privileged to get to visit Seoul every other summer. So it really felt like I possessed the best of both worlds for a time.”

What was the response to you when you would go back to Korea on your biannual trips to visit family?

“It's interesting because I always just felt extremely coddled. I grew up in a really small family. It was just my mom and my dad growing up in Eugene, and when I went to Seoul to visit my mother's family, I was surrounded by relatives. My grandmother's apartment was a three-bedroom apartment with my two aunts, and my cousin lived in this little closet-size room, and my grandmother's there. My mother and I would sleep on a futon on the ground in the living room. At that age, I was so used to growing up alone without siblings, in the woods. And it was kind of a lonely childhood. Going to Seoul and being sort of coddled by all these Korean women was a real delight for me as a child.”

Could you describe the role that food had in these visits, and some of the experiences cooking or being fed that remain indelibly etched in you?

“When I was a kid, I was such a tomboy, and I really struggled to be good. My mom was constantly scolding me because I was very reckless and rowdy and impatient. At an early age, I began to realize that while I couldn't be well behaved or good, I was excellent at being courageous. And I was always really rewarded for being a courageous eater, particularly in Korea. I remember all of my relatives would always sort of call me ‘yeppeun,’ which meant ‘pretty,’ every time I ate well, so it was always something that was really celebrated in my home.

I think I also just didn't realize that my mom was really withholding about her homesickness. She was sort of shielding me from that part of her that she kept hidden from both my father and I. And every time we visited Korea, she really lit up to eat the sort of foods that she had been missing. In the end, that was a big part of my childhood that she really wanted to share with me. I think, in a way, watching me really enjoy the foods that she grew up with made her think ‘that one's mine.’”

How old were you when your mother was diagnosed with cancer, and where were you in your life?

“I was 25 years old when we found out that my mom had stage four GI [gastrointestinal] cancer. I was sort of floundering, in all of the ways that my mother had warned me I was going to flounder. By then, I had lived away from home for seven years. And I guess she had kind of accepted that playing music was not something I was going to grow out of. At one point, she said something really lovely to me, where she said, ‘I realized I've just never met someone like you before.’ And I had kind of taken that to mean, ‘I get it. This is not something that's going away. And I didn't get it before. And now I'm going to give you the space to go and do that.’

But things weren't going particularly well. I was in a severely underrated band called Little Big League. I was living in Philadelphia, and we were doing a lot of DIY tours, sleeping on floors, paying our dues, playing basement shows to 10 people, getting paid in cigarette butts and cans of soup.

And I got the call when I was in New York. I think I was beginning to question if this lifestyle was really going to work out for me. I hit 25, and it was sort of like, ‘Well, maybe if I haven't made it so far, I should start coming up with a backup plan.’ I was in New York trying to start getting that backup plan together. I was hanging out with a friend who worked at a music magazine called The Fader, thinking maybe I could get involved in music journalism, when I got the call that my mom was sick.”

At that point, the women in your mother’s life took shifts caring for her. Food must have been a very fraught and important part of that caring. How did food find its way to how you tended to your mom, and then later, on reconnecting with memories of her?

“Beyond the general idea of food being this love language for a lot of parents and their children or families, I think that there was also this sense of shame that I was trying to undo that I had failed as a caretaker. I really struggled. There was the first six weeks that my mom went through her first chemo treatment, and I had flown to Eugene to live there as a caretaker. And I knew, especially as an only child, that I had this responsibility, that this major role reversal was coming. And that I had always feared this moment. And it had arrived much sooner than I had thought. But I really wanted to take that responsibility of caring for my mother and nourishing my mother.

And I discovered … this unquestioned part of my identity. I am Korean. I know this. I know Korean food. Suddenly, I realized I didn't know it as well as I thought. What I love about Korean food is that it really presents the extremes. Our seafood is freshly killed, and still moving often. And the hot food is scalding and still bubbling in these little earthenware cauldrons. And cold food is served in bowls of ice or on the rocks. It's really red. It's really spicy. It's really flavorful.

When you're going through chemotherapy, and you're nauseous all the time and you're developing sores on your tongue, you can't eat that kind of food. I was really at a loss of like, ‘What can I make my mother? I don't know the type of dishes that you eat as a Korean person when you're ill, because why would I have eaten those things growing up?’ So I really struggled. There's a section of the book where I list a number of failures, not for lack of trying, to try to find how to feed my mom. And it was just extremely difficult. There was this woman that came to live with us named Kay, who really took that over.

And I think that after my mother passed away, a lot of the reason why I started cooking Korean food was this sort of psychological undoing of this shame of failure that I felt during the caretaking process of not knowing how to help her.”

You found your way to Maangchi, who is a really famous YouTube Korean cooking teacher, who has now written several books. What was it about her that you found solace and help in?

“I think that one thing about Korean culture is that it can be very private. I think a lot of East Asian cultures don't use measurements or write down recipes. It's this sort of private thing that's passed down within families. So when this woman came to live with us, this sort of education that was mysterious and barred from me. I asked her a number of times, ‘Please let me help you prepare these dishes.’ And it wasn't really something that was readily shared with me. I think that a lot of Korean families have this kind of coveted information.

So Maangchi was one of the few people I found that taught you how to cook Korean food in English and readily shared this information that seems very private from other women. She’s such an effervescent presence. She’s completely magnetic. And such a soothing woman. And I remember she pronounced zucchini as ‘zukweeny,’ and I had such a wonderful memory of the way that my mom said ‘zukweeny.’ I just had such a comfort from her. And I started following her videos religiously and discovered it was the one real joy, week to week, getting to cook with her. She came to mean so much to me. This YouTube vlogger I'd never met really saved me in a lot of ways, really brought joy back into my life and in a very quiet way.” 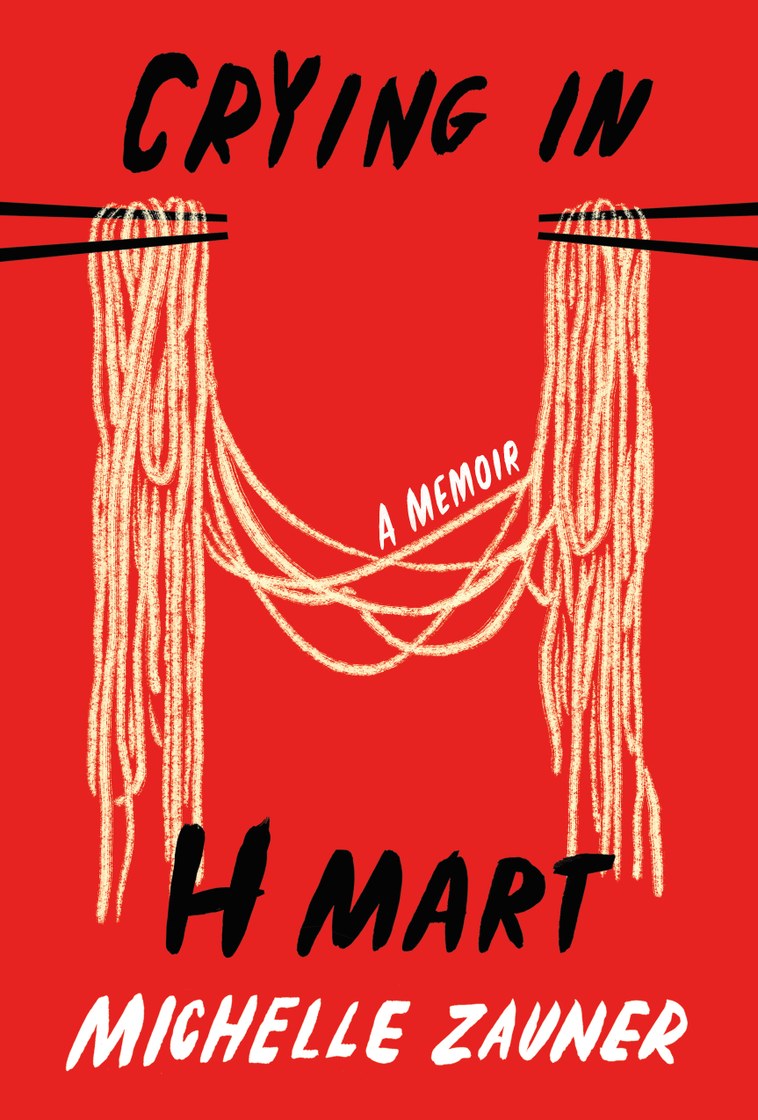 Born from an essay in The New Yorker, Michelle Zauner’s memoir is “Crying in H Mart.” Photo courtesy of Knopf.

END_OF_DOCUMENT_TOKEN_TO_BE_REPLACED
KCRW's Drive to the Future: TODAY, your dollars will be doubled up to $15,000, thanks to the generosity of KCRW Champion Enid Koffler AND we'll double your meals to our food bank partners in Los Angeles and Santa Barbara.
Give Now
Give Now