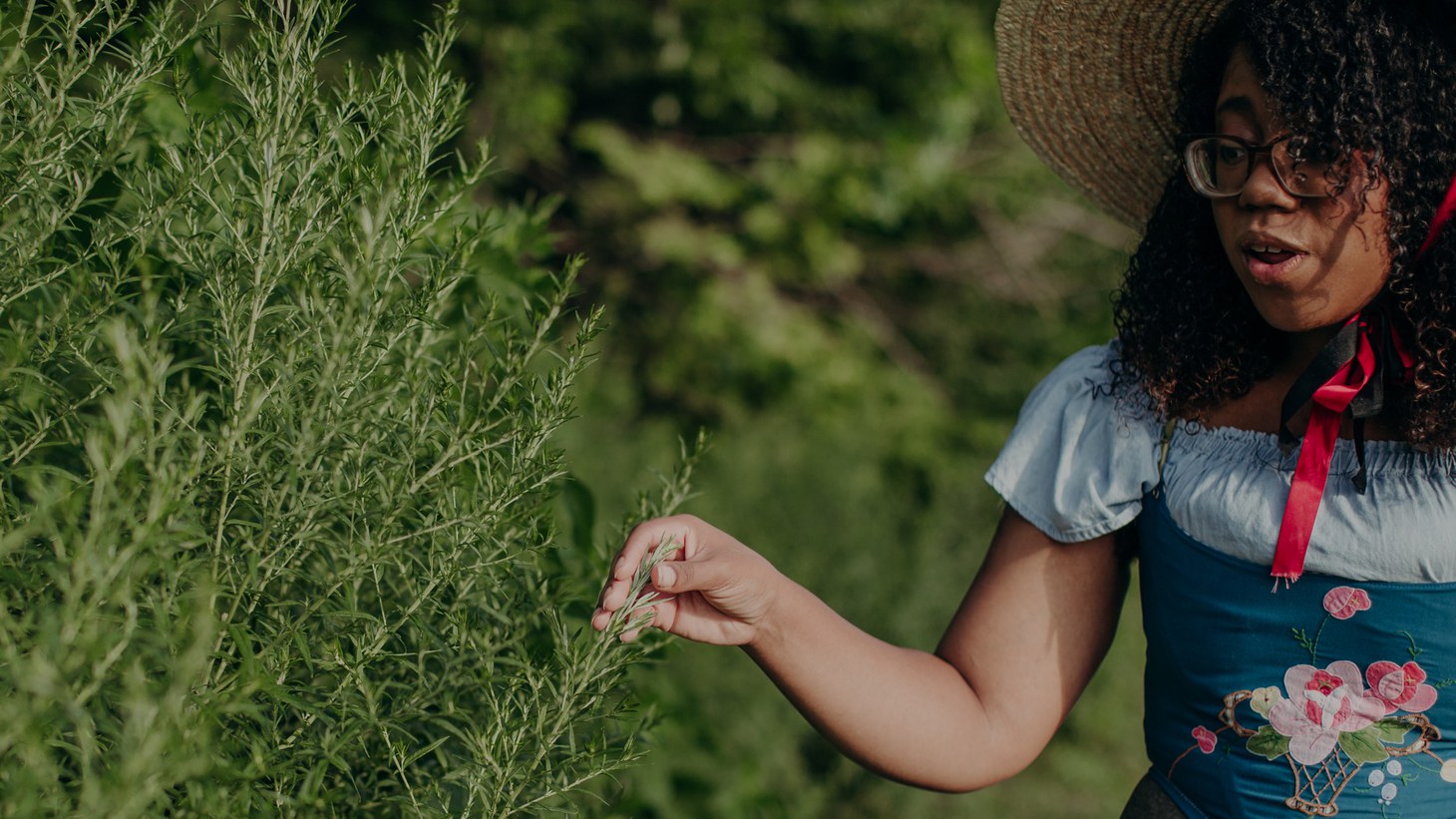 “When you can identify things in nature, you can respect it more,” says Alexis Nikole Nelson aka The Black Forager. Photo by Rachel Joy Barehl.

Alexis Nikole Nelson published her first TikTok post in March,  foraging for food in her neighborhood instead of going to the grocery store. She woke up with tens of thousands of views. Since her early days at summer camp, the Ohio native has always been interested in nature. Nelson discusses what she forages and how to win over skeptics by offering them education when foraging in public spaces. “It’s a weird time to be a tall, loud, Black woman doing an activity that someone can’t immediately identify,” she says. Nelson has close to 4 million followers.

Your songs bring me such pure joy when I am just in the depths of despair.

Writing them has been a really big source of joy during the last tumultuous nine or 10 months that everyone's been going through. So to hear that it makes other people smile, that's fantastic. It makes me so happy to hear.

When did you start creating songs for TikTok?

I started my TikTok almost exactly a year ago. My day job is in digital marketing, and focused on social media. With Tiktok being the big new thing, my boss wanted me to know how it worked. And I would much rather fail under my own name than by the company's name. So around March of 2020, I posted my first video. It was a “Hey, I know you're nervous about going to the grocery store. I am too. Here's five plants in your neighborhood that you can harvest and eat.”

I didn't think anything of it. I've foraged as a hobby for a really long time, and this was my first time committing it to a video. I woke up the next day, and it had tens of thousands of views, which for me was absolutely insane. So I figured I'll just keep taking people along for everything that I'm doing, and all the weird foods that I make, and the songs that I sing, regardless of whether anyone's listening or not.

Where did you grow up? And where do you live now?

I grew up in Cincinnati, Ohio, and I currently live in Columbus, Ohio, so I have not strayed too far from home.

How did you start looking for edibles in the great outdoors?

If we want to go all the way back, my mom is extremely into gardening – that's kind of been her meditative practice. I remember being very little and being outside with my mom, and she pointed out a type of grass that looked a little different than the rest of the grass. And when you broke it, it smelled like onions. She said, “This is onion grass. You can eat it if you want to. It comes up as a weed.”

I don't know why that stuck with me all throughout the years. But as I got older, I went to summer camps out in the middle of the woods and a camp counselor would haphazardly tell us about an edible plant, and I would just commit it to memory. I'd go to the library and read about it later. And it's just always been an interest of mine.

This kind of intertwining between nature and the food we eat and how that makes us kind of have a bigger respect. I feel like when you can identify things in nature, you respect it a little bit more than you would otherwise. And now it's just grown into a full-blown obsession.

You're a vegan. Did veganism intersect with foraging that was already happening? And has it sort of powered it in a way?

When you look at it that way, it really does kind of seem like a logical step. I've technically been foraging in some sort of capacity since I was five or six years-old. But now it's wonderful, because it does add this kind of seasonal variety to my plant-based diet. It just keeps things interesting. It makes me constantly challenge myself in the kitchen, more so than I would have five years ago, and more so than I would have five years before that. It's definitely challenging. But I love those kinds of challenges.

How much of your daily eating includes what you forage?

It really varies during the year. But I would say in terms of volume, it's probably around 20% during the winter. But when we get to late summer, and early fall, when you have a lot of more calorie-dense, plentiful foods coming into fruition, I could have an entire day where everything that I'm making, with the exception of maybe like an olive oil that's tossed into a batter, or tossed onto some greens, is something that I foraged for myself.

This is a moment filled with Karens who want to police the whereabouts of people of color. How do you deal with that, as you look for food in public parks and other public spaces?

The first step is knowing the rules for where you are. Not necessarily saying that I do this myself – but maybe you're not always following those rules – because some of them are antiquated, and they were put in place to do harm to indigenous people and to people of color. But knowing the rules for where you are, when it comes to public parks and city parks, especially, is step one. Because if you're in a space and you have a permit to be gathering there – like I do for Wayne National Forest – and someone comes up to you and is skeptical about what you're doing, and you have a piece of paper to show them and say, “I can actually be doing this and maybe we can learn some stuff together. Do you want to know what it is that I am picking?” Sometimes, the answer is yes. Most of the time, the answer is no.

And while I often want to get angry and be frustrated with people who are overly skeptical or even rude when they come up to me asking me what I'm doing, I really try to err on the side of giving them the benefit of the doubt, and offering them education, and a glimpse into what I'm doing, if at all possible.

But if someone is seeming particularly persnickety, I also know when to call it, and to just head home. It's a weird time to be a tall, loud, black woman doing an activity that someone can't immediately identify.

After we're allowed out of our bubbles, do you see yourself doing a lot of tours taking people out?

Absolutely. I have already been talking to folks at parks that are wanting and willing to host foraging walkabouts because l love teaching people in-person. I ended up becoming a camp counselor at that same overnight camp that I went to as a kid. And my favorite thing to teach was wilderness skills and the things you can eat in the woods.

There's something really cool about watching recognition of plants happening with people. I honestly just believe that there is a degree of reverence for your surroundings that comes from getting to know your surroundings better. I love our environment, I would love for generations upon generations to continue to get to enjoy it. And equally, if not in more pristine levels, than it is now. So anything that I can do that helps folks feel more connected to their surroundings, feels like a win for me.

Alexis Nikole Nelson, aka The Black Forager, found her audience on TikTok as she foraged for wild vegetation and her cultural roots.

In his film "Gather," Sanjay Rawal documents the growing movement of Native Americans reclaiming their identity through food sovereignty.