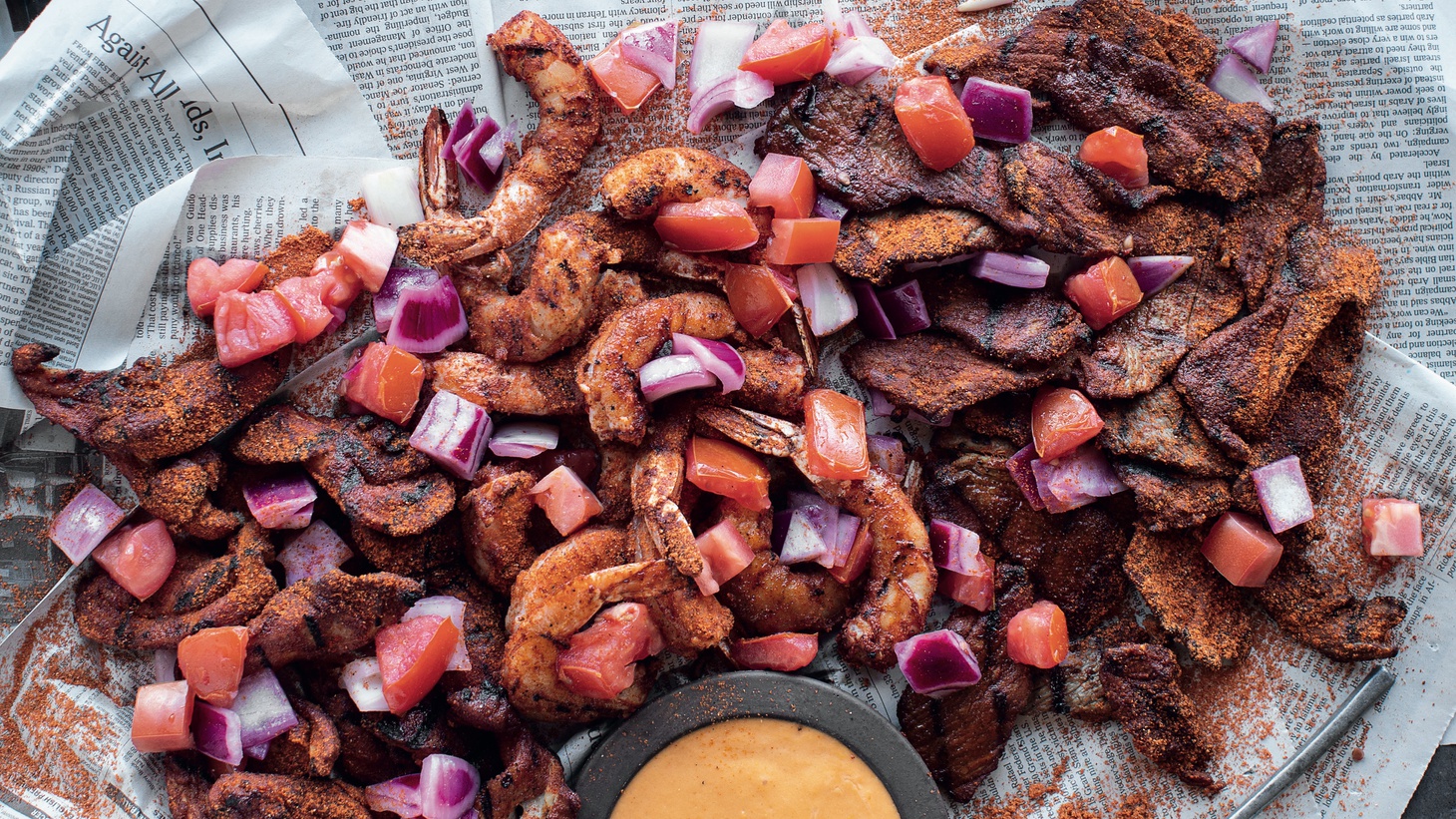 “‘My America’ was definitely a reflection of my culture, my heritage, and the surroundings I was in,” says chef Kwame Onwuachi. Growing up in the melting pot of the Bronx, he ate the West African, Caribbean, and Southern cuisines of his home kitchen and neighborhood.

In his debut cookbook “My America: Recipes from a Young Black Chef,” Onwuachi says that food is how he makes sense of the world. With recipes that pay homage to his time in Nigeria as both a child and a returning adult, he says that he modernized dishes and reflected on his early years.

“That’s my job,” he says, “to use my platform to continue to put this food on this pedestal and show it can be as refined as any other cuisine.”

KCRW: Can you describe your America, which you say is devoid of hotdogs and apple pie?

Kwame Onwuachi: “My America” was definitely a reflection of my culture, my heritage, and the surroundings that I was in. I grew up in the Bronx, NY. It was a melting pot of so many different cuisines, from West African to Caribbean, to even Southern cuisine. There were so many different aspects of what made my American food different. And that's what I wanted to bring to the forefront with this cookbook – that we're such a melting pot as Americans. And, the food is reflected in that.

Can you tell us what was coming out of the kitchens of Jewel and Cassie, your mom and grandma?

Delicious things were coming out of the kitchen. To be specific, there was shrimp etouffee, there was gumbo, there was oxtail, curry, goat, Jollof, rice, egusi soup – all these different representations of different cultures that make me who I am. But also, there were things that we ate outside of there, like Puerto Rican food and Dominican food. So I wanted to showcase all of that with this book.

You say that food is how you make sense of the world. How did your time in Nigeria inform your cooking? Did it change the way you viewed the food you had grown up eating?

It absolutely changed the way that I viewed food growing up, because we had to raise our own livestock and procure our own vegetables. So it gave me a deeper understanding of what it takes to even produce something. If we wanted a ten-piece chicken wing bucket, we had to raise five chickens. And that took five months. So it wasn't as easy as just going and getting something like it is in America. I think that shaped the way that I view food in my profession as well. 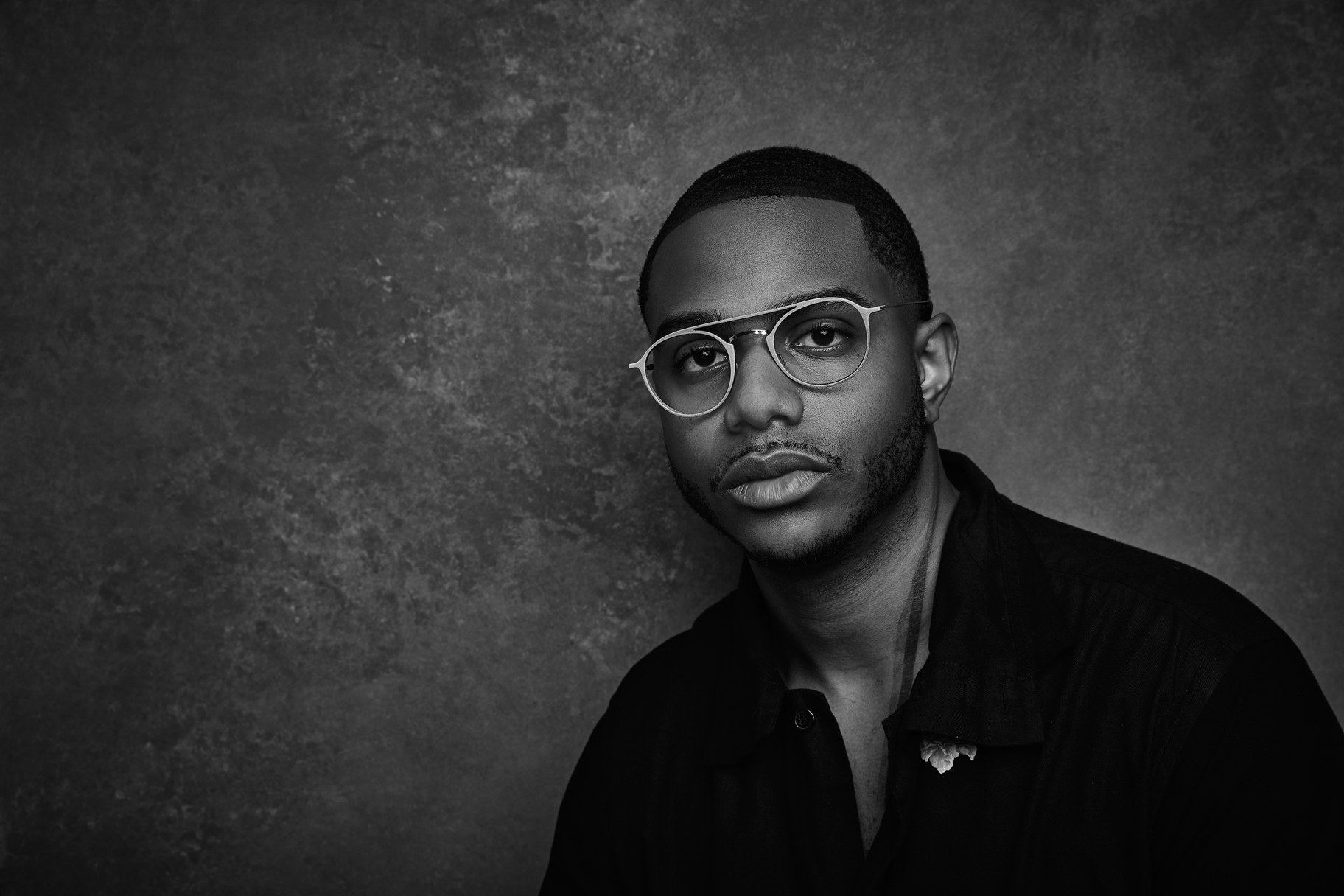 “That’s my job,” says Kwame Onwuachi, “to use my platform to continue to put this food on this pedestal and show it can be as refined as any other cuisine.” Photo by Storm.

On Victoria Island in Africa, you made your food with both African and diasporic roots for African diners. Can you share a bit of that experience?

It was beautiful to go back as an adult. I spent my time there from [ages] ten to 12. And that was my first true injection into the culture. But going back as an adult, I was able to travel on the roads that I traveled when I was a kid and really get inspiration. I was cooking a dinner at this restaurant … I wanted to pay homage to my time there as a child and recreate some dishes that I had eaten way back when, but the way that I view things from my culinary lens [now].

The diners that were there had really interesting responses to what you served, right?

They've never seen it done in that way. So it was exciting for them, and interesting to see their culture reflected on a plate in ways that they haven't seen before.

Could you describe suya and the yaji spice?

Suya is the dish, and yaji is the spice used to make the dish. It's like the grandfather of barbecue. It's thinly-sliced meat seasoned heavily with this spice blend that has ginger, garlic, onion, peanut powder, grains of paradise, and chilies. It's just grilled over an open flame and then it's served with chopped onions and tomatoes. It's always around and you can smell it creeping around the corners of the markets.

Most of us who cook know that a lot of labor that happens, particularly in the diasporic kitchen, can be hidden. Can you talk about the significance of the pantry and that hidden labor?

All these dishes have lots of layers of flavor, and the pantry is one of the most important things, because we take vegetables and turn them into paste. We take things and pickle them, we build spices, and we use that to start our dishes. So the pantry is really important to get a head start on these things, or else it would take you a long time if you don't have anything built up in that pantry.

Can you explain how cayenne and Tabasco are both rooted in slavery, and how jerk is a dish of survival?

Jerk came from a dish of freedom. Enslaved people escaped and were fleeing slavery and they didn't want to give up their location. So when they did hunt and cook, they would use the ingredients that were around. So like the wild thyme, the wild allspice, Thai chilies that grew wild. And they would rub those into the meat to help preserve it. And then when they cooked it, they would dig a hole, put these meats in the hole, and then cover it with embers and then cover that so the smoke wouldn't reveal their location. And that's how jerk came along. 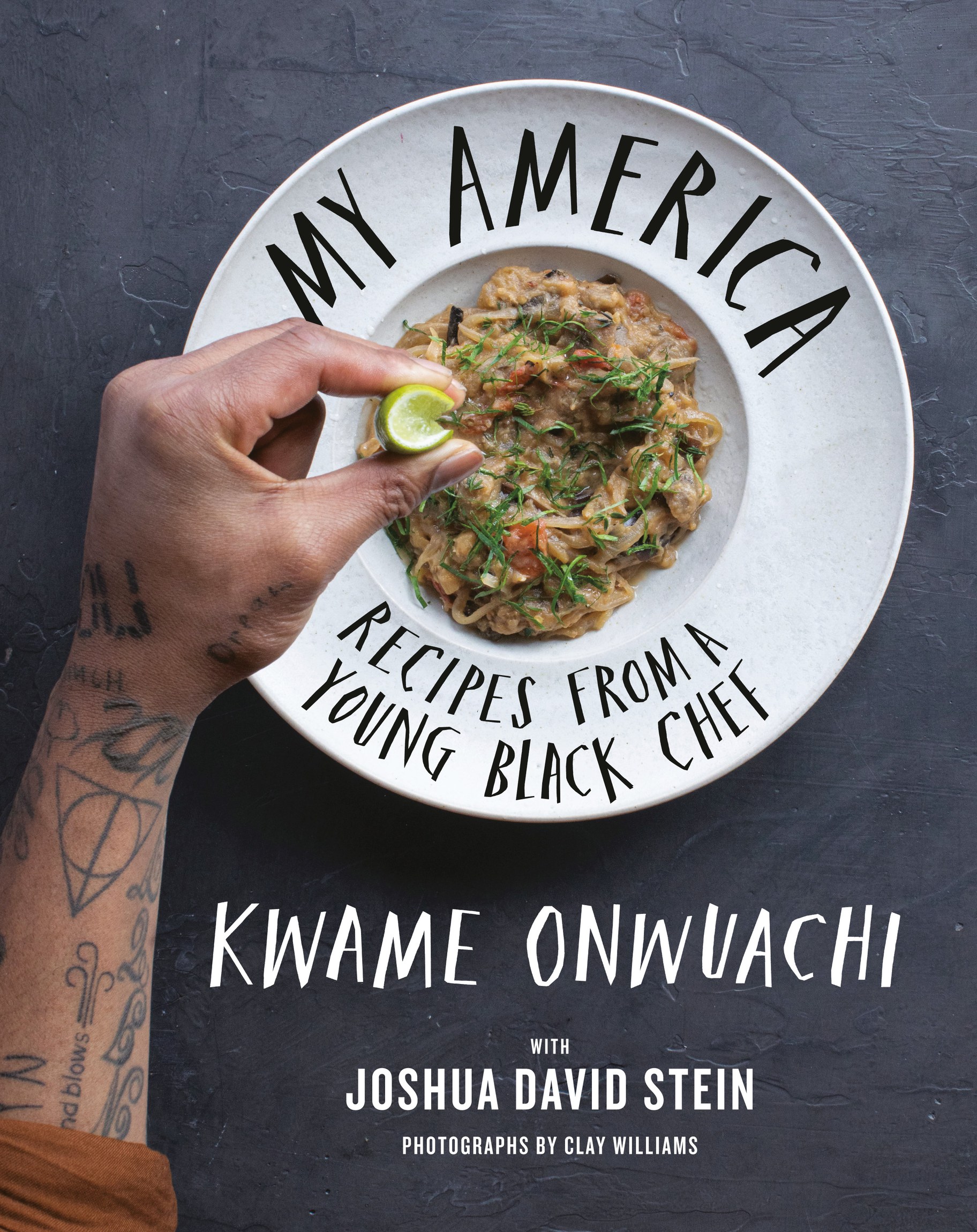 “My America” is Kwame Onwuachi’s first cookbook and the follow-up to “Notes from a Young Black Chef: A Memoir,” which is being adapted for the screen. Photo courtesy of Knopf.

Suya is the grandfather of American BBQ. In Nigeria, the spices draw out and ﬁre up the meats, often cooked over an open ﬂame. Here I do the same. But if you don’t have a grill, use a well- oiled cast- iron skillet over high heat in a kitchen with open windows. The open windows are very important, unless you ﬁnd the blare of a smoke alarm harmonious and enjoy ﬁts of sneezing. I ﬁnd the sweetness of the char plus the heat of the spice totally irresistible. I did when I ﬁrst smelled it from beyond the walls of my grandfather’s compound in Nigeria, or when we went to market when I could sneak a skewer. (Since my grandfather was an obi, or chief, there were many customs and rules around what he and his family could eat.) When I opened my second restaurant, Kith and Kin, I wanted to suya everything. The reaction from the diners, at least initially, was mixed. Many Nigerians scoffed at the idea that suya could be applied to, for instance, brussels sprouts. They were, on the whole, proud that Nigerian cuisine was being given the attention it so much deserved but arrived at the table with some strong opinions. Judging from the empty bowls that came back to the kitchen, I think I won them over. But it was always a battle.

In this recipe, I stick to the traditional proteins— steak, chicken, and shrimp. In Nigeria, suya is served with sliced tomatoes and onions, which help mellow the heat. Here that role is played by a tomato- ginger soubise and a traditional onion cream sauce from France, and I keep the tomatoes and onions in the form of pickles, whose burst of acidity rounds out the ﬂavors.

*Note: Kwame makes this from scratch, but you can find it at most grocery stores or online. Kwame’s recipe is included in the cookbook.

Pickling is an act of food preservation and also, thankfully for us, adds an entire dimension of bright angular flavors. This pickling liquid includes a touch of spice but it largely neutral, allowing the flavors of the pickled vegetables to emerge. I like the balance between the thyme and coriander on the softer herbal side with the habanero and ginger more biting, but play around as you like. Garlic goes well, ditto allspice, cloves, and bay leaf. Here’s your chance to go freeform and experiment with what aromatics you use in the pickling liquid and what you pickle. Among my favorite vegetables to pickle are onions, mushrooms, and pig’s feet—which aren’t a vegetable at all, of course, but are delicious.

Note: Spice pickling liquid will keep in an airtight container in the refrigerator for up to 6 months.

From My America: Recipes from a Young Black Chef by Kwame Onwuachi with Joshua David Stein. Copyright © 2022 by Kwame Onwuachi. Excerpted by permission of Alfred A. Knopf, a division of Penguin Random House LLC. All rights reserved. No part of this excerpt may be reproduced or reprinted without permission in writing from the publisher.