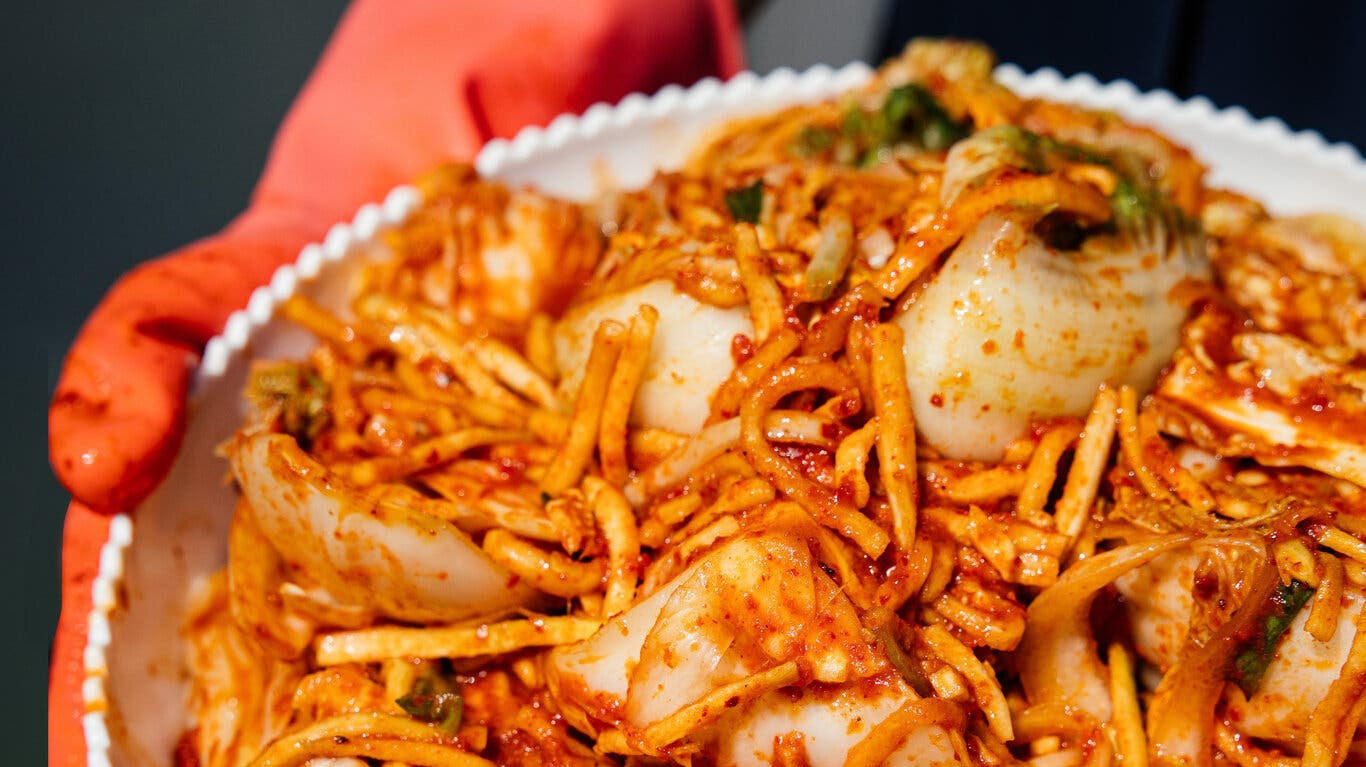 Kimjang is a day-long celebration in Korea where women gather to take the fall harvest of napa cabbage to make kimchi, the fermented vegetable side dish. New York Times columnist Eric Kim describes the process including the smell of fish sauce, the volume of cabbage, and the responsibilities and roles taken on by the community to participate. Kim wrote about the practice of kimjang for the New York Times.

KCRW: Give us an idea of what kimjang is.

Eric Kim: Historically, it would be a big kimchi making. It takes a few days. You're taking the fall crop of napa cabbages, and turning them into kimchi so that they can last through the winter. What you can picture are hundreds of yellow napa cabbages – in the fall are very butter yellow, and they just look really cute. They're little cabbages and you brine them in large plastic containers or bowls. My mom has some of these bowls at home in Atlanta.

I think one thing that's really kind of iconic about kimjang is the smell. It is the smell of fish sauce and cabbage, but also the salty, spicy, wonderful umami-rich flavors of kimchi. And it's about the volume. It's a lot of kimchi that you're making with your community to make it easier to manage. Each person has a responsibility. One person is responsible for the daikon. One person is responsible for the sauce, and that person's like a very experienced kimchi maker. So there are different roles depending on your experience level. It's just a really good time.

Is it really common in Korea to brine the cabbage to age it in traditional pottery in the ground?

I think it is still done. It's not as common in urban spaces like Seoul, where the space is a little more limited.I do think there are people doing the traditional way still, but more often than not now, if they're not buying your own kimchi, you are storing it in your kimchi refrigerator. I love the fact that kimchi refrigerators are meant to hold the kimchi so that they ferment at just the right rate. So these fridges are colder than regular fridges like a degree above freezing, so 33 degrees Fahrenheit. I just love that you've taken this cultural thing, which is burying the kimchi in the ground because in the ground, it regulates the temperature in the winter, it keeps it from freezing and in the summer, it prevents it from being too hot. I just love that there are now fridges – there's technology that replicates this cultural tradition. In fact, UNESCO has coined kimjang as an intangible cultural heritage, which I think is really profound. It means that there's this living knowledge that Korean people possess and kimjang, most importantly, is an effort to pass on not knowledge, because it's sort of like teaching. The best way to learn is by doing.

I love that it's not the kimchi that has been recognized, it's the practice.

I also think what's really beautiful is the way it's really evolved. With people moving out of Korea into the diaspora, I interviewed a bunch of people from the United States and one kind of common thread was that a lot of us make kimchi alone, or over the phone, or over Zoom. There are modern ways to have a kimjang, and I'm trying to get as many people to make kimchi as possible. I think kimjang kind of explains why you would do it culturally, or emotionally.

So if we're gonna do it on our own, do we have to make the kind of kimchi in which you make the sauce? And then you introduce it into quartered, or halved cabbages layer-by-layer? Or is there an easier way for us to do it, especially if we're going to make it for ourselves, or for just a couple people?

There’s different kimchi for different experience levels, if you will, or different desires of involvement.  I think the what you just described is the traditional tongbaechu, better kimchi, which just means like whole napa cabbage kimchi, and it is a very relaxing way to make kimchi because you're sort of really taking care that each leaf gets enough sauce, and it's all held together by the root.

But the way I do it, especially now, and especially as someone who enjoys the fermentation process and playing around with it, is I like to make small scale, chopped napa cabbage kimchi. There are a lot of reasons for this. But one main reason is when you chop the cabbage ahead of time and then salted it, it brines, which is an essential step for kimchi-making. The brining step, that step can take anywhere from four to eight hours, maybe even longer. But if you chop the cabbage first, it only takes an hour or two. I think that kind of kimchi is known as the easy method for kimchi. And it's something that a lot of people do at home because if you're making a small scale amount, especially but it all happens so much faster.

There’s one amazing thing that Mother-In-Law’s owner Lauryn Chun told me. She said, if you can make a salad, you can make kimchi. And that really stuck with me because this second method where you chop the cabbage first, once you brine the cabbage, and then you make the sauce. It's just like, one, two. And then the third step is just tossing it all together like a salad. I think phrasing it like that for people who have never made it, will  encourage them to try it because it's really not as hard as it seems. All you need is a little knowledge. That's the point of a kimjang –  to pass on that knowledge.

It’s not as spicy as it looks. There's a great deal of variation where some forego the red pepper, which actually is very spicy.

That's a great thing about making your own kimchi. You can sort of adjust the heat level according to what you like. And there's a baek kimchi, which means white kimchi, and it's basically the same as the regular kimchi, but it doesn't have the culture gochugaru. But what's really lovely is with that version, the blonde kimchi if you will, you can really taste the kind of sweetness of the full cabbage. You can taste the marinade ingredients that come through in a really pure way.

I like introducing people to different kimchi methods because kimchi is also just a way to preserve whatever vegetables you have in your fridge – you’re salting and fermenting them. So I play around with my kimchis all the time. My latest batch has some beetroot in it. I even added some Tuscan kale. These are flavors that I really love, and they also dye the kimchi a gorgeous magenta color, so you can have a lot of fun with it.

Who is allowed in traditional kimchi gatherings?

Everyone's allowed. Traditionally, it's definitely a matriarchal event. I've received a lot of comments from Koreans who've read this story – it's interesting to see kimchi making so front and center in the New York Times. And I think the response has been really lovely. But one one person was talking about how historically, maybe if you were a Korean woman, kimjang could be a moment that you dreaded, because it meant a day of a lot of work. And I thought that was really interesting and valid.

I think it's important to always examine traditions and see how they fit in with contemporary life. I think it's safe to say that everyone should help with kimjang,  everyone should participate, especially if you plan to eat it. Even if your role in the family is to wash the dishes, I think kimchi making is something that everyone should get involved in. Because it's also a really joyful thing to get to know the fermentation process. You know, it's your food. I think learning this art of kimjang, this art of kimchi making is an empowering thing to learn how to ferment a vegetable that lasts you for a lifetime.

It's so much easier than most people think. When you refer to brining the cabbage, people who have never done it might think it's very exotic. But essentially, you're just using salt to remove some of the water from the kimchi so it remains crunchy.

Exactly. Removing the moisture maintains the texture, but also it creates the environment for lactic acid bacteria to grow. That's the good bacteria. That's the tang that is going to give it its flavor, but salt is also the ingredient that keeps that environment safe so that other bacteria can't grow. It's a really magical thing. But it's different from canning. It's not about sterility. It's about growing—it's the opposite. I think once you realize that, it becomes so much less intimidating. I'm not a very precise cook, and kimchi is something that I can do. I haven't gotten to canning yet.