The ‘something’ that bind the Tortilla Tournament’s flour champions 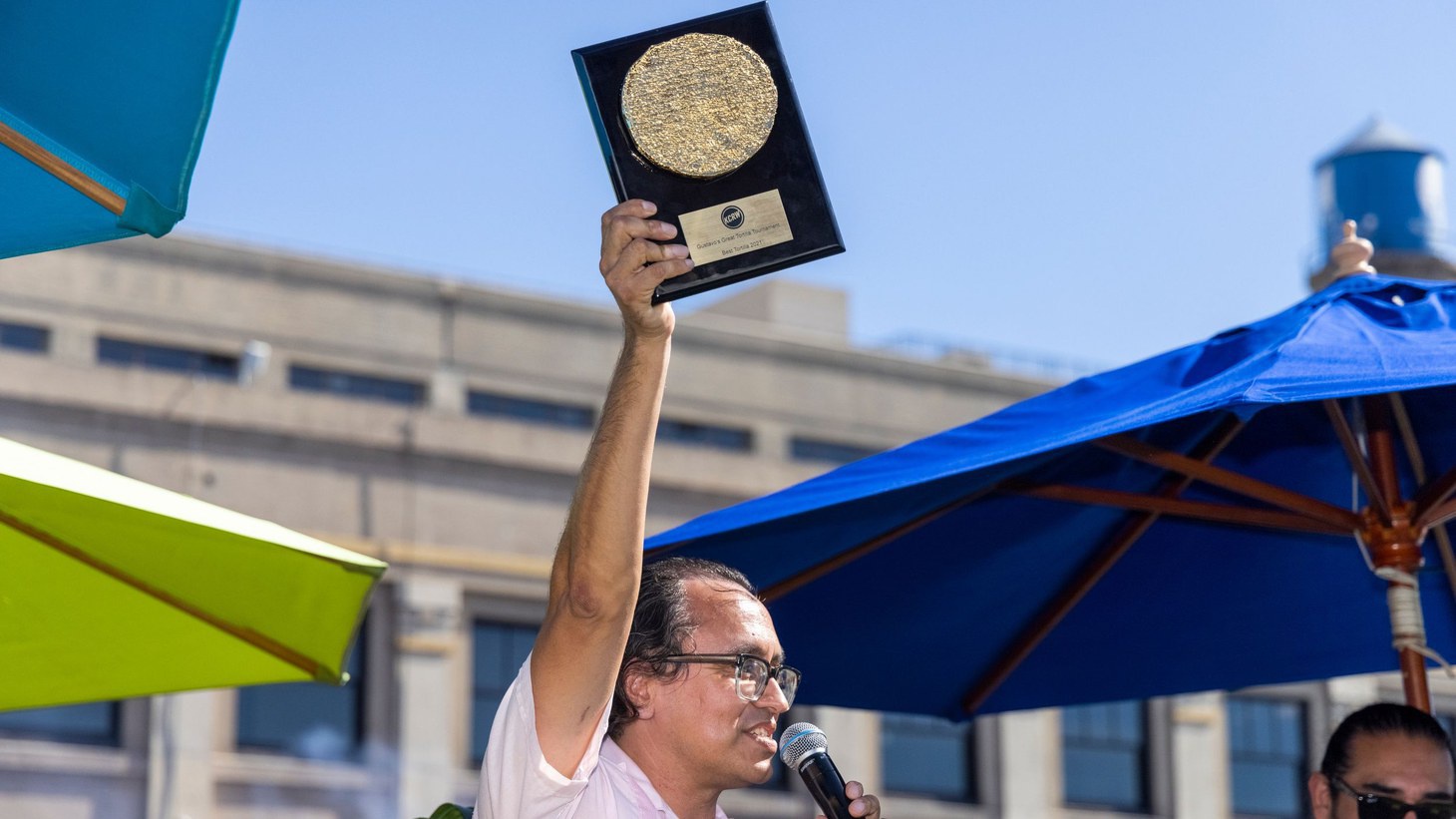 The Golden Tortilla is awarded for the best flour tortilla – usually made with lard, tallow, shortening, butter, or that special ‘something.’ Photo by Brian Feinzimer.

GRUMA would have you believe that a tortilla is just a tortilla – something that you grab from a shelf at your supermarket without thinking about it because it’s what’s there. Just a vessel for cheese and meat to have at the dinner table.

But a tortilla is not just a tortilla. In fact, there’s so much more to it, as evidenced by the fact that you’re reading this article during a tournament to crown the best tortilla in Southern California.  But, what’s in a tortilla? The best corn ones have just three ingredients: corn, water, and lime. There can be variety in the quality of each one, especially the corn, but that’s it. With those three basic ingredients, passable corn tortillas are easily attainable

A good flour tortilla, however, is harder. Like corn, the best feature is that it has very few ingredients — really just flour and water. Sometimes baking powder and salt. And the most important part: Lard. Tallow. Vegetable shortening. Butter. Something.

That something allows tortilleros the ability to stretch and bend their product unlike their corn cousins. Each one has their attributes and challenges, but especially traditions. Many tortilla makers use the something handed down for generations based on a regionality and tradition that the evil tortilla lords at GRUMA will never understand.

That’s exactly how three of our four Golden Tortilla winners see it.

For Jennifer Feltham and Teo Diaz of Sonoratown, the #TortillaTournament’s inaugural winners, the decision to use lard for their flour tortillas comes down to both a desire for umami and holding on to tradition.

“Teo’s family runs a taqueria in their hometown of San Luis Rio Colorado,” said Feltham. “This decision to use lard in their tortillas comes from a desire to remain as close as they could to what’s cooked at their restaurant while remaining as authentic as they can to tradition.”

They also found that it tastes delicious too. Umami.

But Diaz and Feltham nevertheless came across a big issue when they opened up Sonoratown. They wanted to sell burritos, but Teo’s family shop never sold them.

“So much experimentation was undertaken in finding a recipe that allowed for the bigger-sized tortillas to have the same flavor as the taco-sized tortilla,” Feltham said. “We basically had to work backwards with what we had.”

Once the ratio was correct came another problem: how to maintain the viability of the bigger tortillas.

“The tortillas for the tacos stay really supple,” says Feltham. “However, we found out that the burrito-sized tortillas dried out quickly when exposed to air and became flaky. We eventually figured out we had to keep them airtight at the restaurants to retain that softness.”

A post shared by A Texas Kitchen in SoCal (@homestate)

Briana Valdez of HomeState remembers her grandma rolling the masa balls and flattening them out for her flour tortillas. If she only thought strictly about keeping that recipe the same, then the tortillas at HomeState would have lard.

However, the founder of the SoCal Tex-Mex breakfast taco chain — and our 2020 #TortillaTournament winner —  realized that in order to personalize her tortillas and have them more accessible to a larger audience, she had to go with a different choice. So, why is butter more accessible than lard?

“Using butter broadens the appeal and allows the taco to become vegetarian if the customer wants it,” said Valdez. “We couldn’t do that with lard.”

After some experimentation, she settled on a butter with a higher fat content. What she created are some of the most pillowy and perfect balances between thick and thin tortillas out there.

For Albert Bañuelos of Burritos La Palma, our reigning #TortillaTournament champ, the choice to go with vegetable shortening comes down to a desire to allow his tortillas to stretch to the desired size.

Following the same recipes that his family used in Jerez, Zacatecas, Bañuelos’ goal was to create a tortilla in which to nestle stews like chicken tinga, carne deshebrada and birria de res.  He created a near-perfect tortilla that’s chewy and never dry.

“It’s all a natural process, Bañuelos said. “The shortening allows it to stretch but the water is the key that gives it that chewy consistency.”

Bañuelos also stresses that he doesn’t use any unnatural ingredients in any of his tortillas. “We tried a lot of different flours. For example, wheat flour we found made the mixture sticky when it tried to get rolled out. The gluten-free flour is what we use.”

Although all three champions are making tortillas in three very different ways, they’re all borne from a desire to remain as close to family traditions and regionality as possible. Ingredients aren’t disregarded and substituted for something with more oils and preservatives because it allows for easier shipping and longer shelf storage. There’s a steadfast determination to ensure that the customer is not only receiving and biting into a great taco, but that they’re biting into a piece of Sonora. Or Zacatecas. Or Texas.

In recent years, as each of these restaurants has expanded, it would be understandable if Burritos La Palma, HomeState, and Sonoratown lessened their ties to traditions to save time and money, especially during our inflationary times. Or to start using cheaper fats or adding preservatives to retain freshness as they scaled up in production.

“We had no money, no background in the restaurant business, and there was lots of trial and error,” says Jennifer Feltham.  “But we wouldn’t trade how we do it.”