Sagittarius has been good for the last year. That’s what he told us. He told us that the cage that Luna designed for him is working. She controls his money, his businesses, can read his email, can see his bank accounts, and can track the location of his phone.

He says that the next time he messes up, Luna will leave him, and take the kids with her. Avoiding this scenario makes the cage worth it.

Please Note: This episode contains frank discussions of sexual addiction and desire. All names in this episode are pseudonyms.

Sagittarius is a sex addict. His therapist told him that naming his addiction would be a good way to compartmentalize it. So he chose “Sagittarius”, a name he stole from the bow-wielding centaur of astrology known (in part) for emotional recklessness and who is represented by the planet Jupiter. Sagittarius first emailed us back in 2016, after we published an episode called HBM060: The Predators of McNeil Island. In that episode, we talked to Chris, a man once deemed by the state of Washington to be a Sexually Violent Predator. Chris told the courts that he’d changed, no longer felt desire to be devious. Sagittarius identified with Chris, saw himself as a version of Chris that had never been committed or sent to court. But Sagittarius wrote to say that, personally, he’d never say “never” again. He’d been wrong too many times.

Despite receiving some treatment, and despite the cage, Sagittarius does not feel cured of his addiction. He is actively hoarding cash, $45 of bills he keeps in his backpack. A secret kept from Luna. Another $100 and Sagittarius could break free from his cage, and pay someone to have sex with him.

In this episode, Sagittarius takes Bethany and Jeff on a walking tour of his New York City “hotspots” he used to frequent, and then takes Jeff on a late night bike ride to Battery Park, where his father once took him to see the Statue of Liberty.

Become a member of KCRW.  Tell them we sent you. 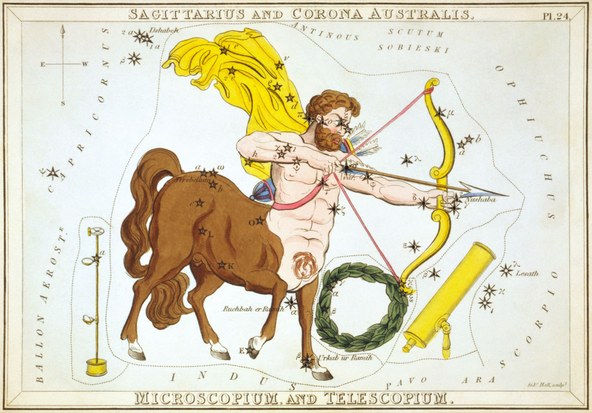 Sagittarius depicted by Jehoshaphat Aspin in a 1824 etching. Courtesy Library of Congress via Wikimedia Commons.