A civic tragedy in 4 tweets Let me set the stage, quite literally, for the latest round in the culture wars.

The New York Public Theater, famous for it's free Shakespeare in the Park series (more on the "free" part in a second) chose Julius Caesar as their opening production this year. Artistic Director, Oskar Eustis, who's directing the show, has cast Julius in the Trumpian mold: blue suit, too long red tie...you get the picture.

Now at the risk of offering a plot spoiler -- Julius Caesar is killed in the play -- indeed, assassinated. Like so much of our political climate these days, you can follow the drama that has ensued offstage via Twitter.

About a week ago, Breitbart began raising a stink about the Public Theater's artistic choices which finally reached peak fury over the weekend with a tweet from Donald Trump Jr., that said in part:

"I wonder how much of this "art" is funded by taxpayers?”

Cue the culture wars and of course the NEA, whose leader Jane Chu quickly responded, via tweet:

"No taxpayer dollars support Shakespeare in the Park's production of Julius Caesar."

Which led to an an attack on the corporate sponsors of the Public Theater, most conspicuously Delta Airlines and Bank of America, who both fairly promptly pulled their funding. Of course, announcing it via twitter. In Bank of America's words, "We are withdrawing our funding", because as they say in a tweet,

"The Public Theater chose to present Julius Caesar in such a way that was intended to provoke and offend."

Which brings us back to the current administration and Donald Trump's famous pre-inauguration Hamilton tweet,

"The Theater must always be a safe and special place.The cast of Hamilton was very rude last night to a very good man, Mike Pence. Apologize!"

And with that and the proposed elimination of funding for the NEA and others -- let the latest culture wars begin.

Now, this cuts to the core of what meaningful theater feels like. Theater isn't meant to be safe. If it's done right it should provoke -- not to political violence -- but to deeper civic thought and engagement.

No matter that Shakespeare's play is actually about the dire consequences of political assassination or, as Oskar Eustis points out, himself, in notes on this production,

"Julius Caesar can be read as a warning parable to those who try to fight for democracy by undemocratic means." 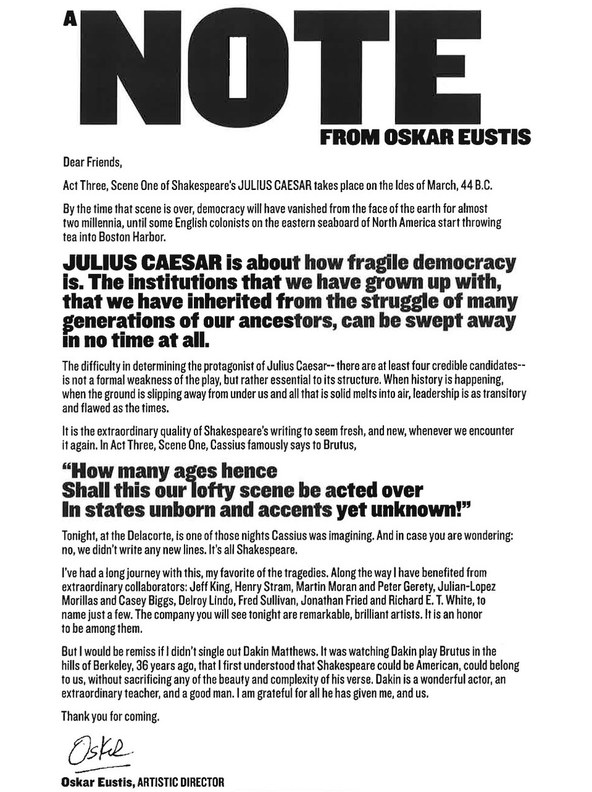 The bargain at the Public Theater is that Shakespeare that's free for all is underwritten by donors: corporate, foundations, and individuals. Just as previous culture wars have made it impossible for the government, in the guise of the NEA, to support individual artists, this round is targeted at institutions through corporate support. That will make a corporate sponsor think twice and as a civic participant stay away.

That erodes our civic fabric and our theaters. As journalist Anand Giridharadas said speaking at the TCG conference of theater leaders last weekend, "You can't outsource your civic life ...Your civic life is as good as you make it. The ancient Greeks knew that; the Romans knew that."

Photo: Gregg Henry (C) and the company in The Public Theater's Free Shakespeare in the Park production of Julius Caesar (Joan Marcus)

Here is an email that the Public Theater sent out on Monday. 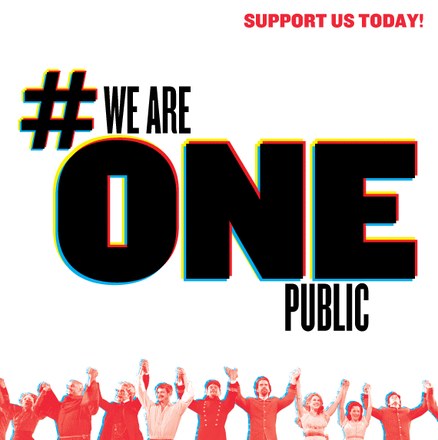 The Public Theater stands completely behind our production of Julius Caesar. We understand and respect the right of our sponsors and supporters to allocate their funding in line with their own values. We recognize that our interpretation of the play has provoked heated discussion; audiences, sponsors and supporters have expressed varying viewpoints and opinions.

Such discussion is exactly the goal of our civically-engaged theater; this discourse is the basis of a healthy democracy. Our production of Julius Caesar in no way advocates violence towards anyone. Shakespeare's play, and our production, make the opposite point: those who attempt to defend democracy by undemocratic means pay a terrible price and destroy the very thing they are fighting to save. For over 400 years, Shakespeare’s play has told this story and we are proud to be telling it again in Central Park.