Maybe it was the eggs? Both plays began with eggs. Scrambled eggs.

Onstage, the woman of the house gets up early, before her husband, and starts the daily ritual of making breakfast. In one kitchen you can literally hear the crack of the egg shell and the scrape of the fork in the glass bowl. In the other, it's all 'make-believe,' a series of mimed gestures.

One is the "cramped little closet" of a kitchen in the Ebony Theatre production of A Raisin in the Sun at the Kirk Douglas Theater. The other kitchen, well kitchens, belong in Director David Cromer's production of Our Town at the Broad Stage.

Back to the eggs. Well, not just the eggs, but how each production tackles the eggs and the art of the theatre.

An Irish playwright once tried to convince me that all of western theater could be explained by the differences between how Catholics and Protestants approached communion. Is it the thing or is it symbolic of the thing? Do we see the eggs? Or are we asked to imagine them? 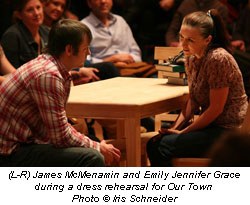 In Thorton Wilder's Our Town, we, the audience, are asked to imagine the eggs, the town, the scenery, the moment we fell in love. As we make our way through Grovers' Corners, the Gibbs and the Webbs become stand-ins for all of us.

Lorraine Hansberry's A Raisin in the Sun uses a microscope rather than a telescope. We follow this African-American family, the Youngers, in the 1950's as a $10,000 life insurance check forces them to confront their unrealized dreams and their most closely held values.

Now this would be little more than an academic exercise or a theoretical battle between the representational and the presentational if both plays weren't profoundly moving and beautifully acted. What's fascinating is how each works its magic; how each reaches for the souls of its audience.

In A Raisin in the Sun actor Kevin T. Carroll embodies the frustration and bitter resentment of Walter Lee: a man whose society, whose world, is conspiring against him. His performance confronts us with a stunted passion so honest we can't help but be moved by it. He invites us to bear witness to his journey and experience the world through his eyes.

In Our Town actor Jennifer Grace's Emily Webb looks back longingly on her life. Again, we see through Emily's eyes but they become a window to our own lives, our own mortality. We are awakened not to the lost details of her life but to the moments we are all missing.

The universal. The specific. Both productions stir our souls and open our eyes. Whether it's Emily helping us see the exquisitely mundane beauty of the everyday or Walter Lee dreaming of laying a better world at his son's feet - we recognize the humanity and we leave the theater a little more alive.

Isn't that what a classic is supposed to do?

Our Town plays through February 12 at the Broad Stage in Santa Monica.

A Raisin in the Sun plays through February 19 at the Kirk Douglas Theatre in Culver City.

Banner image: (L-R) Brandon David Brown and Kevin T. Carroll in the Ebony Repertory Theatre production of A Raisin in the Sun. Photo by Craig Schwartz