Okay, remember like 10 years ago, seeing stories about back yard wrestling leagues? Think less Greco-roman and more WWF: suburban teenage boys with names like "The Destroyer" jumping off the roofs of their stucco tract homes and slashing their foreheads with razor blades for bloody effect. It got to be such a thing that real wrestling... well professional wrestling actually started warning kids "Don't try this at home. The men in tights bashing each other with folding chairs are professionals."

Well, those adolescent wrestling leagues are the inspiration for playwright Mickey Birnbaum's world-premiere play Backyard at the Echo Theater Company.

We're out back at Chuck's place - sorry, the Destroyer's place. He and his buddy Ray, "The King of Tears," are getting ready for their next big match. It's already posted on Facebook. Trouble is, Chuck's struggling to hammer out the story line. What exactly should happen after The Destroyer comes back from the dead? Who's going to feed him the "the elixir of life?" His Mom could it, after all she's into it, tough as nails - who wouldn't be raising a kid on her own - but she thinks the whole elixir bit is lame. No dad to do it - he skipped town years ago leaving little more than a stack of Van Halen records. Ray's Dad's gone too. Well, not gone, just on the other side of the border. Ray tosses him packs of Marlboros over the fence while he recounts his glory days in the ring as a luchador.

Before you dismiss Backyard as little more than an adolescent cage match, playwright Mickey Birnbaum is really wrestling with the sagas of good and evil we all tell: how we all grapple with family mythology. Absurdly, and bravely, Mr. Birnbaum spins the metaphor out across the play's two hours. Along the way everyone makes it into the ring in bouts that are simultaneously sexual, primal, bloody, and darkly, darkly funny. 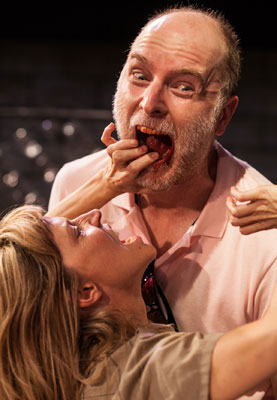 What keeps the play from being more than a clever exercise is the remarkably committed cast. Headed up by Jacqueline Wright and Hugo Armstrong - who at this point should both be crowned LA theater royalty - the cast gives themselves over to not only the mortal combat but more importantly the emotional complexity of these archetypal conflicts. As much fun as the bloody spectacle is, the play really finds its soul in the silent moments the script only hints at: they provide the gravitas.

If you peel away the over-the-top aggression, Backyard is trying to speak to something deeper: how we all are constantly constructing the narratives of our lives, negotiating conflict, and trying to escape the stereotypical roles in which we're cast. The script hasn't completely found it's way to these deeper chords and the ending, while satisfying, doesn't feel completely earned.

Don't let that stop you. This cast is so good, you won't want to miss them. Just be ready to rumble.

Backyard plays at the Echo Theater Company in Atwater Village through July 13.

Running time: 2 hours and 15 minutes with one intermission