When talking about Yuval Sharon and the Industry's new mobile opera Hopscotch, it's helpful to separate the idea of it from the "it" of it.

The idea of it is inspired, massive, complicated and is heir to both the best and sadly the worst of Los Angeles.

The "it" of it is simultaneously uneven and transcendent.

Let's start with the basics. Hopscotch is a theatrical event that unfolds across 24 individual chapters scattered around downtown Los Angeles. The $100 ticket buys you a ride around downtown LA in a series of stretch limos. You and three other audience members experience the show with performers joining you and singing as you travel by car or take in scenes that unfold in site-specific locations.

Now, all the different chapters happening in all those different locations are being wirelessly streamed back to a central hub built in front of SCI-Arc where you can also listen to the whole thing for free through headphones while watching video screens. From a purely technical and logistical perspective, the piece is genius.

Now to the "it" of it. If all the above detail isn't dizzying enough, the chapters are told, or experienced, in a non-linear fashion: so chapter 7 is followed by 22 and then 28, et cetera. The experience is narrative in a Joycean way with you putting the piece together in your own mind - constructing your own whole out of fragments. I got to experience eight of the chapters. Of those, roughly a third felt compulsory, a third were interesting but not stunning, and two were transcendent.

Let's focus on the transcendent.

The first that blew me away was duet between Michelle Shocked and Paul Berkolds. There we were riding through Japan town, looking through rose colored limo windows, smelling a bouquet of flowers, while Michelle Shocked sang longingly about love and the city. Magical. 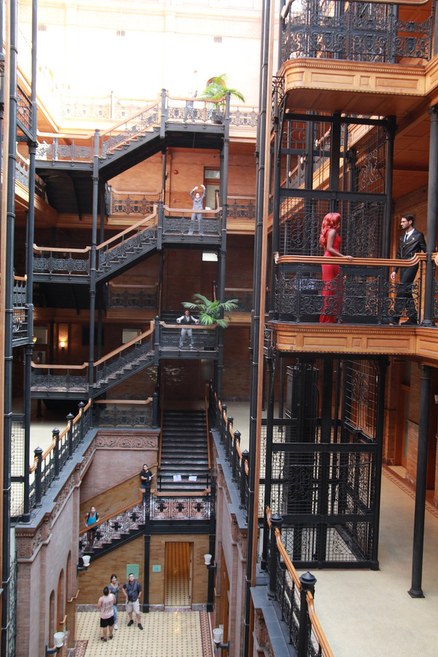 Then, we're dropped off in front of the Bradbury building where a dance piece encompasses the entire interior of that glorious space. We ride up the antique, open-caged, elevator accompanied by our heroine and a saxophone player. Once at the top, the space is filled with dancers, a jazz drummer, an upright bass, as we wind our way through the architecture: site specific performance at its best.

Those two scenes were worth the entire afternoon.

The challenge in the piece, and frankly in Mr. Sharon's previous Invisible Cities at Union Station, is the art's relationship to audience and to the city. While moments in the Bradbury and Michelle Shocked pining for a city of memory connect you deeply with our home, you frankly spend a lot of time in a car ignoring the world outside. I can’t help but feel like that’s a missed opportunity. When the city itself finally comes into focus, ironically, it's on video screens during the finale. I long for the Industry’s work to embrace both the tidy choreography of art and the messy reality of our city.

In the end, we need to celebrate Yuval Sharon's ambition and vision. There is no other performing arts leader in the city who's thinking this big and we could all take a page from his score.

Duration: 90 minutes without an intermission.

Photo: A chapter of Hopscotch is performed in the Bradbury Building (Dana Ross)