The Venn diagram of high art and fart jokes I want you to imagine the Venn diagram where high art intersects with fart jokes.

That sweet spot, if you want to call it that, is the where Sacred Fools latest show "The Art Couple" lives.

The setup for the show is several duos and time periods so stick with me.

The play opens in 1888, Paris and introduces us to the unlikely future roommates Paul Gauguin and Vincent Van Gogh - and to give you a sense of the show's humor there's a whole phlegmatic comedy bit that pokes fun at the difficulty of pronouncing Vincent's name. We learn during a poker game played by Georges Seurat, Auguste Rodin, Toulouse Lautrec, and Gauguin that the somewhat crazy Vincent Van Gogh is trying to start an artists' colony in Arles and he'd love them all to come join him. Vincent, or as this show often calls him, Vinnie is a handful. He's an obsessive and seems to be constantly threatening suicide. That's too much for the other artists to handle but Gauguin's short of cash and despite his dysentery (cue the bathroom humor), Gauguin says what the hell.

So here we have our artistic odd couple - which leads to our historical parallel in 1963.

Next scene has us at the Village Gate jazz club watching Neil Simon scribble furiously in a notebook. It's the end of the evening. A bus boy is getting ready to kick this distracted writer out when he strikes up a conversation. Turns out Mr. Simon has just been paid a bundle for his next script. Trouble is the only thing he's got is a title "The Odd Couple." Other than that he's totally blocked. This mysterious, rugged busboy has an idea - he's got to head to the Catskills, why doesn't Mr. Simon join him and get back to his artistic roots, stop writing all that Broadway cotton candy and make some real art.

So those are our two couples and of course, with a script like this, the worlds are going to coincidentally collide often with some really broad humor.

"The Art Couple" is sort of an odd duck and in many ways echoes the work of Sacred Fools.

On one hand, there's a sort of intriguing central question that seems to be driving at the difference between dedicated artists and commercial hacks. It's trafficking in a recognition of major works of art and the idea that the audience knows enough to laugh at a joke whose punchline is pointillism.

This is also a play with fart jokes, simple humor, and comically pasted on beards that leave you wondering who the joke is on.

Like a lot of Sacred Fools shows it has the feeling of being a really long skit. But then it has a couple of performances that are much deeper than they have any right to be. The playwright Brendan Hunt, who also plays Van Gogh and Ryan Patrick Welsh, who plays that busboy, both give performance that make you yearn for the play to be better, for the basic idea to get more complicated, for this meditation on art to take itself more seriously.

But that's not this play and that's not Sacred Fools. And honestly, that's simple and great. You'll leave feeling smarter than the play but you'll also laugh at more than one dumb joke. And that's fun.

"The Art Couple" plays at Sacred Fools in Hollywood through April 7th.

Running time: 2 hours and 30 minutes with one intermission. 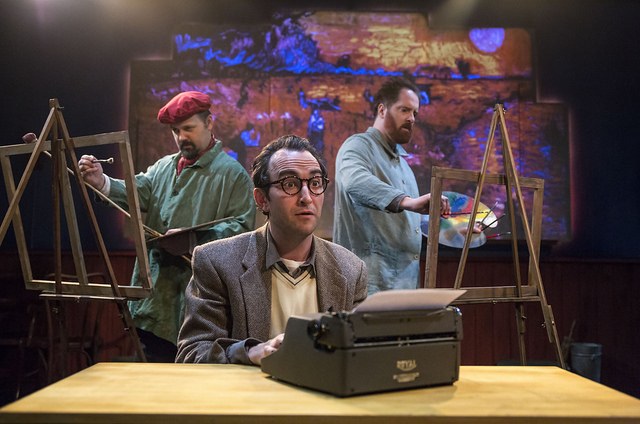