Where Are the Hollywood Clowns? Let's start with what works in Cirque Du Soleil's $100 million spectacle Iris at the Kodak Theatre in Hollywood. 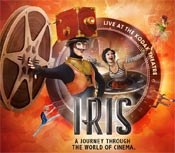 Two scenes before the end of the show, we're on a brick tenement rooftop. Water tower, red neon hotel sign, scantily clad damsel in distress. Our hero, Buster, is trying to save his love from evil gangsters. There's a scuffle and one of the thugs falls backwards off the roof. He plummets 15 feet and then magically.. dare I say cinematically, pops back up as if someone hit reverse on the film. The gangsters spring from fire escape to water tower with stunning precision bouncing off two trampolines concealed in the roof tops. You recognize the clichés of gangster movies brought to life with the undeniable virtuosity of circus performers.

This is the heart of what's been called nouveau cirque. Think back to the traditional circus of your youth. (If Cirque du Soleil is the circus of your youth - stick with me and google "Ringling Brothers"). Three rings, ring master, lions in cages, tightrope, clown car: a lot going on at once and no overarching story or theme.

Then, in the 70's along came folks like the Pickle Family Circus in San Francisco who got rid of the animals and said, 'Hey, what if the juggling, the circus acts were part of a story?' A few years later, Cirque du Soleil is founded in Montreal and goes on to become the most financially successful nouveau cirque of all time with roughly $900 million in annual revenue.

Back to the rooftop: what makes the trampoline act stunning is not just the skill of the performers but the marriage of circus act and story. The mid-air flip becomes an emotional metaphor. Suddenly the magic of film special effects is recreated live with the human body.

I wish I could say that all of Iris is as successful. Instead, the show feels like a bunch of Post-Its on a concept board titled "The magic of cinema." 'Okay, the aerialists go there, Asian acrobats here. What do we do with the contortionists?' Now some of those ideas are stunning: a giant skirt that's a working zoetrope, projections that animate and distort the acrobats in real time, a series of rooms that evoke a filmstrip on its side. But missing is the through line, you bounce from circus act to circus act and what keeps the show aloft, literally and metaphorically, is the virtuosity of the performers… with one painful exception: the clowns.

Now, clearly there are clowns in Hollywood… but rather than draw on the rich history of a Charlie Chaplin or the Marx Brothers, Iris' clowns are a bit more pedestrian - we've got an actor struggling to break into Hollywood which could be funny but instead it's sort of pathetic.

Which is a tricky for a show that Cirque du Soleil, the Kodak Theater, and Hollywood hope becomes a major tourist attraction for the next ten years. Bottom line: the circus is stunning, the story is lacking, and an opportunity's been missed.

Cirque du Soleil's Iris is playing at the Kodak Theater in Hollywood.

For info on the show text the word "curtain" to 69866 and tell me about your favorite Hollywood clown at KCRW.com/theatre.

Where Are the Hollywood Clowns?