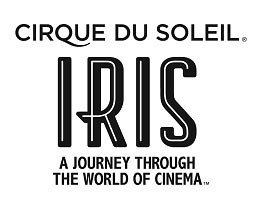 Buster is a melancholy composer in search of true love. Somewhere between reality and make-believe, he spots the girl of his dreams: Scarlett, a naïve actress who longs to become a movie star. But will Buster and Scarlett find each other in the real world?

Through visual language, acrobatics and choreography, all interwoven with the narrative of the show, IRIS brings the splendor, inventiveness and sense of wonder of cinema to the stage.

In an atmosphere of light and shade, two acrobats soar through the air suspended from single or double straps. They take off high above the stage and land with grace and fluidity, delivering a performance that makes one think of an aerial hand-to-hand number.

In an evocation of shadow stories played out on prehistoric cave walls – the very beginnings of what eventually would become cinema – four contortionists adopt striking poses and undulate like dancing flames. The flexibility of their movements is amazing as they are transformed into living sculptures.

Two porters launch their partners into the air to perform stunning feats requiring absolute mastery and control. Generated live by their every move, the kaleidoscopic projections above the acrobats decompose motion to add a poetic dimension to their number.

In a choreography that calls for high-speed precision, performers advance from one frame of film to the next to create the illusion of continuous movement.

The principle of Icarian games – one of the oldest circus arts disciplines – calls for a porter lying on his back spinning an acrobat with his feet. This dazzling number features eight acrobats who literally blur the lines between reality and the impossible as they push the act far beyond its traditional boundaries with cool daring.

Controlled chaos reigns over a succession of highly visual numbers and audacious plunges as a bold allusion to various aspects of filmmaking. The choreography brings the circus disciplines of teeterboard, Spanish web, Russian bars, aerial silk to floor gymnastics and original choreography.

An artist on stage manipulates his broom while above him, a trapeze artist – the embodiment of his dream – performs with fantastic artistry. Their interaction turns into a gentle complicity.

In a tribute to gangster movies and to the work of stunt actors, trampolinists deliver a number packed with thrills on the roofs of buildings, multiplying their astounding leaps, flips and glides in a non-stop action movie atmosphere.

Playing the part of the show’s heroine Scarlett, a young woman balancing on canes performs a number infused with romanticism, subtlety and sinuous strength that captures the already conquered heart of Buster. Before it’s over, they will share a tender kiss.

In an aerial bungee ballet that pays tribute to 3D movies, women in costumes studded with crystal dive and soar in unison from the ceiling above the audience in a thrilling, swirling flight.