Can We Trust Billionaires to Save Democracy? There’s no denying that Nicolas Berggruen, the German-American billionaire founder and president of the private investment company Berggruen Holdings as well as the think tank Berggruen Institute, has benefited from a global capitalist system that has fueled historic inequality. But even he can see how broken the current economic and political systems in place in the West are, so he’s come up with a plan to try to revamp democracy as we know it.

Think of it as “universal basic capital instead of universal basic income,” Berggruen tells Truthdig Editor in Chief Robert Scheer in a discussion about the billionaire’s book, “Renovating Democracy: Governing in the Age of Globalization and Digital Capitalism.” What Berggruen advocates for is a fresh restructuring of democratic governance frameworks that would guarantee adequate living conditions for workers regardless of employment status. At a time in which jobs are quickly being eaten up by rapidly advancing technology, employment should not determine a person’s right to having their basic needs accounted for, the Berggruen Holdings founder and his co-author Nathan Gardels argue in their book.

“What we are proposing is, as opposed to redistributing through taxes, … why not give everyone a chance from the beginning? And to put it in concrete examples, if [going forward], if one creates a business, let’s say in California, as a compromise to potentially, you know, pay a different rate of taxes, let’s say lower, one would give a stake [of] the business to the state. So that the state, and therefore all citizens who are part of the state, would really become owners in the business in the future of, hopefully, something that is successful,” Berggruen tells the Truthdig Editor in Chief in the latest installment of “Scheer Intelligence.”

Scheer, however, challenges the billionaire with a potential blindspot in Berggruen’s plans: Can we trust elites, well-intentioned and otherwise, to save democracy when they played a huge role in pushing the world to the dire straits it finds itself in currently?

“It seems to me most of the progress we’ve made in society has come from below. You know, people demanding civil rights, demanding women’s rights, demanding a living wage as now happens,” says Scheer. “That, to my mind, is the key issue: Does progress come from enlightenment on above, when they feel their situation is at risk? Or does it come from, yes, a notion of democracy, of complaint from below, and a demand that something happen?”

“We need change. We need new ideas. We are very open, and actually, we love anyone’s ideas, as long as they’re truly new and fresh. And they can come from any place. And I agree, very often they will come from not only below, but from unexpected places,” responds Berggruen.

Listen to their full discussion which spans from analysis of current trends in democracy to thoughts on how China could serve as a model for the West. 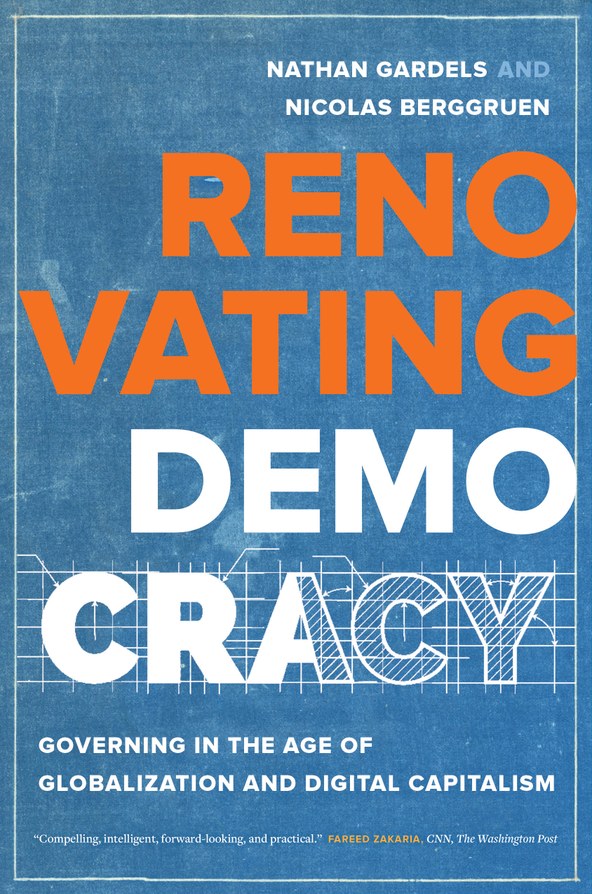 The front cover of “Renovating Democracy: Governing in the Age of Globalization and Digital Capitalism” by Nicolas Berggruen and Nathan Gardels. Photo courtesy of Berggruen