Israel Has Always Been A Contradiction Just five years after the state of Israel was founded in 1948, the family of Larry Gross, the former director of the University of Southern California’s  Annenberg School of Communication, moved there. Gross, who is also the founder and editor of the International Journal of Communication, joins Robert Scheer on this week’s installment of “Scheer Intelligence,” to give listeners his perspective on the nation he lived in as a boy and teenager. With Passover right around the corner, Scheer grounds the discussion on Israel in its biblical past as well as its present as Israel receives international plaudits for having one of the fastest COVID-19 vaccination programs in the world, despite practicing medical apartheid. (Listen to the recent “Scheer Intelligence” episode with Mideast expert Juan Cole on this very topic here.)

The professor and author of several books, including “Up From Invisibility: Lesbians, Gay Men, and the Media in America,” shares the many complex historical and personal reasons his family ended up moving to Israel in the 1950s and explains what he witnessed there during his most formative years. Gross describes a young nation that not only exhibited racism towards Arabs, who were treated as “uncivilized, unintelligent, undeveloped, primitive,” but also towards non-white Jews.

“There was always a deep and relatively undisguised element of racism in Israel,” says Gross. “There was a component of racism against Arabs, [but racism] was also manifest, undisguisedly, if anyone was paying attention, in the way the Jews from Arab countries--the Mizrahi Jews, the Sephardic Jews--were treated.

“Israel, on the one hand, actively undermined the circumstances that Jews were experiencing in Egypt, in Morocco, in Algeria, in Tunisia, in Iraq, in order to motivate them to come to Israel. [These Jews] were being brought in in order to raise the population of Israel, but there, they were unambiguously second-class citizens. They were not treated remotely the same way as were immigrants from Europe or from the United States, from Western countries, who were given much better treatment in terms of housing, in terms of employment and conditions.”

In 1967, after the Six Day War with Egypt, Jordan and Syria, Israel took another step away from democracy as it occupied the Palestinian territories of the West Bank and Gaza. More than half a century later, Israel has been labeled an apartheid nation, as extremist settlers occupy more and more of the West Bank, and Gaza, which has been described as an “open air concentration camp” is routinely subjected to violent attacks by Israeli forces. Scheer, who was reporting on the region during the Six Day War, relates what the Israeli general, politician and peace crusader Moshe Dayan told him at the time regarding his country’s occupation of the Palestinians’ territories. 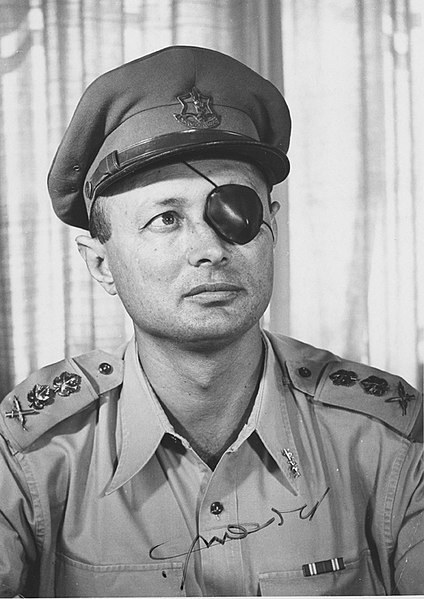 Photo by the Israel Defense Forces and released to Public domain by the Israeli Defence Forces Spokesperson's Unit.

“[When] I interviewed him, [Moshe Dayan] said that, ‘You come back in 10 years and we're still here as occupiers, it's the end of Israel as an ideal.’”

Gross argues that Dayan and other “generals-turned-politicians” were behind the proliferation of armed settlements built in the West Bank that fueled a “fixation on armed outposts for security, despite the fact that their military supremacy was never challenged after '67.” The Communications professor, however, adds that Dayan was right about the moral corruption Israelis would undergo as occupiers.

“What Israel has been able to do is to cloak itself in an aura of victimhood [rooted in the Holocaust] while they're oppressing [Palestinians],” says Gross. “It is soul-destroying for Israel to put its young people in the army and place them in a position of behaving [like] brutal prison guards, treating people--children, women, men--in that dehumanizing fashion.”

So how do Israelis sleep at night? Gross, who says he is as critical of human rights abuses by China and the U.S., among others, as he is of Israel, explains:

“Tel Aviv, which is by far the largest population concentration in Israel, is often referred to as a bubble,” he adds. “What that means is, you can live in a cosmopolitan, prosperous, Mediterranean city, and be unaware of what's happening 10, 20, 30 miles to your east because it's constructed that way. There's a wall. There's a barrier. It's out of sight and out of mind. And that's how you can live with it, that's how you can do it.”

He goes on to draw a parallel to the way the United States has been at war in Afghanistan and Iraq for over 20 years now, and yet Americans seem oblivious to this reality due to geographical distance. Listen to the full discussion between Gross and Scheer as they also examine how the American government and its people have played a critical role in the oppression of Palestinians, and what could happen in the coming years as more and more American Jews oppose Israeli apartheid.