Santa María Tavehua is a tiny village in the hillsides of southern Mexico. It is known for its ceramic arts made from an indigenous orange clay. For centuries, the people of Tavehua made pots and plates, cups and bowls to barter and trade among themselves. In the modern economy, their work shifted to decorative pieces, specifically these little bunnies playing instruments. In recent decades, their ceramic work has found its way into homes and gardens all over Europe and the United States. Sonic Trace follows one figurine, a trombone-playing rabbit, from the hands of her creator in the highlands of Oaxaca, into the global marketplace. 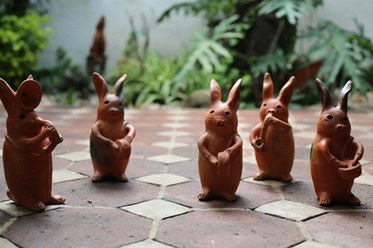 This story was produced by Anayansi Diaz-Cortes and Eric Pearse-Chavez. The editors wee Jacob Conrad and Deborah George. Sonice Trace is part of Localore and the Association of Independents in Radio (AIR). It's funded by the Corporation for Public Broadcasting.